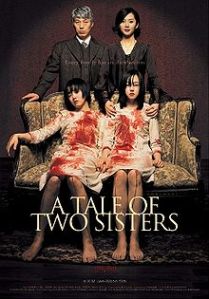 I know it’s been a while since my last post, but I thought I’d come back since I’ve settled into classes (at college) and I just watched a fantastic foreign horror film. For my girlfriend’s birthday we sat in front of my computer and just watched A Tale of Two Sisters. First impression? Stylistically and theatrically terrifying. It’s something about the Asians, but their movies are at least 100 times more terrifying than ours. (Probably why we steal and remake all of them in a less horrifying way.)

Now I can’t get into specifics, but this story is about two sisters. Obvious. And a dad (sad), and a stepmom (evil, of course). The deaths of the past come back to haunt the family as they try to settle down into a normal rhythm in their elegantly Western beach house. (Strange.) My girlfriend Kim is a big fan of Asian horror movies, and I find myself intrigued in how foreign horror films seem to capture horror in a different way, but one not too far from our own concept of fear.

This movie, stylistically, was fantastic. Every shot seemed crafted for a purpose, for a reveal, for the ultimate experience in tension. Every shot, from the pans, to the turn around handhelds, to even the still shots, left me breathless in their scope of capturing the emotion on screen, without words. This, coupled with the seemingly wordless actions of the actors was literally phenomenal. You get a sense of the stepmother’s (Jung-ah Yum) anger and frustration with her new family, and the desperation of the daughters(Su-jeoung Lim & Geun-Young Moon), all beyond the control of the helpless father (Kap-su Kim). With every new scene, you are asked without words to figure out for yourself exactly what just happened and what it means in the bigger picture of the film. Some may find this style to be too confusing and frustrating, but the ambiguity should leave most viewers with their own interpretation, a nice way to end films for me.

All in all, this movie was quite a good film and I’d definitely recommend it for true vintage, thriller film buffs. The director is fantastic and his idea of story goes far beyond what you see on the screen. For another good Ji-woon Kim film, definitely check out The Good, the Bad, the Weird. (Great acting and action.) I might even review that one soon. And for A Tale of Two Sisters American, not so good counterpart, check of The Uninvited (2009) featuring Emily Browning and Elizabeth Banks. I give A Tale of Two Sisters a 9 out of 10.

My loves in life are horror movies, metal, and science fiction. But that's not all I will be reviewing. I'm going to run the gambit on movies, music, books, and maybe a video game or two. Whatever I can get a hold of, I'm going to review, new and old. You can take my opinions if you want, but in the end, it's what you decide. END_OF_DOCUMENT_TOKEN_TO_BE_REPLACED
This entry was posted on Wednesday, February 2nd, 2011 at 7:29 AM and tagged with A Tale of Two Sisters, ambiguous movie endings, asian, confusing films, Elizabeth Banks, Emily Browning, evil stepmom, foreign horror films, Geun-Young Moon, good reveal shot film, great cinematography, horror films, Ji-woon Kim, Jung-ah Yum, Kap-su Kim, sad dad, stylistic, Su-jeoung Lim, terrifying horror movies, The Goo the Bad the Weird, The Uninvited, theatric, true vintage thriller films, wordless acting and posted in Movies. You can follow any responses to this entry through the RSS 2.0 feed.
« The Fighter (AKA, Christian Bale)
The Roommate: Crap or Subtle Genius? »