Okay, so let me start off by saying Tony Jaa makes me want to poop my pants. He is insane. Amazing. The things he can do with martial arts are just unspeakably ridiculous. He is hands down the most lethal man on the face of the planet. Okay, got that out of my system. But seriously. Ever since I found The Protector at my library and took it home to watch it, my pants have never been clean. Now to the movie at hand. 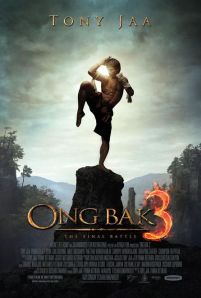 Tien (Tony Jaa) is a defeated warrior in the fourteenth century who has been captured and beaten to death. It is important to note that this is the third in the trilogy, although the first takes place in modern day and has nothing to do with Ong Bak 2 or 3. Tien was trained in the mountains in the ancient martial arts, bretrayed by his clan (in Ong Bak 2) and kills the very man who taught him those arts and killed his father. Pretty standard.

What’s not standard in Ong Bak 3 is what makes this movie stand out. The things they do to Tony in this movie are ridiculous. This movie is brutal. The torture is insane. And after all that, his entire body disfigured and broken, he comes back to beat the hell out of all those who oppose him. No mercy. With every movie, Tony Jaa improves his skill and dominates more than before with breathtaking moves. It’s a sight to see. Tien learns martial arts through the art of dance, (in an all to long scene, I might add) and uses his ridiculous skills in Muay-Thai boxing to destroy everyone. Literally, run train on all his foes.

That’s not to say that the whole movie has no plot. It’s pretty much like any other martial arts movie. But, Tony Jaa one ups every single movie by what he does. No stunt doubles, no wires, no CGI, no breakaway shots. Pretty much what you see in the movie, was done by Tony Jaa himself. It’s incredible. I know it may seem that I’m in love with Tony, but I’ve been watching martial arts movies for a while, and really, to be honest, nothing compares.

Tony Jaa and Panna Rittikrai, Tony’s mentor, did an amazing job writing and directing the Ong Bak series. Petchtai Wongkamlao is always funny as the bumbling partner that seems to always appear in all of Tony Jaa’s films, the cinematics and scenery of the shots in Ong Bak 3 are unrivaled, and the fight scenes will baffle you into disbelief. This movie, although not as good as Ong Bak 3, is still definitely worth the watch. It ends the series well and keeps me wanting more. Watch out rest of the world, Thailand has an ace in the hole. 10 OUT OF 10.

My loves in life are horror movies, metal, and science fiction. But that's not all I will be reviewing. I'm going to run the gambit on movies, music, books, and maybe a video game or two. Whatever I can get a hold of, I'm going to review, new and old. You can take my opinions if you want, but in the end, it's what you decide. END_OF_DOCUMENT_TOKEN_TO_BE_REPLACED
This entry was posted on Saturday, February 19th, 2011 at 6:30 PM and tagged with 14th Century, dance fighting, martial arts movie, most lethal man on the planet, Muay Thai Boxing, no breakaway shots, no CGI, no stunt doubles, no wires, On Bak 2, Ong Bak, Ong Bak 3, Panna Rittikrai, Petchtai Wongkamlao, poop in the pants worthy martial arts, Thailand films, Tien, Tony Jaa and posted in Movies. You can follow any responses to this entry through the RSS 2.0 feed.
« Wolf’s Rain (Strayyy)
Ouran High School Host Club (Not as strange as I thought) »