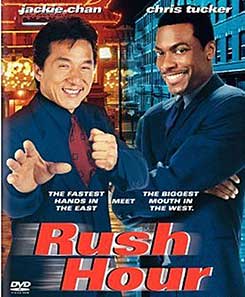 My loves in life are horror movies, metal, and science fiction. But that's not all I will be reviewing. I'm going to run the gambit on movies, music, books, and maybe a video game or two. Whatever I can get a hold of, I'm going to review, new and old. You can take my opinions if you want, but in the end, it's what you decide. END_OF_DOCUMENT_TOKEN_TO_BE_REPLACED
This entry was posted on Wednesday, March 23rd, 2011 at 8:48 PM and tagged with black humor, Brett Ratner, China, Chinese version of Arnold Schwarzenegger, Chris Penn, Chris Tucker, culture shock, Detective Carter, Detective Lee, genres, hilarious force, hilarity ensues, Jackie Chan, Jackie Chan at his pique, Jet Li, Junato, Ken Leung, kidnapping, New York, Penn brothers, ransom, Red Dragon, Ross LaManna, Rush Hour, Rush Hour series, Sang, Saw, sick stunts, stereotypical, The Abyss, The Forbidden Kingdom, things to review, Tom Wilkinson, Top 10 favorites, X-men and posted in Movies. You can follow any responses to this entry through the RSS 2.0 feed.
« Xam’d: Lost Memories, Nice Catch
When They Cry… Again… »