Halo: Reach. Ehhhhhhhh… Could be good.

So I beat this game in about… 5, maybe 6 hours. My roommate Ian and I love the Halo series, and my love goes back to good old 5th grade. Ah yes, my first M for Mature game and I loved every minute of it. (It’s really not as violent as people think.) We played through all 8(?) levels of mayhem (normal to start, of course) and found the game to be satisfactory to a point. Although Halo: Reach may be the end of the Halo series, but we wish it wasn’t.

First of all, plot. Great! Halo: Reach functioned as the precursor to the Halo plot line. Drawback to that? No badass Master Chief/Cortana, and no conclusion to the Halo 3 storyline. That, to me, is a disappointment. So Bungie better get on Halo 4, so we can all see what happens to Master Chief. I 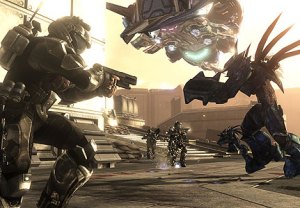 Here's a little taste of gameplay

know for damn sure he didn’t die. (Oh, and that “Great!” I used? Sarcasm. Come on Bungie. It was like dropping us into WWII and then saying that it was going to lead to Vietnam. What?)

Alright, gameplay. The graphics were great. It was Halo 3 quality all the way in that regard. The locales were cool and it really felt like a planet. I especially liked the cut scenes that occur when you assassinate an elite with your knife, great way to introduce a little more of a kick ass nature to the Spartans that came before Master Chief. This game had a little bit more of a gritty quality to it than the other Halos. This gave it more of a darker look and kept you a little more on edge during the game. This is a great approach due to the ending.

Features of the game. Quite great. (Besides certain weapons.) Okay, you can run faster, jetpack, even create bubble shields on demand. And you don’t have to keep the same feature for long. You can switch it up based on the battle ahead, and this tactician type approach is just what I look for in games. The thing that detracts this from being an all-time great Halo game? The weapons, for sure. I felt that at this point, the creators at Bungie put all the previous weapons into a hat and decided they would draw out two at a time

to decide which weapons they would mix on the game. I mean, come on. Plasma assault rifle? More useless than it sounds. Needler carbine? How does that even work? Only weapon that wasn’t a total letdown: pistol. That thing can do work, just like in good, old original Halo.

I guess when it comes down to it, the plot of this game doesn’t matter. It introduces the Covenant, but doesn’t really explain why they’re on Reach. So you get a rag tag group of Spartans, have them fight towards some superfluous mission goal, and then let the chips fall where they may. Cool ending though, tying in the Pillar of Autumn and Keyes and all that. Pretty neat-o. Makes you feel like you are the gears behind the last resistance against the Covenant in a way.

There are some other features of the game I haven’t really delved into yet. You can now play firefight, a survival type swarm based attack where you (and a friend) must survive through waves of Covenant. Actually, that reminds me. Best part of this game? NO FLOOD. A game with no Flood becomes ridiculously easier and more enjoyable. Not to say I didn’t freak out the first time I played Halo when the Flood jumped me, but let’s just say that every time I hear the music of that level way back when, I do not feel comfortable. There’s also something about customizable armor/gear based on points you earn during the game? That’s always great. (Although Bungie should really pull back and reevaluate what it means to earn an achievement. Some of their are ridiculous, the only way to earn them is to cheat.) There’s plenty more for me to discover, and, once I do, I’ll be sure to let you guys know. Unless I decide to trade Halo: Reach in for another game, I’ll let this game sit as a 6 out of 10.

My loves in life are horror movies, metal, and science fiction. But that's not all I will be reviewing. I'm going to run the gambit on movies, music, books, and maybe a video game or two. Whatever I can get a hold of, I'm going to review, new and old. You can take my opinions if you want, but in the end, it's what you decide. END_OF_DOCUMENT_TOKEN_TO_BE_REPLACED
This entry was posted on Monday, April 18th, 2011 at 12:25 PM and tagged with 6 hours of gameplay, 8 levels, achievements, bubble shields, Bungie, Cortana, Covenant, customizable gear, darker look, decent gameplay, elite assassination, firefight, first person shooters, Flood, good graphics, gritty quality, Halo 1, Halo 2, Halo 3, Halo 3 quality, Halo 4, Halo series, Halo weapons, Halo: Reach, Halo: Reach weapons are letdowns, jetpack, Keyes, M for Mature games, Master Chief, needler carbine, no Flood, not as violent, on edge, Pillar of Autumn, pistol, plasma assault rifle, precursor to Halo, rag tag group of Spartans, Reach, run faster, Spartans, survival type game, switch features, tactician and posted in Video Games. You can follow any responses to this entry through the RSS 2.0 feed.
« The Protector: Tony Jaa Destroys All
My Bride is a Mermaid »