And yet I keep coming back. I know I’ve been gone for a short while, but those college finals are creepin’ up on me. But I’m here for yet another anime review, and this time, it’s academically related. 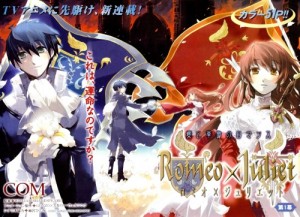 So this time in Anime Club, we watched RomeoxJuliet, the slightly altered fantasy version of the classic Shakespearean teen angst play, Romeo and Juliet (not much of a title change). But this time, it’s different. No spoilers (already had it ruined for me before I saw the ending) but it’s not as different as you’d think. Slightly different. Okay, kind of a major plot twist ending. And yet, still romantic and tragic. Yeah…

So this is the story of Juliet “Insert ridiculously long middle name here” Capulet, the remaining member of her noble family who were wiped out 14 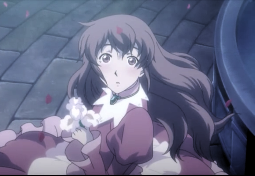 years ago by the evil Montagues. It was a good thing she had Conrad (who was only a badass in his earlier years. Now he looks like a whiny old coot.) or else she may not have survived, thus, no need for this anime. But anyways, now her and her family’s followers are out for revenge. But for the first 5 episodes or so, she doesn’t know she’s of royal descent. But yeah, of course that changes her and gives her a bit more of an edge and a chip on her shoulder. It’s expected.

But what does she do before she learns this sworn hatred of the ruling Montague family? She falls madly and irrevocably in love with the son of that 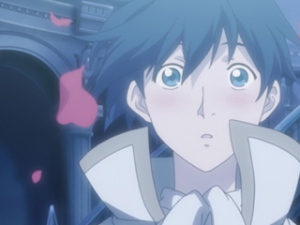 evil bastard, Romeo Montague. I feel like it was a love based on herbology, but that’s for another review. Just know: irises. So this complicates things. OH, AND DID I FORGET TO MENTION? They have been passing off Juliet as a boy for the last 14 years of her life. She’s been Odin, knowing she was a girl, but she never knew why. Now she does. And now, Romeo is sexually confused. Add that little twist to your lemonade why don’t you.

So the rest of this little Twilight romance (yes, there are references) is played out in Neo Verona, a floating island above God knows what and it’s falling apart. That’s cool. But these little lovebirds must decide what’s more important, love/angst or their families, and we all know how that one goes. But it’s a great twist and quite worth a look see.

Things I liked. The use of other characters from other plays. If only in name, this was a great tribute to Shakespeare, and, being in a Shakespeare class now, I can appreciate the sentiment. Again, I also liked this anime because it didn’t follow the exact plot of Romeo and Juliet. It used the new additions and twists to carry along a well told out story to a new end. Quite interesting if I do say so myself. Looking back on the list of voice actors, I wish I had watched this dubbed and not subbed. J. Michael Tatum as William “Willy” Shakespeare? Thanks very much I’ll take that.

The animation/art was quite good and the plot was ripe for the homages. The ending reminded me of Xam’d untimely end, but I think that’s the only reason I liked it. Otherwise the ending was terrible. The explanation, the random use of the tree of life… I was a little thrown off by how out of place it all was and why any of it was relevant. You have this nice little Romeo and Juliet plot zooming along and then you throw that tree/world wrench in there. Completely unnecessary. Other means to end the anime would have been appreciated.

Other than that, quite a good show. The story empowered Juliet instead of making some damsel in distress out of her, and it actually turned the story around completely. It made Romeo into the princess in the tower and quite 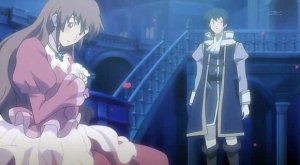 How cute. He's "watching" her from afar.

the whiny, unlikeable counterpart to Juliet. It took a while, but he came into his own. Tybalt destroyed people, I loved the Curio/Francisco (Eric Vale, by the way) dynamic, and it was all good (sort of) in the end. If you’re a Romeo and Juliet fan, or a Shakespeare fan in general, check this out, it’s worth the watch/twist. 6.8 out of 10.

Did I mention this anime ruined Josh Groban’s “You Raise Me Up” forever. Well, it sorta did. But here it is all the same.

My loves in life are horror movies, metal, and science fiction. But that's not all I will be reviewing. I'm going to run the gambit on movies, music, books, and maybe a video game or two. Whatever I can get a hold of, I'm going to review, new and old. You can take my opinions if you want, but in the end, it's what you decide. END_OF_DOCUMENT_TOKEN_TO_BE_REPLACED
This entry was posted on Monday, May 2nd, 2011 at 12:41 PM and tagged with Anime Club, anime review, characters from other plays, Conrad, cross dressing, Curio, damsel in distress, Eric Vale, Escalus, fantasy, floating island, Francisco, girl dressed as boy, herbology, homages, irises, J. Michael Tatum, Josh Groban, Juliet Capulet, major plot twist ending, Montagues, Neo Verona, noble families, Odin, play, princess in the tower, romantic, Romeo and Juliet, Romeo Montague, RomeoxJuliet, royal descent, Shakespeare, Shakespearean, slightly altered, teen angst, terrible ending, tragic, tree of life, Twilight romance, Tybalt, whiny old coot, William Shakespeare, Willy, woman empowerment, Xam'd, You Raise Me Up and posted in Anime/ T.V.. You can follow any responses to this entry through the RSS 2.0 feed.
« The Room: Greatest Comedic Failure Ever Made
Tron: Legacy »

One response to “RomeoxJuliet: Neo Style”