Rise of the Planet of the Apes

So the second I saw that this movie was coming out, I became instantly pumped to see it. I thought the Planet of the Apes with Mark Wahlberg (and Tim Roth mind you) was fantastic, although it didn’t receive the best of reviews. I thought, “Hey, if they’re willing to take a chance on another one, going back to tell the origins of the rise of the apes, then I gotta see this.” And see this I did. And I loved every minute of it. It wasn’t the fuel-injected adrenaline ride you expect from the trailers, it delivers a more insightful, sensitive side to Caesar and his rise to intelligence.

The Rise of the Planet of the Apes all starts with a cure for Alzheimer’s. With the AZ-112 cure, Will Rodman 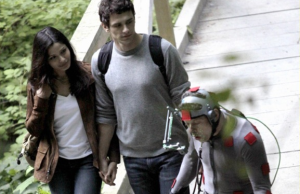 (James Franco) has found, through ape testing, that it does in fact, reverse the effects of Alzheimer’s. With this amazing breakthrough, all those affected across the world could be cured of this fatal disease. But in a horrible accident, it appears as if the cure is not yet ready for human testing. But, as its discovered, it is sort of ready for human testing (hard to explain). But one of the apes who was tested with the AZ-112 is in fact, hyper-intelligent. Accelerating through intelligence at an incredible rate, Caesar as he is come to be known lives with Will and learns like an overly strong young boy. 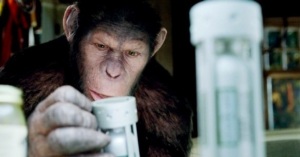 Caesar and the cause of destruction, AZ-113.

Over the years, Caesar comes to resent his entrapment indoors and wishes for a more stimulating environment. But when he acts out, he is punished and taken to a wildlife “reserve” for apes. Horribly mistreated, Caesar uses his intelligence to begin the fall of mankind. I shouldn’t divulge anymore, but its well worth the watch. One thing I gotta say is that the 3-D animated apes in this film are phenomenal. The use of intelligent sign language, the movements and natural positions and actions of the apes implies that the makers of this movie really put in the effort to study apes. This build-up and framework of the apes and their rise to dominance really creates a background for an incredible plot.

And no, this movie isn’t completely unbelievable. At first, the apes’ goal are to find their own home and live there peacefully without abuse. Using their new found intelligence, they do so. But there are adverse effects to the AZ-113 (new Alzheimer’s drug) this time. And this creates a problem that causes the destruction of the humans of this world. So no, to all you out there that may say, we’d destroy those damn, dirty apes. We destroyed ourself.

With a few notable actors, this movie really brings together a good cast to tell a good story. With James Franco as the research scientist in search of a cure for 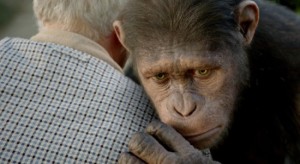 his father (John Lithgow), I feel the pain that losing a father could cause in this situation. It pains Franco to see his father in such a situation where he is no longer himself. And so does Caesar. Freida Pinto gives a good supporting performance for James Franco as his fellow ape lover and wife, Caroline Arahna. Tom Felton, as I’m sure most H.P. fans would agree, comes out of left field in this movie as a jerky daddy’s boy who just doesn’t like those not like himself (AKA Apes). I did enjoy his character and am happy to see he’s getting work after the H.P.’s are over. And David Oyelwo gives a good performance as the greedy exec, Steven Jacobs (Sounds like Steven Jobs… JK.)

So, all in all, this film delivered. Even Andy Serkis got in on the action as the voice of Caesar. It’s no wonder that Weta Workshops was the creation force behind the apes. With the fluidity of the story and the focus on the apes, this movie itself even became taken over by the apes. I also found it very interesting that I could identify certain apes in this film with their counterparts in the Planet of the Apes (aka, Tim Roth as Caesar, Korba as Cary-Hiroyuki Tagawa’s ape Krull, and Buck the gorilla as Michael Clarke Duncan in the film as well.) With this connection and the set up for two more films from Rick Jaffa and Amanda Silver, this could be a promising trilogy. 9.2 out of 10.

My loves in life are horror movies, metal, and science fiction. But that's not all I will be reviewing. I'm going to run the gambit on movies, music, books, and maybe a video game or two. Whatever I can get a hold of, I'm going to review, new and old. You can take my opinions if you want, but in the end, it's what you decide. END_OF_DOCUMENT_TOKEN_TO_BE_REPLACED
This entry was posted on Wednesday, August 17th, 2011 at 5:57 AM and tagged with 3-D animated apes, accident, Alzheimer's, Amanda Silver, Andy Serkis, ape testing, AZ-112, AZ-113, Buck, Caesar, Caroline Arahna, Cary-Hiroyuki Tagawa, damn dirty apes, David Oyelwo, disease, fall of mankind, father, fluidity, Freida Pinto, Gorilla, Harry Potter, human testing, hyper-intelligent, insightful, intelligent, James Franco, John Lithgow, Korba, Krull, Mark Wahlberg, Michael Clarke Duncan, movements, natural actions, origins, Planet of the Apes, Rick Jaffa, Rise of the Planet of the Apes, sign language, Steven Jacobs, Steven Jobs, study apes, Tim Roth, Tom Felton, trilogy, voice, Weta Workshops, wildlife reserve, Will Rodman and posted in Movies. You can follow any responses to this entry through the RSS 2.0 feed.
« Taken: Liam Neeson Will Chop Your Neck
The Legend of Awesomest Maximus »