The Onion Movie: Film News at its Finest 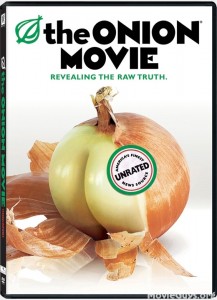 So I’m sure there are those of you out there that follow The Onion News Network and enjoy all their satirical articles and videos. But the pinnacle of The Onion News Network? The Onion Movie. This movie takes all the best things of the 2000’s and put it all together into one satirical piece. With lead news anchor Norm Archer (Len Cariou) this movie destroys America and everything that has laid underneath its seedy underbelly for the last 100 years.

The layout for this movie is fantastic. Interspersed with reports from Norm (almost SNL style but with a serious delivery), this movie goes through a wide range of staged skits that connect one to another, characters bounce in and out in some 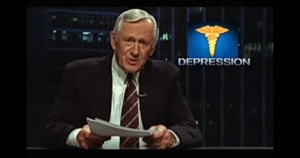 wild ride of hot topics of 2008 and before. It’s pretty much ridiculous. I mean, a lot of the skits deal with stereotypes, racism, failed products, the American war machine, economy, and entertainment industry. In this movie, nothing is safe. And I loved every minute of it.

With my second time viewing it and showing it to an Onion News virgin, it was fantastic to anticipate all the sketches that were coming. I mean come on, the Queen Nathan? That is completely unexpected and a slap in the face with homosexuality’s member. The unknown stereotypes? I mean, who knew Peruvians jump in to save the day and shoot laser beams? With a multitude of black jokes (alcoholics, robbers, intelligent black men in search of the local library via asking a bartender, etc.) and a complete shakedown of the current sex fueled pop music scene (Take Me from Behind), people are getting destroyed. 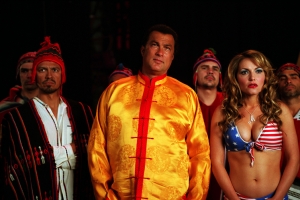 A trio for the ages!

And how does this movie summarize? A complete collision of all characters and situations. A terrorist hijacking of the ONN studio in leu of ONN selling out to the corporate machine taking over with their damn annoying penguin? Perfect. Let’s hope those Peruvians come to save the day (Wink, wink). My favorite sketch? Obviously it has to be the white man mistaken for a black guy. I think that’s what all wiggers (white kid posers) deserve. Don’t dress all killer gangster unless you expect to pay the price of being hilariously profiled. Oh, and Cockpuncher. That’s a legit movie I would see with Steven Seagal. He’s a master and not that many people know it, but, come on, if he punched your cock, you’d notice in a hurry.

I could keep going on about every sketch and just how excellently they’re pulled off with an amateur cast of serious comics. With the help of Todd Hanson and Robert D. Siegel, writers of the film and directed by Tom Kuntz and Mike Maguire, this film delivers without the flash. Just like the real news. (Weird fact, Robert D. Siegel wrote the screenplay for The Wrestler? What a twist! Shows you how ballin’ these guys are.) So check out this little satirical film of the American Machine. It’s well worth Brendan Laroux, and you gotta support a hockey player without legs or wrists. 8.6 out of 10.

My loves in life are horror movies, metal, and science fiction. But that's not all I will be reviewing. I'm going to run the gambit on movies, music, books, and maybe a video game or two. Whatever I can get a hold of, I'm going to review, new and old. You can take my opinions if you want, but in the end, it's what you decide. END_OF_DOCUMENT_TOKEN_TO_BE_REPLACED
This entry was posted on Friday, August 19th, 2011 at 10:12 PM and tagged with 2000's, 2008, alcoholics, America, American war machine, black jokes, Brendan Laroux, Cockpuncher, corporate machine, economy, entertainment industry, film news, handicapped, hockey player, homosexuality, hot topics, intelligent black men, laser beams, Len Cariou, Mike Maguire, Norm Archer, ONN, penguins, Peruvians, profiling, Queen Nathan, racism, robbers, Robert D. Siegel, satire, seedy underbelly, sex fueled pop music, skits, SNL style, stereotypes, Steven Seagal, Take Me from Behind, terrorism, The Onion Movie, The Onion News Network, The Wrestler, Todd Hanson, Tom Kuntz, wiggers and posted in Movies. You can follow any responses to this entry through the RSS 2.0 feed.
« The Legend of Awesomest Maximus
Born to Fight: Dan Chupong, Tony Jaa’s Contemp. »