The Shawshank Redemption: I Finally Saw It

As most gigantic film buffs know, this movie is top dog when it comes to classic films everyone has to see. And how long did it take me to see since I’ve been really into movies? 10 years. I know you may be thinking I might as well shut down my review website, but hold your horses Seabiscuit. It wasn’t like I wasn’t going to see it and shrug it off as some dumb flick not worth my time. (Although… a bit lengthy.) This movie is across the board considered one of the best of all time, and it came out a mere 17 years ago. And there’s quite a few movies that would rival that from more than 50 or 60 years. But no, this movie, paid with a dollar to Stephen King with a single dollar bill, is now considered a masterpiece.

This movie in particular holds quite a bit of significance to me, but more to my father. So yeah, it’s pretty special. My father grew up in Mansfield, site of the Ohio State Reformatory, located just outside of downtown Mansfield. Coming from a low budget movie filmed in one location (Mansfield), I would call the

achievement of this film phenomenal. And turning the old reformatory into Shawshank State Penitentary in Maine, and thus turning Mansfield into a hotspot location for film buffs: fantastic. The streets of Mansfield, some family friends staring down the camera, yeah, this film has some history with me.

Okay, basic plot. Andy Dufresne (Tim Robbins) is convicted of killing his wife all the way back in 1947. His wife was cheating on him with a golfer (naturally Tiger Woods) and she got what was coming to her. And it’s never really clear 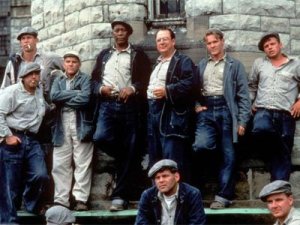 whether or not Andy committed the crime. Anyways, Dufresne is sent to Shawshank State Penitentiary in Maine, home of the writer of this short story, Stephen King. While there, Andy keeps his head down, stands up for others, and makes friends with Red (Morgan Freeman) the narrator of this fine film. Despite his status as convicted or not (all Shawshank inmates are innocent!), Andy Dufresne must stick by his beliefs and not get Shawshanked. Overused pun? Or am I the first? Let me know.

Of course, as expected with a great movie, there’s some great acting in it as

well. It is Morgan Freeman. Known simply to most as “The Voice of God”, it was roles like The Shawshank Redemption that gave him the opportunity to narrate beyond a prison story. Tim Robbins, as I’ve figured from this movie, got into highly acclaimed, Oscar worthy roles because of this movie. Although Morgan Freeman won for best actor, it doesn’t demean Tim Robbins any that he was in a movie that was up for 7 academy awards.

Who else, you may ask, deserves a nod from this acclaimed film? I would tip my hat to William Sadler as Heywood, the bumbling idiot and all around good guy, just trying to get through prison life. The only life most of them know, and that comes across in this movie with James Whitmore’s performance as Brooks Hatlen, a role that would later be ironically poked fun at by a Robot Chicken sketch. (Get busy livin’, or get Kraken.) Come to think of it, there’s always the occaisional homage or spoof that comes up about this film, and now I can enjoy them more thoroughly.

So I give the biggest nod to Frank Darabont and his screenplay from the words of Stephen King, utilizing his Dollars to Direct program of all his short stories. I do wonder though if he’s kicking himself about missing out on this cash cow. But all-in-all, I’m sure this was a wonderful film to be a part of, and I know I’ll be watching it again in the future. 9.7 out of 10.

I also wanted to throw on this little clip from Seth Green’s Robot Chicken for a little quirky spoof that got me interested in The Shawshank Redemption. Enjoy!

My loves in life are horror movies, metal, and science fiction. But that's not all I will be reviewing. I'm going to run the gambit on movies, music, books, and maybe a video game or two. Whatever I can get a hold of, I'm going to review, new and old. You can take my opinions if you want, but in the end, it's what you decide. END_OF_DOCUMENT_TOKEN_TO_BE_REPLACED
This entry was posted on Wednesday, September 7th, 2011 at 9:13 PM and tagged with 1947, 1994, 7 academy awards, Andy Dufresne, best actor, best of all time, Brooks Hatlen, bumbling idiot, cash cow, classic films, director, dollar bill, Dollars to Direct, film buffs, Frank Darabont, golfer, guilty or innocent, Heywood, homages, James Whitmore, kill wife, Kraken, lengthy, low budget film, Maine, Mansfield, masterpiece, Morgan Freeman, my father, narrator, Ohio State Reformatory, Oscar worthy, prison story, pun, Red, Robot Chicken, screenplay, Seabiscuit, Shawshank State Penitentiary, Shawshanked, short story, spoofs, Stephen King, The Shawshank Redemption, The Voice of God, Tiger Woods, Tim Robbins, William Sadler and posted in Movies. You can follow any responses to this entry through the RSS 2.0 feed.
« The Conspirator: 19th Century Courtroom Drama
Bleach: Shounen on a Giant Scale »

One response to “The Shawshank Redemption: I Finally Saw It”