So unfortunately for those of my friends who know that Dance in the Vampire Bund is awful, I still had to watch this show to determine just how bad it is. My girlfriend has only seen the nude child photos in the manga and, based on that small encounter, knows it was bad. If only I was as smart… Alas, I still watched this short 12 episode anime to see what all the fuss was about (and, as usual, Christopher Sabat, credited as C.T. Anger.)

This vampires and werewolves love dance that is

Dance in the Vampire Bund is… interesting, if I could use any word. If I could use a more accurate word… weird. Creepy. Strange… Pornographic at worst. With such a small range of plot and characters that don’t necessarily change but come full circle, it was more of a laugh then a serious perspective on the age old tale of vampires vs werewolves and their touchy-feely relationships. Oh well… 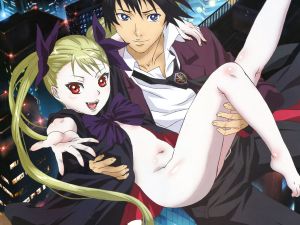 This doesn't even border wrong. It jumps over it.

In this tale of woe, Mina Tepes (Monica Rial), the “Queen” of the Vampires is planning to reveal the existence of vampires and their desire to live hand-in-hand harmony style with the humans. How does she do this? Quiz/T.V. gameshow style. And some crazy shizz goes down. And people die. And she gets naked. What could be a better way to turn people off from this show?

As the show progresses we meet 3 main villains, a few werewolves, and our main werewolf and pro/antagonist, Akira Kaburagi Regendorf (Eric Vale, credited as Alpha Legrange) who has some freaky love interest with a girl at school, Yuki Saegusa (Alexis Tipton) and Mina… So, yeah, that’s going 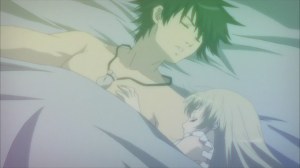 This is what's wrong. Twilight won't even touch this.

on. Waking up naked beside a 12 year old girl who is also naked? What an interesting okay view of this taboo, because she’s an old vampire who is far older than Akira…

The show ends halfway through and kicks right back up again, and I’m not sure why… Is it because there was a real push for another 6 episodes? I’m really not sure, but I think (probably based on the manga) there was a need to bring Akira’s backstory full circle.

This is pretty legit...

With a few occaisional sob scenes and way too much boobage, this show is (and should be considered) another in a long string of pop culture spinoffs that should be attached to Twilight (not that that’s a bad thing… please, don’t ask…). With a dark element like Underworld (with very similar Lycan/Werewolf transformations) and a bondage element that is way out of this world/not cool, this show goes places most anime wouldn’t. I give a small ounce of credit to the artwork and sensuality of the drawing, but that’s about as far as that goes.

Other than Eric Vale and Christopher Sabat (One the father, the other the son in this situation.) and a decently not annoying girl voice by Monica Rial, there’s not really anything to say about the voice acting, even in its caliber. I did enjoy the Ayres bro.’s and their identifiable voices as

And there's this guy.

a young quiver voiced wimp (sad though) and a centuries old Chinese vampire, Chris and Greg do it again in what seems to be a string of melodramatic C-rated anime. (Not judging, just giving my opinion. Although, its a career and I like most of their stuff. They’re cool guys in person. Especially Chris with his liters of cola and Greg with his pink hair.)

So I send a sigh your way, Dance in the Vampire Bund. With all your potential, you tell an already told story with way to much sex. And mind you, child sex. No, the transformation sequence doesn’t make it okay. And nobody really dies. Which, okay, they’re vampires, but really? Even vampires have to die someday. And so did this show. 4.5 out of 10.

Oh, and check this out.

My loves in life are horror movies, metal, and science fiction. But that's not all I will be reviewing. I'm going to run the gambit on movies, music, books, and maybe a video game or two. Whatever I can get a hold of, I'm going to review, new and old. You can take my opinions if you want, but in the end, it's what you decide. END_OF_DOCUMENT_TOKEN_TO_BE_REPLACED
This entry was posted on Wednesday, September 14th, 2011 at 3:16 AM and tagged with 12 episodes, 12 year old girl, Akira Kaburagi Regendorf, Alexis Tipton, Alpha Legrange, awful, Ayres brothers, bondage, boobage, C-rated, C.T. Anger, characters, child sex, Chinese, Chris and Greg, Christopher Sabat, cola liters, creepy, Dance in the Vampire Bund, dark element, Eric Vale, full circle, gore, love anime, Lycan, macabre anime, manga, Mina Tepes, Monical Rial, naked, nobody dies, nude child photos, nudity, pink hair, plot, pornographic, Queen of the Vampires, quiz show, sensuality, sex, sexual Twilight, small range, sob scenes, taboo, Underworld, vampires, villains, weird, werewolves, Yuki Saegusa and posted in Anime/ T.V.. You can follow any responses to this entry through the RSS 2.0 feed.
« Bleach: Shounen on a Giant Scale
30 Minutes or Less: Aziz Ansari Hour! »

5 responses to “Dance in the Vampire Bund: Sexual Twilight”