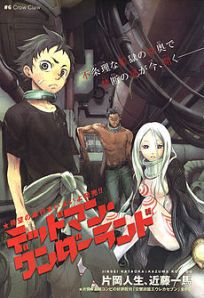 This show was ridiculous. Not exactly a fall through the rabbit hole, but this was a wonderland all its own. Ganta Igarashi is not your typical Alice and there’s no white rabbit to lead him along his way. With a endless repertoire of  metal instrumentals and scenes of excruciating death, this show comes almost as close as Metalocalypse does with its protagonists, Dethklok. In some ways it almost goes farther. Pretty scary, right?

This show is sparked all by one little middle school massacre. A mysterious Red Man (if you remember way back when in my reviews, kinda looks like Skull Man) comes bursting through the window of Ganta’s school and kills all of his classmates. And you know who gets blamed? Ganta. Put on a trial and given the death sentence, Ganta must attempt to survive the Hell on Earth that is Deadman Wonderland.

And I would venture to guess that Deadman Wonderland is worse than Hell. There are dog races in which any participating runners have to dodge death in all forms and only one can survive to win cast points. Cast points are the 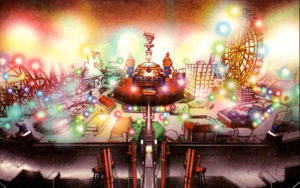 currency in which an inmate can buy and survive in Deadman Wonderland. It is especially important to gain cast points (not magically nerdy, mind you) so you can buy Candy. Candy are capsules of disgusting sweets that counteract the poison in your metallic neck leash. So despite being on death row to be executed, Ganta has to attempt to survive, every day. 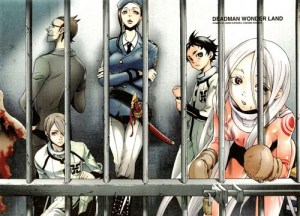 Are we all really just prisoners of life? (Joke)

Inmates, other than being subordinate to the guard staff, are given free reign to destroy each other. Ganta is constantly in fear for his life, being a scrawny middle school midget with quite a rap of offenses that would piss most guys off. And it’s not only that. The Red Man Ganta encountered bestowed some strange crystal upon his chest that allows Ganta to use what are later referred to as Branches of Sin. This use of the blood as a weapon become quite helpful with Ganta’s “body type,” but the fallback (as there always is) is that Ganta has to fight in Carnival of Corpses (pronounced by the Japanese as Cannibal Corpse. Coincidentally, songs similar to the huge body of work Cannibal Corpse has created play during these fights) which could kill him at any moment. It just looks so promising for Ganta doesn’t it? You’ll have to watch to find out.

The voices of some of the characters are fantastic. Romi Park, famous voice actor of the Japanese version of Fullmetal Alchemist, Edward Elric, is a bit whiny, but gets the job done as Ganta. Tsunenaga Tamaki is wonderfully twisted and done by Junichi Suwabe. And finally, Senji, the badass, ripped Branches of Sin fighter Crow, is admirably done by Masayuki Katou. I was overall impressed.

reminiscent of  Metalocalypse. I guess that’s why I liked it so much (look for this review in the coming months). The fluidity of the blood coursed throughout the veins of this sadistic fighting sci-fi anime in every scene. With more swearing than I’ve ever read in any subbed anime, I gotta say it was ridiculous to hear bleeps in Japanese. With other problems that probably cut this show short to 12 episodes, its unfortunate that the show was cut so abruptly short. But it ended in a way I didn’t expect either. 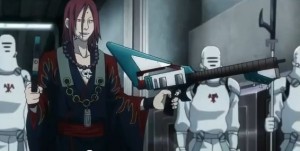 Azuma Genkaku (Toshiyuki Morikawa) was a fantastic way to end it. Tying the whole metal music themed anime together, Azuma wields an axed guitar that allows him to supersonically bend the Branches of Sin wielders to their knees. His tragic past is explored and brought to the forefront to end the show (an unfortunate end, both for the show and Azuma) although I found him to be one of the most compelling and interesting  characters in the show. With nothing certain and a future in Deadman Wonderland ahead, what will happen to little “Alice” Ganta? Check out this show, it’s definitely worth the horrific watch. A solid 9.7 out of 10. 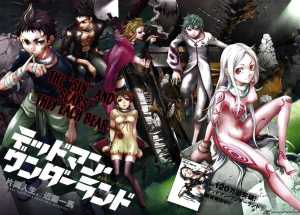 What will happen "down the rabbit hole?"

2 responses to “Deadman Wonderland: This Ain’t Your Average Alice…”