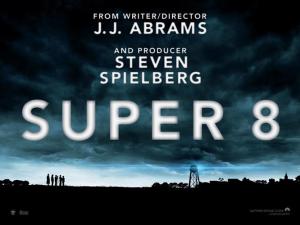 Strangely enough about the “golden child” (I’m sarcastically giving him this name.) J.J. Abrams, I’ve only seen two of his films. (Star Trek and now Super 8) And I’ve seen absolutely none of his produced work. I’m a big opponent of Lost. Any show that ends with a dream-like plot in which all the characters are dead… Wow. Nice little steal from The Sixth Sense, you jerk. But I laughed because people were let down. Back to J.J. Star Trek was great, and Abrams only other sci-fi genre film. It was full of action and great dialogue, and, coming from someone who has never watched Star Trek (movies or otherwise) it was a worthwhile watch. True fans didn’t like it, did they? Oh well…

I’m just gonna say, examining J.J. Abrams sci-fi films, I am impressed. Especially with Super 8. This film had a great children’s main cast. Joe Lamb (Joel Courtney) was a fantastic find for this film. Getting into acting through his struggling acting brother, it must suck to be his brother and lacking the opportunity Joel was given. Elle Fanning delivered as the spunky tomboy, Alice Dainard. Gaining a bit of a better reputation than her sister, Dakota, I hope that she goes far with this film. Other notables are Riley Griffiths as that fat boy director, Charles Kaznyk. If only he had stopped using the phrase “mint”, I would’ve liked him better. Ryan Lee was a great element of comic relief as Cary, the pyrotechnics expert. And, surprisingly, the most experienced out of the bunch was the least important of the characters, Zach Mills as Preston. His whiney pansy character fell into the background when the heat turned on.

And what was great about these children was the chemistry between them. Just like in The Goonies, these kids really felt like they were friends before they 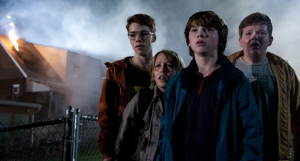 started filming. And the back and forth banter between these kids was something to behold. Some good solid character casting. This might be due more to the executive producing of Steven Spielburg, but who really knows? Also, what’s great about this film is that in takes place in Ohio. It needs to be said, being an Ohioan myself, that if you don’t know where to set a story or movie, set it in Ohio. To filmmakers, it appears to be someplace nondescript that anything can take place in. Word.

My big find for this film? Good old Simon from 7th Heaven, David Gallagher. Since then, he’s been doing a bit of work (most notably for me, Riku’s voice actor for the outrageously amazing Kingdom Hearts series) and he was in this movie. Didn’t seem him at first? Look again. David plays Donny, the burnt out, long haired druggie who helps out in the clinch for the rag tag bunch of hoodlums. And I spotted him 6 years later in this film. I’ll put that in the win column for myself.

A love interest. With a zombie film.

Should I talk about the plot of this film? Sure. In this movie, Joe Lamb (Joel Courtney) is the son of a policeman (Kyle Chandler. See? I told you I’d mention him again after that Premonition mention.) and something tragic just recently happened. In a terrible accident at her mother’s factory job, Joe finds himself in a spiral of depression and separation from his father after what happened. Blaming it on a drunken man and his daughter (Elle Fanning), a love between Joe and Alice becomes a Romeo and Juliet situation. Meanwhile, helping Charlie with his zombie film, the friends get together to film a scene one night at a train stop. In a flash, a truck mounts the tracks and head on collides with the train, sending everything into chaos. In the confusion, a specter of an alien is released, causing havoc on the small town outside of Cincinnati. With the help of some locals, this group of filmmakers must find some way to figure out what’s going on and stop the devastation as a strange group of covert army men roll in hard.

For some reason, I wish I had seen this movie in theaters. Watching in on a smaller screen makes me wish I had seen the special effects on a bigger screen. Heck, I was even impressed with the amateur film the group of kids was making. With some big, booming speakers and some darkness to watch it in, my movie watching experience would have multiplied dramatically. But I made do with what I had. I enjoyed the story and characters immensely, but found the sci-fi aspect of the story to lack a bit of originality. The alien was hard to discern and its purpose and history left something to be desired. For me, it was about the kids. With all this in mind, I would give this movie an 8.5 out of 10. 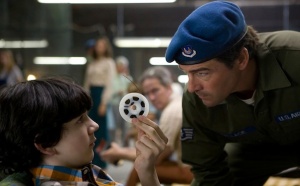 Kyle Chandler does kick some ass in this film.