Re-Cycle: The New Face of Horror 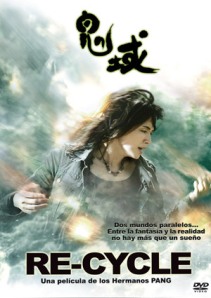 Now I gave this review “The New Face of Horror” for a reason. This movie may be 5 years old, but this movie packs a whole lot of suspense, shock, and plot into one film. With a simple plot inside of a psychological mess of meaning, this movie entertains the mind on so many levels. The Pang Brothers, directors of Bangkok Dangerous (surprisingly the original and the remake), The Eye, and The Messengers, these bros do a whole lot more with this film. I did find The Eye to be terrifying (the original, mind you) and full of disturbing images, it was coming from an honest place in the horror genre that speaks to exactly what horror is. The idea of seeing just what frightens you and not being able to stop it. And, I would like to argue, Re-Cycle does the same with its intent.

The movie starts out like any Ring-like/Grudge like plot device. Ting-Yin (Angelica Lee) is a successful author of romance novels, drawing on her own heartbreaking life experiences with her lovers. When her agent announces that the book she will be currently working on is one of a supernatural nature. Delving into a world of literature and life she is unfamiliar with, Ting-Yin finds difficulty in this topic. After her ex-lover of long ago returns from divorcing his wife, Ting-Yin finds she must reexamine just what love means to her. And then that’s when things get weird.

Ting-Yin, after writing a bit of her novel, finds that the supernatural events she is writing about… are happening to her. After scenes of suspense and danger, Ting-Yin escapes into a world not her own. She wanders through this world, encountering those who would wish her harm and others who provide help. Will she discover the meaning of this world and the characters she encounters? What exactly is the meaning of Re-Cycle? You’ll have to check out this wonderful film to discover its secrets.

What really blew me away about this movie was the Guillermo del Toro special effects. Who I consider to be the greatest creature/effects creator of all time sets the bar for me when it comes to comparison on fantasy effects. And this movie ranks highly on the del Toro scale. The hanging forest chills me, and the mask that the little girl wears is terrifying. In an almost Silent Hill (again, there’s a review on this movie on my blog), the world that Ting-Yin encounters rivals that of the decayed town in which the main character of Silent Hill finds herself in. In an almost eerily similar way, at times in the film, Ting-Yin finds herself in a section of her world that begins to decay (or recycle, as it were) underneath her feet. And there’s one section of the world that will leave you in shock.

Known as the aborted fetus room (I’ll call it that, thanks), this place of horror and its demented baby fetuses is classically considered to be a comment on the issue of pro-life. I found it to be interesting in that, in a Chinese film, a woman encounters this house of horrors in what is truly a reality for many Chinese people. Due to the regulations on population size and number of children allowed, many women would have to face this trial for themselves. But, as the Pang Brothers divulge, “That just happens to be one of the topics in the movie. We are not out to say if abortion is right or wrong.” (That was said by Oxide Pang. What a badass name.)

But this movie really rolls a lot of fantasy worlds I find endearing into one. For one, Silent Hill. The idea of a demented ghost town is always a creepy thing. Then, there’s the elements of a “Fall” type realm. In another strain, The Fall is a movie I cherish close to my heart. Tarsem Singh brings an amazingly visual movie to light with a wonderfully tragic story. Not that this movie had that, but it came so damn close I cried regardless at the end. And, as always, my personal favorite, Alice in Wonderland. As if Ting-Yin herself was the Alice down the rabbit hole, this author turned experiencer of her own mind effectively symbolizes Alice and Lewis Carroll all at once.

I actually liked this cover better.

There were only a few drawbacks to this film. The biggest one I would say is the love interest. Well, former love interest. The few parts he had were entirely dubbed over by another Chinese actor. This jarring experience really ruined one of the more emotional scenes that was meant to show you the anguish between Ting-Yin and her lover. The other was the few slightly below average demons in the world in which Ting-Yin traversed. If only a bit of special effects work had been done instead of makeup, it may have looked a bit more demonic and devious. But, all-in-all, this movie delivered on all levels. With a move from the suspenseful and shocking to the macabre and surreal, this movie ends with an emotional bang, in a good way. So definitely check this out. If I had seen this movie earlier, I would’ve given this one of the more enjoyable and engrossing movie watching experiences of 2006. 9.8 out of 10.

My loves in life are horror movies, metal, and science fiction. But that's not all I will be reviewing. I'm going to run the gambit on movies, music, books, and maybe a video game or two. Whatever I can get a hold of, I'm going to review, new and old. You can take my opinions if you want, but in the end, it's what you decide. END_OF_DOCUMENT_TOKEN_TO_BE_REPLACED
This entry was posted on Saturday, January 14th, 2012 at 12:57 AM and tagged with aborted fetus cave/room, Alice, Alice in Wonderland, Angelica Lee, author, baby fetuses, Bangkok Dangerous, best movie watching experience of 2006, Chinese dubbed over, Chinese horror film, decayed town, demons, disturbing images, drawbacks, emotional scene ruined, ends with a bang, escapes into another world, ex-lover, fantasy effects, fantasy worlds, ghost town, good original plot, greatest creature effects, Guillermo del Toro special effects, hanging forest, honest filming, levels of entertainment, Lewis Carroll, like The Grudge, like The Ring, makeup effects poor, movie of discovery, new face of horror, Oxide Pang, Pang Brothers, pro-life, psychological mess of meaning, rabbit hole, Re-cycle, regulations on population size, romance novels, shock, Silent Hill, supernatural, surreal, suspense, Tarsem Singh, terrifying horror film, The Eye, The Fall, The Messengers, Ting-Yin, Toro scale, tragic story and posted in Movies. You can follow any responses to this entry through the RSS 2.0 feed.
« Samurai 7. Destructive.
The Adventures of Tintin: The Best »

7 responses to “Re-Cycle: The New Face of Horror”