Unknown: The Unrelated Sequel to Taken

As with Taken, Liam Neeson leaves his comfort zone yet again as an action star. This classic Irish actor assumes the role of an American with a sophisticated upper class NorthEastern accent to kick some more ass. I don’t know how this all happened, but out of nowhere, Liam Neeson became a huge action star at the ripe old age of 56. It may have started in 2005 with Batma Begins, who knows. But the world (Hollywood) decided it was time for a 50+ year old man to be the star of oh so many action films. In his latest to be released, Liam Neeson plays Dr. Martin Harris, a biochemical engineer on a getaway convention in Berlin, Germany.

With The Grey to be released soon, I had to see Unknown before I could begin to handle Neeson bottle knifing wolves in the forest wilderness of Alaska. (I think that’s where it is…) By the suggestion of my mother (weird it isn’t just my own volition, huh?) I sat down with some Taco Bell and delved into something I wasn’t entirely ready for.

Aww, what a quaint father and daughter... I mean couple...

Dr. Martin Harris is a well to do scientist in Germany on business. He has decided to take his wife Elizabeth (January Jones) on this wonderful little convention at a well to do hotel in Berlin. (My mother suggested this movie to me because I speak German decently and enjoyed Germany.) Upon arrival, Martin Harris (he will frequently and forcefully refer to himself as such throughout the film) forgets his briefcase at the airport. Catching a cab back to retrieve it, Harris is involved in an unfortunate accident that takes him off a bridge (homage to Bourne Supremacy insert here) and loses his memory (continue Bourne reference).

WHO AM I? My age has restricted my memory...

Upon waking up in the hospital, Harris can’t seem to explain to the doctor just who he is or what he’s doing there. With a bit of probing, it all starts to come back to him. He is Dr. Martin Harris and he must get back to the hotel for the conference he’s been unconscious three days for. So he books it to the hotel with a stern message from the doctor and finds his wife. But his wife doesn’t recognize him. And there’s a man there, claiming to be Dr. Martin Harris (Aidan Quinn).

In his polite and assuredly forceful rage, Liam Neeson begins a Alzheimer’s induced rampage all over Berlin. He runs into the fraud of himself multiple times and argues semantics with his past that this man can spew back at the same exact time. This is where it gets weird. You think there’s a sci-fi/fantasy twist, but hold your breath, it’s something not as strange. But it does seem like The 6th Day right? Someone in my house eating my birthday cake with my child, right? It’s uncanny. And yet, it almost seems to actually be the delusion of some old man running into another old man and rambling like old men. 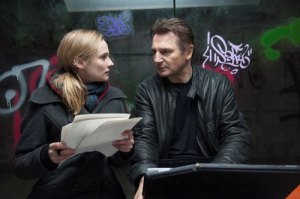 The movie has some good action scenes, but with the unfortunate comparison to Taken, it’s just not as good. Liam Neeson elegantly and kindly stumbles around Berlin attempting to find out just why he’s so crazy. His logical mind kicks into full gear and recruits an ex-Nazi intelligence man, Ernst Jurgen (Bruno Ganz). This guy seems like a hardass and, with the way Liam Neeson’s career is going into action films, I wouldn’t have been surprised if Ernst karate chopped a few necks of his own. Harris (Neeson, they’re interchangeable) recruits the help of a renegade Turkish woman who was driving his taxi Gina (Diane Kruger) and strangely falls in love with her. It’s all just bizarre. 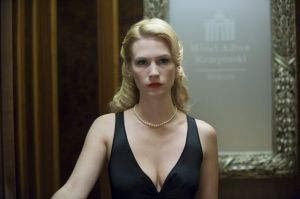 Get out of here J.J., you're terrible.

This movie, like Taken, takes cues from the Bourne series amongst other things. Car chases and explosions, intense fight scenes with a lady present, it’s got it all. What is doesn’t have is an element of romantic chemistry I felt it was going for. Liam Neeson is attempting to fight for and win back a wife who is 26 years younger than him. Sure, love comes in all shapes and sizes, but you feel absolutely none of that chemistry on screen. He remembers sleeping with her. A bit creepy. Imagining Qui Gon Jinn hooking up with Padme Amidala is a bit more realistic. When this movie started, I thought it was Taken 2, and Neeson was accompanying his daughter January Jones (funny, she’s born Jan. 5th…) to Berlin for a proper European vacation. I was sorely mistaken. And disappointed.

It’s unfortunate I have to compare this to Taken. Based on the novel Out of My Head by Dider Van Cauwelaert, I found the premise and plot to be quite well paced and interesting. The casting is just too piss poor. With this new stigma of placing Liam Neeson in the wrong roles, there is a translation error. An unfortunate one that must be corrected. We should’ve stopped at Taken. A paltry 5.1 out of 10.

Oh, and January Jones is a terrible actress. Frank Langella was good though for his small part. 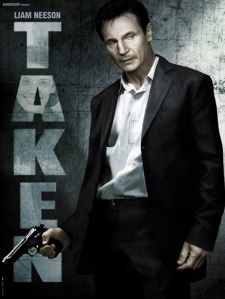 Time to get you chop on. Maybe in The Grey...

One response to “Unknown: The Unrelated Sequel to Taken”