From the producers and directors of The Hangover and Wedding Crashers, I expected something a bit different from this movie. I expected the ridiculous situations and grossout comedy duo that has been spewing out of Hollywood since Judd Apatow took up The 40 Year Old Virgin. Something a bit different was sent my way. An outrageous comedy… with a sentimental side. As shocking as that may sound, this 2 hour film had the time to flesh out a relationship to the characters and the concern for the well being of their lives. And coming from a pair of true gold comedy actors (that have the capacity for more than comedy), this movie does deliver well. More so on plot and acting than lines and delivery.

So Dave Lockwood (Jason Bateman) is a married man. He married young and

has a beautiful young daughter and a strange pair of infant twins. Meanwhile, Dave’s friend Mitch Planko (Ryan Reynolds) is a single man, banging all he sees and loving living in his own filth and depravity. Although the two remain friends, they have grown apart somewhat since their lifestyles have taken them away from each other. Dave is a successful lawyer at a major corporation and Mitch is a semi-successful actor. The two’s lives aren’t close to perfect, but they enjoy their situations. 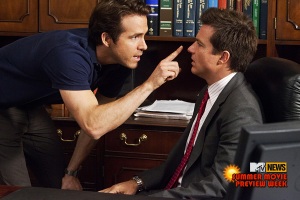 Dave and Mitch get together, breaking their routines to catch up on old times and catch a baseball game at a local bar. While there, the two get a little more wasted than ususal. Things are talked about and emotions run high. And then, BAM. Freaky Friday hits like a storm as the two piss into a fountain. By the plot Gods, this seems all too familiar. And yet, it’s the male perspective on the idea of taking a walk in another’s shoes. Word, I can dig that. With the fountain moved (classic Big situation), the two have to live each other’s lives for a while, and re-discover themselves through each other’s eyes. 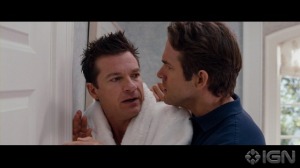 They play each other. To a tee.

played Ryan Reynolds and how well Ryan Reynolds played Jason Bateman. It’s more the generational issue in Freaky Friday, but in this one it’s more of a body swap of men of the same age. Different habits and personalities are mirrored in this comedy down to, what I would say, is a tee. The anal-retentiveness of Bateman pairs off with the ridiculously callous antics of Reynolds. Having to talk to yourself as the other person was pretty key in this movie, and it was pulled off with a-bomb. (Niceeee.)

In classic fashion, this movie starts off with some poop jokes and some strange combinations of swear words. (F-knuckles? Are you kidding me?) I’ve started to dislike the invention of swear-catch-phrases as I’ll call them, and this needs to be remedied with some great pop culture references and such, a-la Workaholics (can’t wait to rave about that shizz). The movie moves along with some classic situations and works along with quite a few nudie shots for the guy audience. I watched the unrated version. And yet, I was surprised that, despite not being directed by Judd Apatow, his wife, Leslie Mann, played a part in this movie anddd showed off the goods. It was as strange as it was comical.

And then you get hit with the friend moving along in life montage, followed by, BAM. 45 minutes of touching connection. Did you see this coming? Nope. Could you imagine Ryan Reynolds in Jason Bateman’s body pulling off

This movie will get touching.

pretending to be a lawyer by watching Law & Order? Not at all. But this all happens. And, in the realm of strange, quirky fantasy, it works. For the first time ever, I connected with Leslie Mann as a decent actress. Coming from a woman who always plays the comical stuck up bitch, this was refeshing. Some “true” tears were shed and the perfect balance of drama and comedy was achieved. From a movie made by The Hangover and Wedding Crasher guys. Weird… 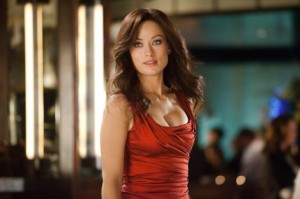 Sorry guys, just for the eye candy. Don't know about that substance...

I gotta say, if this is in the original version and not the edited, there are some great comedy scenes in this movie. Watch out for the twins, that’s a great bit. And Ryan Reynolds’ acting career as it were? That’s what I’m talking about. Every time he pops up, whether it be Cinderella Man or Scary Movie 4, Craig Bierko delivers. This time as a Russian porn star director. What’s good. There are some great lines from Jason Bateman (while being possessed by Ryan Reynolds) and quite a few attractive women in this movie. Not a big fan of Olivia Wilde’s acting though… she’s just an eye candy actress… (Sorry if that offends…)

So, if you’re into dramatic movies, this one will surprise you. If you’re into comedies of the outlandish sort, this movie will please and appease you. With such a satisfying mix with only a few big name actors putting their names on the bill, this really delivers. And yes, this is the Year of the Bateman. Jason Bateman. Solid 8.6 out of 10.

Can you handle the Bateman?

One response to “The Change-Up: Surprisingly Heartwarming”