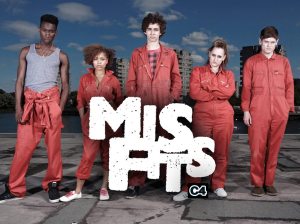 My loves in life are horror movies, metal, and science fiction. But that's not all I will be reviewing. I'm going to run the gambit on movies, music, books, and maybe a video game or two. Whatever I can get a hold of, I'm going to review, new and old. You can take my opinions if you want, but in the end, it's what you decide. END_OF_DOCUMENT_TOKEN_TO_BE_REPLACED
This entry was posted on Sunday, April 29th, 2012 at 8:33 PM and tagged with 10 out of 10, 11 out of 10, Alisha, ASBO 5, best power of all, bigger and better, blow your mind, care for characters, cheese, classic, community service, Curtis, ends gracefully, everything connects, exudes sex, fighting attitude, fourth planned, gets better, good back story, good entertainment value, hear people's thoughts, Hulu, immortality, insecurity, invisibility, journey of discovery, Kelly, lack of social skills, length and breadth, life and death, masked hero, Misfits, Misfits: Series 2, mystery, Nathan, Nathan leaves, new twists, offensive quips, parkour, self image, series two, sex appeal, sexy and sassy, Simon, smart mouth, sticks and stones, superpowers, surprises, third series, tragic, turn back time, video game violence, worth the watch and posted in Anime/ T.V.. You can follow any responses to this entry through the RSS 2.0 feed.
« Trollhunter
Johnny English: Reborn »