The Ten: Thou Shalt Laugh 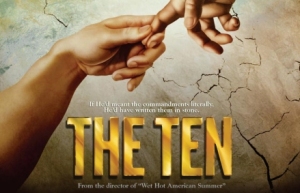 David Wain surprises me again and again with his hilarious body of work. And not his actual body, mind you, because it is funny that his balding haircut is as comic as his movies. But The Ten is a comedic movie taking a different angle on the Ten Commandments. With ten short sketches about just what do those commandments mean leaves you understanding just what a modern view of those rules are.

Paul Rudd is the host of this little soiree, sticking his head in and out as he lives beneath the two behemoth tablets. Married to Famke Janssen, Paul struggles with the commandments himself and finds love in Jessica Alba, as his life is turned upside down. Now, I love Paul Rudd. Being the straight man comes off as strange for him sometimes, but 50/50 it works in his comedies. I just love that he has worked so closely with David Wain over the years (Role Models, Wet Hot American Summer, this…) that he has been able to 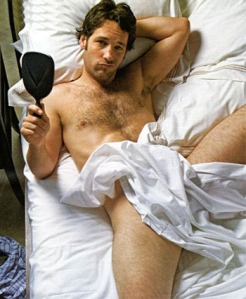 Paul Rudd, you genius, you.

cultivate comedic characters that are both funny and underhandedly serious at the same time. That’s a balance that’s hard to walk, but Rudd finds a way. He is one of my favorite comedic actors of all time. Thank God (pardon the pun) for The 40 Year Old Virgin. 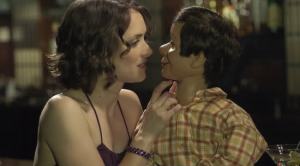 Now some of these stories are hit and miss. Winona Ryder’s scenes with Adam Brody and the ventriloquist dummy are some of the best. It’s nice to see that characters came back in this series. The commandment story with Liev Schreiber in competition with Joe Lo Truglio over MRI machines was hilarious. But not all of them are that good. The goof story and the subsequent ass rape story were a little off base, but I can see where David Wain was coming from. To take a serious situation and make it into something darkly funny is usually key, but it all comes with the territory that you might fudge it up. But it all wraps together nicely with a song and dance with some nude men and Roberta Flack. It was truly killing me softly. 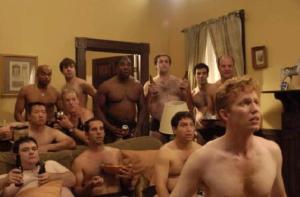 That’s a lot of nude men who like Roberta Flack.

I would say as far as concept, this movie is an interesting one. It hits the points I find interesting. Modern day religion, characters tied into each other’s stories, and a comedic element of seriousness that pushes the story along. It’s not as good as some of David Wain’s other work, but it wasn’t a bad attempt either. It’s worth watching, but if you are offended by animated orgies or sex with dolls, then maybe you should look elsewhere for your comedy. I got a laugh out of it, and you might too. A decent film, The Ten deserves a 6.5 out of TEN.

My loves in life are horror movies, metal, and science fiction. But that's not all I will be reviewing. I'm going to run the gambit on movies, music, books, and maybe a video game or two. Whatever I can get a hold of, I'm going to review, new and old. You can take my opinions if you want, but in the end, it's what you decide. END_OF_DOCUMENT_TOKEN_TO_BE_REPLACED
This entry was posted on Friday, June 8th, 2012 at 12:30 PM and tagged with Adam Brody, animated orgy, ass rape, body of work, comedic characters, comedies, competition, darkly funny, David Wain, decent film, different angle, Famke Janssen, favorite funny actor, find love, goof, hit and miss, interesting concept, Jessica Alba, Joe Lo Truglio, Killing Me Softly, Liev Schreiber, marriage, modern day religion, modern view, MRI machines, not a bad attempt, nude men, off base, Paul Rudd, reoccurring characters, Roberta Flack, Role Models, rules, serious situations, sex with dolls, short sketches, song and dance, straight man, Ten Commandments, The 40 Year Old Virgin, The Ten, thou shalt laugh, two tablets, underhandedly serious, ventriloquist dummy, Wet Hot American Summer, Winona Ryder, worth watching and posted in Movies. You can follow any responses to this entry through the RSS 2.0 feed.
« Iron Monkey: Martial Arts in Flight
A Film With Me In It »