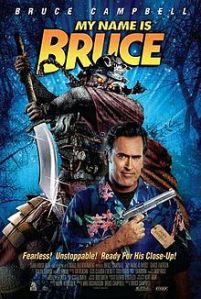 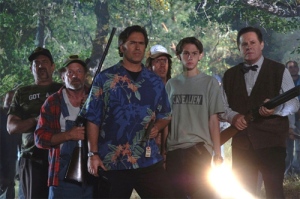 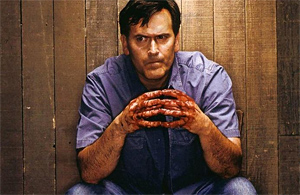 My loves in life are horror movies, metal, and science fiction. But that's not all I will be reviewing. I'm going to run the gambit on movies, music, books, and maybe a video game or two. Whatever I can get a hold of, I'm going to review, new and old. You can take my opinions if you want, but in the end, it's what you decide. END_OF_DOCUMENT_TOKEN_TO_BE_REPLACED
This entry was posted on Tuesday, June 26th, 2012 at 5:45 PM and tagged with all Hell breaks loose, all in fun, arrogant figure, B-rated actor, bean curd, big fan, big head, birthday surprise, Bruce Campbell, Bubba Ho-tep, campy genre, character appearances, cheesiness, cheesy, childhood hero, Chinese, comical, demon, drunken dog, Evil Dead trilogy, fans, fantasy, favorite directors, Give me some sugar baby, Gold Lick, good with the ladies, goofy comic lines, goth girls, Grace Thorsen, Guan-Di, Hail to the king, heyday of Bruce Campbell, Jeff, joking film, Kelly Graham, kidnapping, lovable goofball, mineshaft, My Name is Bruce, ode to Bruce Campbell, personal hero, podunk town, railroads, rated R, reminiscient, Sam Raimi, save the day, sci-fi, slapstick comedy, some swearing, Spider-Man trilogy, stardom, Taylor Sharpe, Ted Raimi, teens, Toddner Mills, trailer, unloved and alone and posted in Movies. You can follow any responses to this entry through the RSS 2.0 feed.
« Insidious: The Downward Slope
Ping Pong Playa »