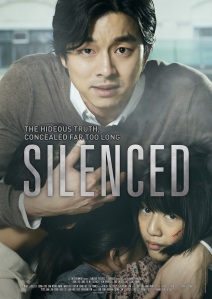 So, stereotypically, when it comes to Korean films, I watch horror and thrillers. It’s not often I stray from that path and end up watching something unique and beautiful like I did with this. Based on a true story, Silenced is a film about the injustice and legal accusations of a school of deaf children against their abusive and molesting faculty. This movie hits you hard with its brutality and tugs at your heartstrings with the emotions the child actors show in their voiceless anguish. Not what I was expecting, and so wonderfully done I don’t want to forget it. This movie could very well impact your life.

The basic premise of this film. Kang In-Ho (Gong Yoo) is a mild mannered teacher of

The utter grace of sign language, in all languages.

the deaf who comes to a new school. Working for his daughter with severe asthma and his mother (his wife has passed on), Kang In-Ho is forced to pay 50 million Won (50,000 in American dough) in order to work at the school, “without complications”. After noticing some strange activities, including the beating of a young male student, Kang In-Ho must do something.

And do something he shall. Enlisting the help of a civil rights worker named Yoo-Jin (Jung Yu-Mi), the duo brings to court the cases of three students, all tragically tainted by their experiences at school, and without the power to voice their cries. The added element of sign language in this film creates more of an impact when silent tears roll down the children’s faces.

The acting in this film was phenomenal (as might be expected from the film festival reviews) and the dark atmosphere was superbly coupled with the cinematography. The subject matter is heavy and troubling, but you really get a chance to connect to the characters in the film and care about their well being. Hats off to any child actor who can deal with a role like this in a professional context. It has been a while since I’ve seen this, but I always enjoy a courtroom drama, and this one delivered on so many levels. The outcome is surprising as well.

What really sums up this movie is the message at the end. This being about real events, this movie was out to make people aware of the atrocities mankind commits on mankind. The troubling scenes and the feelings of hatred and injustice that spill throughout this movie make it for an emotional watch, but it is well worth it if you care about the issues at hand in this film. (It helps if you like Asian films as well.) Don’t know much else to say about this, other than to watch it ASAP. I’ll give Silenced more than a whisper on my rating scale: 8.4 out of 10.

My loves in life are horror movies, metal, and science fiction. But that's not all I will be reviewing. I'm going to run the gambit on movies, music, books, and maybe a video game or two. Whatever I can get a hold of, I'm going to review, new and old. You can take my opinions if you want, but in the end, it's what you decide. END_OF_DOCUMENT_TOKEN_TO_BE_REPLACED
This entry was posted on Tuesday, November 6th, 2012 at 9:38 AM and tagged with abusive, anguish, Asian films, atrocity, based on a true story, brutality, child actors, cinematography, civil rights workers, connect to the characters, courtroom drama, dark atmosphere, deaf children, emotional, film festival, Gong Yoo, hatred and injustice, heavy subject matter, hits hard, horror, injustice, Jung Yu-Mi, Kang In-Ho, Korean, Korean films, legal system, molesting, phenomenal acting, real events, school, severe asthma, sign language, Silenced, surprising outcome, teacher, thrillers, tragic, troubling scenes, unique and beautiful, Won, Yoo-Jin and posted in Movies. You can follow any responses to this entry through the RSS 2.0 feed.
« The Raid: Redemption. Action, Done Right.
The Expendables 2: Redonkulousness. »