Never Let Me Go (The Film) 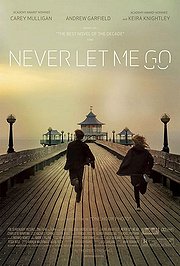 I have to admit, this movie completely missed my radar. And its only come up because of an independent study class on dystopias that I’ve learned about movies like this. And let me tell you, this one’s a doozy. A love story and depressing dystopia all rolled into one characterizes Kazuo Ishiguro’s Never Let Me Go.

Let me try to paint a picture for you of the world created in this movie. Kathy (Carey Mulligan), Ruth (Keira Knightley), and Tommy (Andrew Garfield) are three young 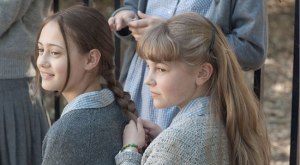 individuals who live a sheltered life in an alternate reality. It’s the 60’s and all major illnesses have been cured. The last great obstacle is death. And with organs failing, a solution is needed to push people far past their early 100’s.

Shaggy and bohemian is the way to look in the 70’s I guess.

on the children. They’re not allowed to leave the grounds, not allowed to break the rules, and must always remain healthy. This may seem odd, and the big reveal doesn’t come until maybe 30 or 40 minutes into the film. It may shock you a bit.

What really impressed me about this movie was the cinematography. It was dreary, and at the same time surreal in the way it looked. And coming from Mark Romanek, a usual music video director, this was quite surprising for a slightly different presentation medium. The music was done hauntingly well on the trilling piano, with a British background landscape that made everything seem desolate, from school to farm, farm to beach.

I don’t want to reveal too much about the plot, but I do have to say I thoroughly enjoyed the naivete of all the characters in the film. The child actors were very mature and experienced for

as few productions as they’ve done, coupled with great performances by Mulligan, Garfield, and Knightley. You do have to understand that all of these characters are socially isolated and it reflects well in the acting they all deliver. (More Garfield than anyone else.) His painful cries and Knightley’s haunted witchiness makes for a great combo in comparison to Mulligan’s calm and collected motherly figure.

I’ll leave the rest of the film up to you to see for yourselves, but it is worth a watch because of how well Kazuo Ishiguro’s books translate into films (i.e.  The Remains of the Day). I wasn’t wholeheartedly into it, but it wasn’t disappointing either. It was simply a movie about love and loss, between innocent characters. A love triangle for the dystopian ages. Worth checking out. 6.8 out of 10.

My loves in life are horror movies, metal, and science fiction. But that's not all I will be reviewing. I'm going to run the gambit on movies, music, books, and maybe a video game or two. Whatever I can get a hold of, I'm going to review, new and old. You can take my opinions if you want, but in the end, it's what you decide. END_OF_DOCUMENT_TOKEN_TO_BE_REPLACED
This entry was posted on Thursday, November 8th, 2012 at 3:46 PM and tagged with 1960's, alternate reality, Andrew Garfield, big reveal, boarding school, British background, Charlie Rowe, Charlotte Rampling, child actors, children, death, depressing, dreary, dystopia, Ella Purnell, good cinematography, haunting music, health, innocent characters, Isobel Miekle-Small, Kathy Carey Mulligan, Kazuo Ishiguro, Keira Knightley, love and loss, love story, love triangle, Madame, Mark Romanek, Miss Emily, music video director, naive characters, Nathalie Richard, Never Let Me Go film, odd, organs, piano, Ruth, sheltered life, simple film, socially isolated, surreal, The Remains of the Day, Tommy and posted in Movies. You can follow any responses to this entry through the RSS 2.0 feed.
« Wreck-It Ralph: A Gamer’s Paradise
The Great Dictator: A Nazi Slap to Hitler »

One response to “Never Let Me Go (The Film)”