Reincarnation (Frightened by a Doll)

So I watched this Asian Horror Movie gem late last night. And I mean late. Talkin’ 3 AM here. Not a good decision at all. From the D rating I would’ve given the DVD previews for movies from Lion’s Gate and After Dark Films, this looked headed straight for the “piss-poor” category. Wow, was I wrong.

Reincarnation, as it’s simple titled, is exactly what is says. This movie deals with reincarnation. Hardcore reincarnation. Like, if you were killed it a previous life and found out you were killed in a previous life, best bet’s that you’re gonna die in the next 90 minutes. The story revolves around the brutal murder-suicide of eleven people, 3 of a family and 8 hotel employees by a professor. Interesting they point out more it’s a professor than just a dad… But it’s not about the original killings. It’s about the movie that reenacts the brutal killings of 35 years ago. And these killings start happening again.

People in this movie die quite quickly. Usually a knife to the chest, low budget, insignificant death. And it’s not the people that you think. You know, the box synopsis suggest those who play the roles of the victims dies. But it’s more than that. Remember. Reincarnation. And as people die, which it seems like nobody notices, the main actor who portrays the young girl victim, Nagisa, is discovering more than she’d like by way of realistic flashbacks. And that’s not even the best part. You have to watch for the best part.

The best part of this movie is the scary-ass doll that is in literally half the movie. You think, “It’s alive. Clearly, it’s alive.” (You may be right.) But the way in which this thing goes down, will not let you sleep soundly, if at all. That thing takes the whole movie to the next level for me. I wasn’t scared at first, but Asians, master horror movie makers that they are were like, “Hmm, how can I make Ross poop his pants all the way over in America?” Here. Perfect. Evil doll. (This fear sparks from seeing Chucky wayyy too early in my life and being subjected to a Howdy Doody doll in my grandmother’s basement. That thing moves. Also, I don’t like midgets. They are living dolls.)

One of the best things about this movie is the way it comments on the horror movie industry. With movies like The Amityville Horror and The Exorcism of Emily Rose, does recreating a murder or otherworldly experience really bring about real experiences for the movie makers? The taboo of “Don’t dirty a dead man’s name” (Just made that up.) in a movie or go dancing on graves (Gravedancers, another quality Lion’s Gate feature.) really going to incur the wrath of those who are dead? Food for thought. And I thought this movie, based on scary effects and overall appeal of the acting and directing, deserves a solid 6 out of 10. 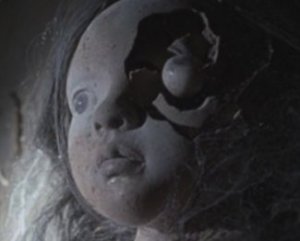