Tag Archives: Apostles of the Star 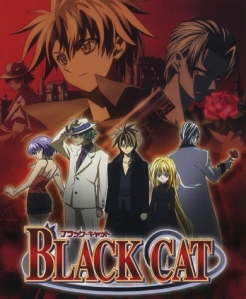 For starters, I really liked the way this anime started off. It’s been a while since I watched it (only a few weeks, don’t worry, it’s still hella fresh), but the first episode really stuck out to me. I love the way certain anime start off with no clues as to what’s going on and let’s you figure out at what poin that initial scene will come back into relevancy. This show did a great job with that. Bringing in a climatic scene to show off the fighting and style of the anime was a great diving off point. And then, as is shown, we are given a build up in the show.

So the basic plot, I guess, is that Train Heartnet (Jason Liebrecht) AKA, Black Cat is one of the all-stars among the Chronos numbers. This elite groups of fighters wields specific powerful weapons to each of their characters that help rid the world of evil and injustice. With this power came a bit of bigheadedness and there are those among the Chronos numbers who felt it may be time for a

Train and his "woman". It's unfortunate what happens.

bit of a power struggle/coup. Black Cat wasn’t particularly one of them, but his “friend” Creed Diskenth (Chris Patton) saw to it that it was. (Cue classic “I kill your woman so come at me brah” scene.) So, in fact, Train spends a lot of this 24 episode anime chasing down bounties and trying to get at Creed for his injustices, just not with the Chrono numbers.

And why, you may ask, does Train leave the Chronos numbers? Well, Creed did in fact kill his woman and he also shed some light on the overlord situation being created by Chronos. Being able to decide who he shoots with 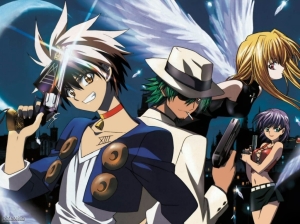 his trusty Hades pistol gave Train the intiative to leave Chronos and embark on this adventure of revenge and redemption. This creates problems for the do-gooders of Chronos and their soon to be enemy, the Apostles of the Star. But this is all much later, and it would be better not to divulge and deal witht eh story at its beginnings.

This story, once Train leaves Chronos, deals with the bounty hunters all over this (Japanese?) continent. Set in a slightly different world where a bit more of the magical is possible, issues of transformation and impossible science and powers are given free reign. Not that there’s anything wrong with that, but its initially not portrayed as anything supernatural at the beginning (a bit misleading). But I grew to love it in a heartbeat. Come on, a dead-eye shot with a pistol who can save the world and the girl? I’m putty in your hands to mold to this plot. 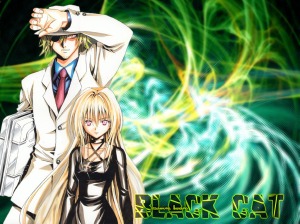 My favorite character in this anime is Sven Vollfied, voiced by the very able Brandon Potter. Now, you won’t hear this guy’s voice come up this often, but its so gravelly and unique with its tone and inflections and the occaisional squeak in his voice that you’ll laugh and connect all at the same time. But anyways, Sven is a great protective Dad character that looks out for Train, Eve (Brina Palencia) and Rinslet Walker (Jamie Marchi). Throughout the show, Sven sacrifices himself against great odds constantly in order to ensure that the other characters know there’s someone there that cares and loves for them deeply.

With little vinettes into the lives of some of the bounties these four “hunters” chase and two epic battle culminations towards the end, you really get a sense of what these people are individually and collectively fighting for. You find your favorite and root for them, despite the odds of the foes. It makes for a great quick watch (depending on how much time you wanna spend watching little sections of different plots at a time) and has a comically interesting 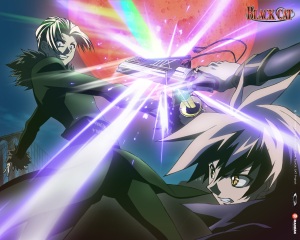 A great beginning and a great ending.

animation style depsite the heavy issues that are dealth with at times. Not quite a shounen fighter, not quite a comedy, this show find a happy dramadey medium that works just fine. This middle of the road anime deserves at least a 7.2 out of 10.