Unrest in peace my ass...

Selected as one of the “8 Films to Die for” in 2006, The Gravedancers attempts to legitimize itself by considering whatever made it scary in its straight to DVD release as a big deal. What was most frightening about this movie was Marcus Thomas’s acting. Playing Sid Vance, this man’s career should’ve been torched just like his unfortunate ass did in this movie. After witnessing a garishly hilarious trailer on a DVD of other Afterdark horror movies, I just had to get my hands on this one. My friends and I are always up for a good laugh, and I wanted to see if this movie found itself to be a contender.

Let me explain the plot of this movie and what happens as exactly why this movie made me use the phrase “Oh boy, Sid…”

So the movie starts in, hard and fast with this woman getting 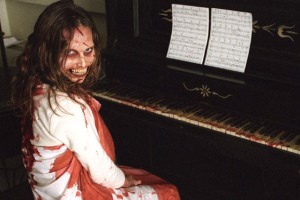 We got a little Alicia Keys here..

raped or something. Nobody is there, its starting to look like Final Destination already. I love it in movies when the forces of gravity work against you for no reason! This young tramp gets hanged and her suicide letter, gothically wrapped, drops out of her hand.

Fast forward to a few years afterwards. There are these three friends, Harris (Dominic Purcell), Kira (Josie Maran), and Sid (Marcus Thomas). Their other friend… can’t remember his name, died. Don’t explain why, my best guess? Drunk driving, slammed a pole. I mean, in the next scene,

all you get from this group of friends is that all three of them drink excessively and go out hard doing strange things. Kira and Harris get frisky and Dominic Purcell is too much of a baller from Prison Break to care. I lost respect for this English actor today, never having really seen him in anything.

So they all get frisky and decide to go break into the cemetery where their friend is buried. First problem. This is a friend group with one girl and three guys. A bit strange even in college, and I would’ve loved to see how they

incorporated a skank of Kira’s magnitude into the Bro-Circle. I guess it was fitting that some deranged old Father McCready rapist/killer was the grave she danced on… Second problem. They all go dance on graves and decide it would be best to recite an incantation in a black envelope. And whose supreme fault is all this? Sid’s. It will always and forever be Sid’s dumbass fault that anything would ever happen to this group of players. 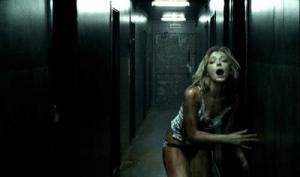 Your part is unimportant.

Then strange things start happening. And it even affects Harris’s wife, Allison (Clare Kramer). Why, you may ask? Who knows, but she for sure didn’t dance some old mamba over any stiffs. But the cat gets freaked and some old decrepit woman is sleeping up in her bed, making all sorts of moaning noises, trying to make everything look bad for old Harris. And she gets the worst of it. Jesus, that’s messed up. Then Kira gets schank destroyed and bitten?!?! Oh well, she got the worst out of all of them.

Sid’s little meister of destruction lights real fires in his room (not spectral fires Vincent, whatever the Hell that means…) and nobody can seem to figure out

what actions could have caused this. At least Sid had the good sense to hire some paranormal investigators. Vincent (Tcheky Karyo) and Culpepper (Megahn Perry) as I like to call her. Or, respectively, the man with the military grade Humvee that he uses for pleasure and Velma from Scooby Doo. These two straight Inspector Gadgets play the haunting by the rules and figure out that the graves they danced on, belonged to felons.

This can't be considered scary, can it? Who dies and looks like that?

BIG PROBLEM RIGHT THERE. When has anyone (and I’m sure this may be true) ever heard of a section of a cemetary devoted to undesirables? In a surburban area where it doesn’t seem to have any history? They just line up three unrelated individual dead parole walkers right next to each other without even considering putting them next to their families? At least the young boy for God sakes…

So, as everyone knows, you gotta go dig up the body of the person who is haunting you and bury that shit in a shallow grave. Every piece mind you. So they go do that, they all get choked out by their stalkers and they resort to plan C. Let’s all hole up in Vincent’s great big mansion that looks straight out of The House on Haunted Hill and hope we’ll survive until the morning. Because everyone knows that ghosts ebb and flow with the tides and their powers. And that every villainous ghost wears a big old mask with a big old plastic grin on it. Axe murderer, rapist, and a kid who bursts into flame. Let those games begin.

Some crazy shit happens and the military humvee saves the day. Smashing walls, setting Sid on fire, it’s all that I’ve ever wanted in a movie. Throw me some more of those jealous cat fights and overdramatic acting. Deliver some more bad lines Sid, I dare you. But it doesn’t change the fact that movies like this are enjoyable. It had a few jumpy moments and some “Oh no they didn’t…” moments. And, if only if only it considered itself a horror comedy, I would’ve truly understood. Anddd… screw that strange old cemetery foreman at the end. His point is pointless. As was most of this movie. Here you go Gravedancers. 3.8 out of 10. If only for the comedy…

Deal with this right here.