The Human Centipede: First Sequence. Can’t wait for the second…

Wow. This movie blew me away. With its intense gore scenes and heavily emotional acting, coherent, flowing plot line and twisted characters, nothing could be better from IFC. Tom Six has created a movie everyone can enjoy, young and old alike. This movie deserves any award it can win…

Alright, can’t lie anymore. This movie was poop in the pants. A complete shit (pun completely intended). I thought, hey, I’ll watch this. I love horror movies and I would like to think I know quite a bit about them. I was not prepared for this.

At all. If there is anyone who watched this and considered it a decent horror movie, you don’t really know much about horror movies, do you? (Not trying to insult, trying to inform you of your mistaken choices in life as a whole.)

Now I know Daniel Tosh did a decent trashing/good summary of this movie (quite accurate), but I need to sum it up in my own words. Okay, two women, Lindsay (Ashley C. Williams) and Jenny (Ashlynn Yennie, wtf?) are two classically slutty girls on a German sex trip? (There is no real explanation/reason for these to American women to be in Germany.) But these two are just about to slut it up! But, oh no, these two interchangeable girls (could be twins, I can’t/don’t care to tell them apart) are riding through the damn woods, rolling hard like pros to God in Heaven knows where. Basically, their mentally challenged minds decided not to use any form of decent maps to direct them in the right direction, and this, surprise! ends in disaster.

What a quality trio of roofied actors.

What should these bimbos do? Let’s get car molested by one of millions of German rapists, and then proceed to walk through a forest that should be NOWHERE NEAR a club they’re going to to get molested by tools, other than the man in the car who freaked all over them. They come upon the witch in the woods, aka the most frightening German actor I’ve ever seen in my life. And by that, I mean most frighteningly bad and creepy. Thank you Dieter Laser for haunting my dreams with your rape drug. Incidentally, this creepy guy, who never sets off any red flags for these girls, drugs the shit out these women and hides them in his furnished gaming room basement turned surgery lab. Thrown into the mix is a babbling Japanese man (Akihiro Kitamura), and two German detectives (were there subtitles for this movie?) and this Oscar caliber film has every element it needs.

These movie has no scenes of jump out of your seat horror. This movie has one gore scene of surgery

on an anus. This movie, according to my download, has no subtitles, leaving 30 minutes in the movie with a screaming Japanese man and two inquisitive yet incompetent detective asses. Great job on that one. With only the suggestion of horror by three people sewn ass to mouth with the love and care of a man who sexually abuses his dead canines, this movie is completely believable. Other than the fact that this movie exists, I completely believe the crazy German doctor could’ve done this. I mean,  this movie does set back the German community 60 years to the Nazi testing of old, but, you know, Tom Six handled it with pride, I’m sure of it. 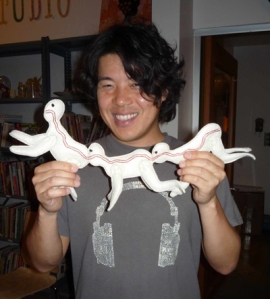 Great job Akihiro. Looks like you were done in by the rape drug.

So, overall, if you’re looking for a horror movie that tries to take a real situation and extend it to such an awkward and unrealistic extent, then yes, this movie is for you. With a disappointing amount of horror and more of a painfully long movie about a sexual fetish, then clearly this movie of actors with next to no experience other than avant garde pieces of crap (I can’t believe the amount of work Dieter Laser has been doing. It saddens me.) was meant for nothing more than a joke. This movie was worse than The Room. Hands down. Definitely a 0.1 out of 10. As close to a zero as possible.

This needs to be watched. It sums it all up.