I don’t know how long this review may turn out to be, but I have so much to say on the topic of Fullmetal Alchemist/Fullmetal Alchemist: Brotherhood. In what I would consider, and what others would consider to be one of the greatest and most well known anime of all time, Fullmetal Alchemist delivers on so many levels. It has so much going on and so many characters to follow and love that it’s going to be quite hard in keeping this short (that’s what she said).

All that being said, Fullmetal Alchemist: Brotherhood (And its original show I’ve watched as well, and own) is the story of Edward (Vic Mignogna) and

Too many great characters to count.

Alphonse (Aaron Dismuke/Maxey Whitehead) Elric. These two brothers are into alchemy, the mystic version of what we today call science. In a world apart from our own, Ed and Al delve into the inner workings of things like equivalent exchange (In order for something to be gained, something must be lost of equal value.) and alchemic circles. Seeming to be something of the occult, these two delve into what is common practice of the early 1900s.

Living happily with their mother and father (for a time, until he leaves) Ed and Al become engrossed in the world of Alchemy. Taking every opportunity they can to learn about its secrets, the two become formidable alchemists in their own right at a very young age. And then, tragedy strikes. 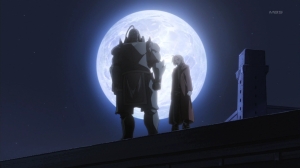 Ed and Al, two brothers on an adventure.

Struck down by some unexplained illness, Ed and Al’s mother dies at an unexpected and early time in her life. While the two of them are still young (7 and 9), they attempt the taboo. The attempt to perform human transmutation. With what appears to be a straighforward procedure, the two attempt to create life from the makings of a human (i.e. water, carbon, trace elements, etc.). What they don’t account for is what costs them. Taking Ed’s right arm and left leg and Al’s entire body, Ed barely saves Al’s soul by attaching it to a suit of armor in the corner of the room. Debilitated and with no family left except some loving family friends, Winry Rockbell and her grandmother, Pinako, these two burn down their family home and leave Risembool.

This leads Ed and Al to pursue the only other alchemic object that readers of Harry Potter will be familiar with. The Philosopher’s Stone. This magical object, in the context of FMA, can circumvent the need for equivalent 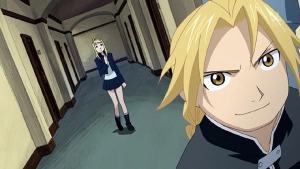 Always leaving Winry behind to cry...

exchange. This object, they believe, will allow them to get their bodies back and return to a life of normalcy. But with the heavy prices and hardships in store, it won’t be that easy. Providing his services to the military state of Amestris as a “dog of the military”, a state alchemist. With Al along, the two must discover just what it means to put it all on the line for the Philosopher’s Stone. 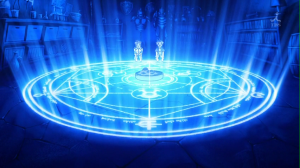 I don’t want to go into too much detail about the later workings of the plots that go down in FMA and FMAB. After a certain amount of episodes, the two diverge in plot. Fullmetal Alchemist doesn’t follow the original plot of the manga, while Brotherhood follows it exactly. Never having read the manga (I’m an anime person, sorry.) I didn’t have a problem with either. There is some big debate and divisive opinions on the matter, but I feel the two shows stand apart, despite being about the same things. Both are quite satisfying in the end.

In any case, the characters in this show are wonderful. So is the voice acting. Actually, if I may be so bold, the English voice actors are just as popular with this show as the Japanese ones. Funimation did things right when they got the rights to this show and casted accordingly. But enough about that for now. We have to talk characters. I guess I’ll have to talk about characters without revealing anything about the plot. Hard to do, but I’ll manage.

Well, there’s Ed and Al, of course. These two drive the plot and give 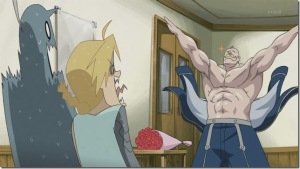 wonderfully heartfelt and considerate characters to the show. Ed can be a bit hotheaded (and therein lies the comedy) but his stubborn attitude and realistic view of the world really shape our view into the world of Fullmetal Alchemist. With Al, who’s just as important, comes the caring and gentle giant (because of the suit of armor) character that I secretly admire greatly. His only flaw and greatest strength is that he cares too much. Winry comes across as the weeping damsel in distress,  one of the only female characters in the show to do so. Functioning as a sort of love interest in what is collectively called a shounen, this girl can pack a punch… comedically, whenever she needs to.

Kimblee. Badass. All in white.

And then there are some of my favorite characters. There’s Zolf J. Kimblee, the most badass villain and coolest alchemist to grace the series. With the power to alchemically turn anything into a bomb at his whim, he lays waste to everything in his paste. His nonchalant attitude about life and the love he holds for chaos is something I find to legit to quit in villainous characters. There’s Scar, the Ishballan priest turned freedom fighter. After his people were destroyed in a civil war, Scar ditches his name and uses the powers granted him by his brother in order to kill those alchemists who wronged him. He’s a bit of a conflicted character who really jumps around in the series, but he’s well worth rooting for. Roy Mustang and his surly crew of officers. Mustang is a high ranking officer among the military and effectively rules it with his ability to set anything on fire. Mirrored in his fiery attitude, he has the ambition to rule the country as Furher someday. (Amestris is basically Germany in the early 1900s. Almost hard to swallow that they’re reflecting Nazisms in this show, but it’s a choice.)

Then there are these creatures in the world known as Homunculi. I can’t say anything more about the topic (it’s too damn important), but I can say that they’re named after the 7 deadly sins. Their powers and personalities reflect that, and look out for Greed, Gluttony, and Pride, three of my favorites. Wrath used to be one of my favorites, but he/she is two different characters in FMA and FMAB. All of the Homunculi are key in the plot and well worth picking your favorite for how diverse and interesting their characters are. With two different explanations as to their origins, you can pick your favorite.

Now that I’m thinking about all the things that FMA/FMAB has to offer, I am starting to wish I had done a separate blog on Fullmetal Alchemist. These shows are two worlds apart, and similar in so many ways. There’s just so much to go into in detail and scope, and just not enough time to discuss it in. I don’t want to bore anyone with a long winded review, but if you do have questions you’d like answered or a specific topic I should review on my blog, let me know via comment or something. I’d love to talk about it!

Oh, all the characters and the plot I can’t get into and all that good shit. I’m now seeing this review as more of a teaser than anything. The intricate plot and reveals of both versions are well worth it. The dialogue and emotions will enrapture you in joy and sorrow. I can’t talk this up enough, can I? Well I wanna mention voice actors in English before I give this show the 10 out of 10 it deserves.

Vic Mignogna is as iconic and well known for his voice as Edward Elric as the Japanese voice actor. Loved by many, he may always be recognized as Ed. Aaron Dismuke, one of the youngest voice actors to grace Funimation, got his start from a very young age as Alphonse Elric. With a voice that began to change as the show went on, it was all too unfortunate that Aaron could no longer fulfill the part. Maxey Whitehead did a good job in her own right, but there was

a distinct difference in Al’s soft spoken voice. Travis Willingham delivers well as Roy Mustang, the fiery commander of the Amestris military. In what I would consider an improved performance from the original FMA, he really allowed his character to come out in Brotherhood.

Caitlin Glass does a phenomenal job as the constantly emotional Winry at all the right points. I must say though that I liked Dameon Clarke far more as Scar than J Michael Tatum. The gruff demeanor of Scar, I feel, leans more towards a man of few words than a gruff sounding religious freak. Just saying.

You beat them back, Scar, you religious freak you.

Both good, just drastically different. Who else should I mention… Eric Vale was badass as Kimblee with his, “I don’t care, I’m nuckin’ futs crazy. I’ll kill you.” attitude. Enough said there. Laura Bailey is as sexy as ever as Lust, the sexiest of the Homunculi. Troy Baker, more than Chris Patton, in the original, provides a great “I want the world and I’ll do anything to get it” voice as Greed. And, exclusively to Brotherhood comes Lin Yao, a prince from Xing with one of the best scenes and deliveries in the entire show, done by Todd Haberkorn. The goofiness of Todd disappears behind the character of Lin Yao and become something entirely different. And, of course, Christopher R. Sabat is amazing as with everything he does as Alex Louis Armstrong, the Strongarm Alchemist.

So with all these great things all in one amazing anime, why haven’t you already seen this/are watching it now? There’s no need to read this review when all I could have said is watch this show. Watch Fullmetal Alchemist and tell your friends about it. Subbed or dubbed, it doesn’t matter. Watch both versions and compare, let me know which one’s your favorite. Bask in the glory that is FMA/FMAB. It’s all good so trust The Abyss and jump right in. It’s worth it. 10 out of 10.