Tag Archives: based on a novel 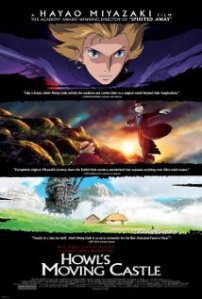 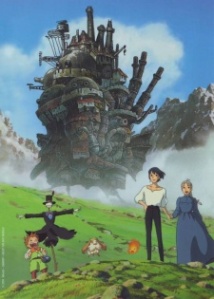 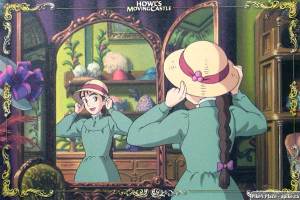 Eve no Jikan: Time of Eve

Wow, it’s been a long time in the making, but this is my 201st post, just passing my 200th. I am now, after this, completely caught up and ready to go on to new up to the minute update sort of things. What I mean is my posts will be more raw and fresh in my mind because I just watched it. My list of updates/posts is done and it’s time to revitalize this old beast. So strap in for this last amazing little anime review and then get ready for Misfits Season 3 afterwards. You’re gonna have no idea what hit you with that one.

In Eve no Jikan/ Time of Eve, the world has been revitalized by robots. And, most recently, it has upgraded to androids who can act and look like humans. It’s your basic I, Robot issue right here. Right down to the 3 laws that govern robots. This might have taken some cues from the novel I, Robot was based on. Anyways, Rikuo Sakisaka is a 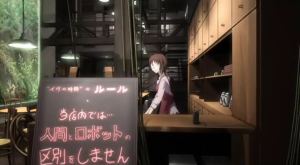 There’s only one rule here in this saloon.

teenage high school boy who has an android at home, Sammy. She cooks and cleans and makes one mean coffee. Upon updating her one day, Rikuo comes across some odd place that Sammy went in his phone. Inviting his friend Masakazu Masaki to come along, they both stumble on something that it taboo for both of them.

All the wonderful characters and images!

Time of Eve, this hip little cafe is made for robots and humans. And the only rule is that you are not allowed to discriminate between them or call the other out. The only real difference between the two of them is that androids have halos above their heads. But in the Time of Eve cafe, it goes away and both become human (in a way).

At first, Rikuo and Masaki are horrified at what they find. They know that treating a robot like a human is a stigma among humans, known as dori-kei or adnroid-philia. To treat or love a robot like a human is wrong to these boys, and that’s what makes this cafe so frightening. Over time Rikuo finds he likes coming to the cafe and a gap is bridged between robots and humans. Analyzing the loopholes of the laws that govern robots and what it means to “protect humans”, Rikuo and Masaki’s lives are changed by the Time of Eve. 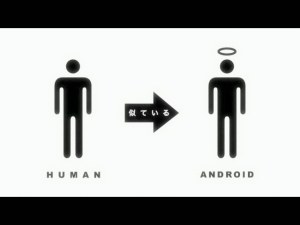 Can there be love? Or constant separation?

This anime is very character driven and very touching. It has its funny moments when the music stops and the camera zooms in on an awkward moment or something, but overall heartwarming. The regulars of the cafe are humans and robots, and there’s no need to try to tell the difference. Every episode focuses on a different regular, eventually coming full circle. There’s a wonderful little girl named Chie who thinks she’s a cat. Some wonderfully old school robots who just want to be treated like humans, and Sammy, a robot who just loves her master.

I’m glad to see a movie was created after this anime came out. Found only on the internet as an ONA, this anime has been lucky enough to become popular enough to be made into a full length feature. (I have yet to watch it, but I would probably say the same things about this that I would about the movie.) It’s one of those quick anime that 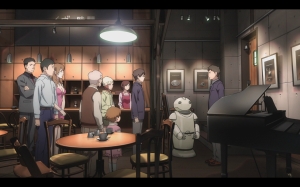 A touching scene, one right after the other.

passes you by, but leaves a warm spot in your heart that stays with you, long after you may forget the character’s names. This anime sends a message about the future of our world and whether or not it is okay to discriminate now and in the future as well. And I would say that’s an emphatic no.

It’s quirky at the same time that every episode ends on a small tear streak down your cheek. The animation style is fluid and breathtaking, combining 3-D animation with 2-D humans and characters. This technique makes the characters stand out being flat in this futuristic world. The camera rotates around the cafe as if it is a real life scene, speaking to the movie lovers in all of us. Coming from a sci-fi background that has only seen flat and unemotional characters, this future set sci-fi genre anime breaks the rules and makes you feel. There may be hunks of cold metal onscreen, but they have warm hearts. That’s what I found cute and appealing about this 6 episode anime. It sucks you in with these short episodes with a trilling and romantically inclined music score, and leaves you feeling good at the end. Any anime like that deserves an 8.8 out of 10.

And here’s a cool AMV to prove my point.