So I saw an amazing AMV for this anime at Anime Boston and I was hooked. ( To this and t.a.t.u.) This anime, based on a video game really caught my attention. Its plot and characters are really strong and its premise taken from the video game is also really interesting. Makes me really wanna find the game and play it. I’m not exactly sure what the title of the game/anime means, but it evokes images of the anime from now on in my mind.

This anime focuses around Shiro Emiya, the son of an adopted father that taught him the virtue of helping those less 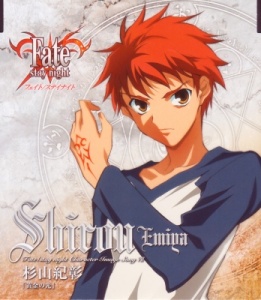 Shiro. He just wants to help.

fortunate. When his father passes away, he leaves his entire estate to him, and Shiro continues his pursuit of justice and fairness and help for those who need it. And then one day everything changes. When Shiro witnesses a battle between what seems to be two warriors, he runs away and is stabbed by one. Rin, a fellow classmate saves him and it is at that point that Shiro summons a Servant, Saber. Rin and her Servant Archer team up with Shiro and Saber and these two discover exactly what is going on.

What is going on is that they are in the middle of a centuries old battle for the Holy Grail. There are seven Masters and seven Servants that are fighting each other for control of that Holy Grail in order to grant their wishes. The only way to eliminate competitors is to kill the Masters or kill the servants. From the beginning it appears that killing Masters is more effective, for the Servants will just disappear. But things drastically change this time around as the battles continue. With Shiro’s attitude and the relationship he develops with Saber, nothing will ever be the same for these magical warriors battling for their lives. 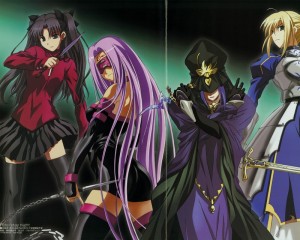 Those are some sexy Servants/Masters.

And that’s what I like about this anime. Though it focuses around the battles, not all 24 episodes contain violent action sequences. Most focus on Shiro’s attempts to quell the violence and find another way in which they can avoid confrontation and yet acquire the Holy Grail. (And I won’t even get into how complicated the Holy Grail itself is.) Shiro is constantly, and pretty much annoyingly, protecting Saber and preventing her from her primary function, fighting. But it grows on you as the anime progresses. And that’s where they social/relationship aspect of the show grows from. You begin to discover the pasts of the characters and really wish that not a single character would die. (Kind of the case… Hard to explain.)

But there are great characters in this anime. Shiro, of course, is a conflicted, troubled, angsty main character that really has to use the anime to work out his issues. Rin, his fellow student and collaborator helps Shiro as much as she can while trying to gain the upper hand over him. Illya is a little girl with a tragic past that only needs help from others, and yet at the same time is spine-tinglingly ruthless. Shinji Mato is a troubled boy who only wants to prove himself and meets challenges in his own way (I rather like him and his Servant.) And those are just the Masters to name a few. There’s Saber, Shiro’s Servant with a ruthless attitude that borders on heroically suicidal. Rider, Shinji’s Servant that is sexy and majestic at the same time. And Archer,

Rin’s Servant with a hard exterior and heart of gold complex. And all these characters are based on mythological/historically ancient warriors. It’s great.

These amazing characters set against a modern backdrop sets up what comes out to be an amazing anime. The battles are epic, the Noble Phantasms are great powers to have, and the mana, attacks, and spells come right out of the video game realm. I’ve never thought of how easily story driven video games can easily be turned into anime/cartoons, but they can, and they have. (Tales games, Final Fantasy, ect.) So please, check this out, it’s worth a watch.

Check out this AMV. It’s amazing.