Interview with the Vampire: The Vampire Chronicles

Most of the time when you hear a vampire movie is being made, you don’t ever think it will ever get any Oscar buzz. In the case of Anne Rice’s novel turned movie, Interview with the Vampire, that’s a different story. Winning best score and art direction, even

nominating Kirsten Dunst for best supporting actress, this movie cleaned up for a drama about blood suckers. With an all star cast including Tom Cruise, Brad Pitt, and Antonio Banderas, what woman could resist the allure of at least two hunky men? For me, I couldn’t resist a movie spoken in Old English (Shakespeare style).

At the start of the film, we encounter a reporter (Christian Slater, supposed to be played by River Phoenix before his untimely death) following an interesting man with long hair. Before he knows it, he is cornered by what he finds to be a vampire from the late 1700’s. His name is Louis (Brad Pitt, french pronunciation) and instead of sucking his blood dry, he tells him of his story. How he was turned and why he is here, now, telling him all this.

Is Jumanji what tainted this wonderful performance from Kirsten the child actress?

It all starts when Louis loses his wife and child, feeling as if he is a soulless human, wandering through the world in a cold daze. Seeking any means of escape, he encounters Lestat (Tom Cruise), a malevolent vampire who wishes to fulfill his wish, but not in the way he thought. Becoming companions, Lestat teaches Louis the way of the vampires and encourages him to enjoy the new life he has now. But Louis’ problem is that he still feels human with compassion and sympathy, not wanting to live a life alone, in the dark. Forever.

The movie moves through to the present day, skipping a few decades here and there, a century or more until we come to the point where

Brad Pitt is talking to Christian Slater. It’d be interesting to see Louis enter the 20th century, but the movie was 2 hours long as it was. It covered all the important parts of a period piece film, with elegant and regal outfits galore. The music I didn’t notice as much (sorry those who won an Oscar for the soundtrack) but I was more swept up with the look and feel of the film. Elegant, but always with that underlying element of death.

I had tried to catch this movie earlier, but I’d only seen snippets of it. I always came in on that depressing scene with Kirsten Dunst and I was like, “I gotta check this movie out.” Sitting down to an elegant (not Underworldy) film about vampires, I had no idea what to expect. Anne Rice, another woman who wrote about vampires? Pleasantly surprised was the end result.

I really liked all the performances in the film. I think that, and the writing/scripting for the film really set it apart from other vampire movies. You felt like they were humans first, and you forgot that they were out in the dark all the time. The language is poetic and fluid, and seems to slip off their tongues as if it was first nature. Tom Cruise (although people may shit all over his attempts as an actor for his beliefs in Scientology) was ballin’ in this film. He’s one of those actors that you know it’s him, and you’ll always see him as Tom Cruise and not the character he’s playing. But by god, he can deliver a vengeful rage of a line or something just as emotionally stirring. He’s a very 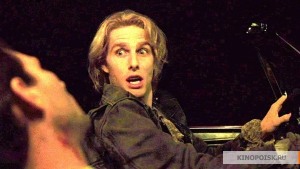 engrossing actor and needs to be given credit for it. Beliefs/opinions needs to be separated from a body of work. They have nothing to do with each other.

As for the rest of the cast, they all did just as well. Brad Pitt (other than a Fabio looking vampire with long hair) is emotion filled and  a likable main character. That’s what he usually is. Kirsten Dunst was a phenom as a child actress in this movie, playing the adult in children’s clothing, Claudia the vampire. You know those performances where you see it and you think, “That girl was in Spider-Man with a snaggle

Vampires you can fall for.

tooth…” That’s a “wow” performance. Antonio Banderas, you don’t see him that much anymore these days (other than Nasonex commercials). But I appreciated his accent all the same. The Hispanic Schwarzenegger. Rico Suave.

With a great cast and some spectacular settings, who wouldn’t believe this was a well done period piece. And I love a good period piece. This film deserved awards and it really focused on the humanity of the vampire. People didn’t like The Queen of the Damned in the mind of Anne Rice, but we’ll see what I have to say on the matter… 8.5 out of 10.