I’m not usually a fan of pre-2000’s anime. I love some of it, but a big killer for me of such a wide array of anime is the choppy animation. I know the times have been a-changin’, but that’s just the kind of person I am. I’m excited with the direction that anime is going, and this is one of those shows that kicked it off. Blue Gender is the show of a post-apocalyptic Earth that has been disheveled by gigantic bug creatures called the blue. One of those mecha shows in line with Evangelion and a little bit of Gundam, this show provided more than action, it provided mental breakdown and disaster.

Blue Gender is the story of one man, Yuji Kaido (Eric Vale). Let’s start off by saying I was happy to see Eric Vale do good justice to another hero in a series of heroic mecha shows I’ve seen him do. Anyways, Yuji is a sleeper, one of thousands of citizens of the world that were sent to sleep in the 2000’s. Now, 22 years after his slumber began, Yuji is abruptly awakened into a newly advanced world that is being slowly destroyed by a gigantic race of bugs. You may be wondering, “How did these bugs get so damn big? Are we in Honey I Shrunk the Kids?” No, that’s a strange assumption to be making. It will all be explained at the end.

So Yuji is accidentally awakened and he spends the first episode yelling and running around this scientific facility, trying to figure out what’s going on. He nearly dodges death and finds his way into the arms of a young, unfeeling cadet, Marlene Angel (Laura Bailey). The two of these spend a big majority of the show attempting to get into space to regroup on Second Earth. And that’s not where the show ends. That is a big discovery and a secret I will keep. Well worth the wait that this show still delivers all the way until the end.

At first this show started off similarly to Casshern Sins (refer to earlier blog if you need a refresher). Yuji and Marlene’s gang of soldiers are in a race to beat the clock back to Second Earth. But a lot of people die along the way. But a lot of new people are met at the same time. The first half of the show, basically, is Yuji’s discovery of just exactly the difference is between living on Second Earth. The schism between the two is brutal and astounding to him. This is where the heartfelt apathy is felt for humans in general. Then the show picks up with a lot of action and some role reversal, and you’re left with a “we must save the world” situation.

I don’t mind this construction in anime. What I did mind was a not so subtle undertone of sex in this sci-fi/horror/mecha anime. With this whole idea of 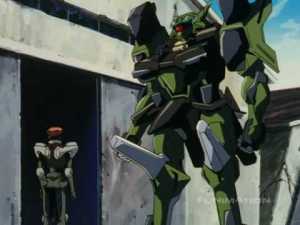 Yuji and his B.A. mech unit.

free love and no consequences came off as strange. Nobody cares about each other and this is really emphasized through Yuji’s eyes. But what I don’t get is that all this free sex is unabashedly displayed and done in front of everyone else. I get that this is a common theme in sci-fi novels, but I think it reflects poorly on the genre in that it really doesn’t have to do with anything and just comes off as awkward. 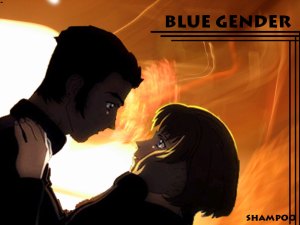 This show gets steamy.

Animation-wise, the show looked fine. There was a good deal of gore and mature content, and I was okay with that. I can imagine its stint on Cartoon Network’s Toonami must have been greatly edited. The recording of the dub was a bit low and I missed some key lines throughout. I don’t know if it was Netflix, but that was a bit of a problem and detracted from watching it. But that opening song sure is bumpin’.  Overall, I really enjoyed that this show was more than your average mecha fighter. The characters had fight and soul, and it made out for a better plot and drama. I’m sure some other anime could take some cues from this formation. A well deserved 8.4 out of 10.

Hey all you readers out there! It’s been too long, so now I’ve returned in full force! Expect over the next few days to be reading over 10 new posts! I’m pumped and I hope you all are too. So let’s get down to this.

A little while ago, I watched Casshern Sins, the story of a mecha dramatic tragedy in which the world is ending and there’s no glimmer of hope in sight. And who is this tragedy all due to? Casshern. The misunderstood tragic hero of this tale is said to be invincible. By destroying the Sun Called Moon, Luna, Casshern has gained invincibility and is now sought by all robots to be consumed. Why he is sought to be cannibalized, you may ask? Casshern, with his everlasting life, appears to be the only cure in a world that now is overrun with the Ruin. The Ruin is a disease of sorts that begins to slowly errode the machines. With their metallic bodies rusting, it seemed as if the immortality that had been achieved by humans and robots alike. With the meshing of these two races into one race against time, Casshern must rediscover his murder of Luna and the world in which he has destroyed.

Now, to tell the truth, this anime threw me for a loop. I had caught the first 4 episodes at Anime Boston and I found it to be dark and interesting. With a sort of

The interesting art of Casshern.

animation and drawing style I’d never seen before, the first 4 episodes seemed to flow with a slow undercurrent slowly building. Never having seen what Masaki Takei has done before (it seems as if he’s written/created smaller works dealing with sci-fi/fantasy) I was intrigued with the way in which this anime looked. With swooping hairstyles and slender, fluid characters up against the blocky, brutal masses, this sci-fi drama blends the worlds of what’s real and what is seen as the apocalyptic future into one. 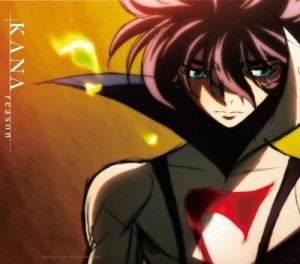 What really caught my eye about this anime was some of the voice acting. Not knowing which characters would remain constant after the first 4 episodes, I found Eric Vale, the voice of Casshern, to be a compelling and distant character. His innocent voice withholding power to end lives creates a construct in a character often show in control, but that’s the last thing that Casshern is. Lyuze (Brina Palencia) gave another angle to Casshern Sins with a character with a soft side and revengeful edge. Another few actors that round out the top actors of this anime are Jerry Jewell, Shelley Calene-Black, and Jason Douglas, characters that’re introduced later in the anime.

And now I come to the bad point about this anime. The cyclical nature of this anime is its downfall. Despite the draw of the first four episodes, the following 20 episodes follow in the same fashion. Casshern, on his journey of discovery, comes across characters with tragic and emotional pasts. And what happens? He passes on past them and continues on his way. Either through destruction or heartbreak, Casshern can’t seem to come to terms with those around him and his uncontrollable power. But this anime, if you can get past its monotonous pace, really makes up for this in its art style and fluid animation in a rigidly dying world. So I encourage you to check it out. I give Casshern Sins a 5.8 out of 10. The Abyss is back in full force! 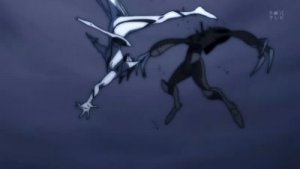 If anything, the fluidity may blow you away.