Pinhead is back for another romp in the hellish world of pain and pleasure in Hellbound: Hellraiser 2. I have to wonder where the issue of pleasure comes in though, because it just seems like a lot of pain and screaming without any of the fetish of sadomasochism. Maybe that’s the moral of the story. Sadomasochism really isn’t for anyone. In any case, let’s jump right into the continuance of the first film, as told by Kirsty.

The movie opens on a scene of Pinhead (Doug Bradley) as his normal, WWII self. Discovering the evils of the box in his bunker, I found it was a great opener to delve into the world of the killer, and find out that Pinhead isn’t really the worst guy in the world after all. He was transformed by the puzzle box, becoming the evil person he is in Hellraiser 2. Or so we’re led to believe. Fast forward to a short period after the first film and we’re back with Kirsty (Ashley Laurence). I give Miss Laurence a lot of props for coming back to a series that, at the time, may not have been received all that well. Whether it was for the money who she saw promise in the series, I congratulate her effort in playing the female antagonist in this film.

That can't be pleasant...

So Kirsty is in a mental asylum. I know you’re thinking, “Hey, was the last movie all a part of her delusion? What a cop out.” But no, that’s not it at all. All of the events of the last film happened. Frank killed Kirsty’s dad and wore his skin. Who, accidentally, killed Julia and allowed her to be sucked into a mattress of the Cenobite’s design. And after all Hell(raiser) breaks loose, Kirsty somehow escapes and is now confined to aforementioned asylum. The detectives don’t believe it when they question her and decide to leave her there. Immediately, Dr. Channard (Kenneth Cranham) seizes this opportunity to examine her, because, as we discover, there’s more to Dr. Channard’s interest than we may know…

But then a whole lot of redonkulous events goes down. Julia (Claire Higgins) is reanimated from the mattress by a writhing, bleeding lunatic. She proceeds to relentlessly eat Channard’s face (in the sexual manner) and suck the lives out of a few men, Mummy style (I’m glad this idea always comes back in these movies). The Hellverse is opened and Pinhead and the gang are once again allowed into our world. But, and here’s the twist, Kirsty and this catatonic puzzle solving girl, Tiffany (Imogen Boorman) follow Channard and Julia into Hell to bring the fight to the Devil’s door. Well, not necessarily the devil, but something similar.

I don’t want to spoil too much, but it’s worth watching at least up to the second in the series. (I’m up to number 5.) A lot is explained in 4 (Bloodline) although it may be considered the worst in the series. I just enjoyed finding out about

Julia, back with a bloody vengeance.

the Lament Configuration box and its origins in history. Pinhead becomes a better fleshed out villain than a lot of horror series give credit to their slayers. (The only exception to that rule is Freddy Kreuger, maybe Mike Meyers.) We learn about the man behind the pins and begin the road to sympathy, something most people don’t like to see in sadomasochistic serial killers.

As far as this movie doing justice to the first one, I would say it came about 3/4 of the way and then petered out towards the end. The ending itself is kind of a buzz kill to the rest of the series, but don’t worry, it’s not over for Pinhead and Chatterbox anytime soon. It still has all the gore and claymation animatronics you’re looking for in this groundbreaking series. It lays a basis for the series and doesn’t beat a dead horse with its plot. It picks up where it left off with no complaints. I was happier with the acting in this film and I felt the amateur returners to this film hit their stride and knew what was expected of them. I was a bit disappointed in the haunted house feeling that Hell had, or, the MC Escher style the art exuded(shout-out to Max for that one), but it’s all the past. The movie came to do what it did and did it with no fuss. Can’t fault it for that. So I’ll give Hellraiser 2 a solid 6.5 out of 10. And I hope you’re all looking forward to my Hellraiser 3 review.

As I frequently do with my friends, it’s time to begin the watching and review of another classic horror film series. This time (and soon to follow, others) it’s the Hellraiser series, the brainchild of Clive Barker. In the vein of sadomasochistic pleasure and pain in the extreme, this movie explores the avenues of prosthetics and  stop-motion animation in a way to frighten and disturb. With a new chapter in gore created, Stephen King said it best. “I have seen the future of horror and his name is Clive Barker.” Ebert might not believe this statement, but what does he know, right?

At the start of this movie, we encounter Frank (Sean Chapman), a two-bit, no good, gangster of a hoodlum. He has found this box on the other side of the world and plans to use it to explore the extremes of pleasure and pain. Upon solving the box in his “zen temple of an attic”, the Cenobites (creatures from Heaven and Hell) come to him to show him the way of the flesh. As Pinhead (Doug Bradley) says, “We have such sights to show you.” Upon ripping his flesh and bones from his body and dragging him to a Hell brought on through a wall, Frank says bye-bye to the world. 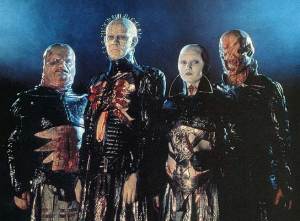 Years later, and for no perceivable reason, Frank’s brother Larry Cotton (Andrew Robinson) brings his strangely detached wife Julia (Claire Higgins) and rebellious daughter Kirsty (Ashley Laurence) to live in merry ole London town. Although only his wife is English. And there may or may not be an issue with accents in this movie for people perceived to be residents of the U.K. You make the call.

Have you learned anything, Frank?

While here, Larry Cotton absolutely destroys his hand on a rusty nail (check dat shizz for tetanus!) and accidentally brings back the remains of Frank’s body from the other side. It is then up to Julia and her past affair with Frank to reanimate his body, Imhotep/Mummy style. Bring on the parallels. Oh, and it’s up to Kirsty and her “boyfriend/interested bystander” (Robert Hines) to stop them. Get it goin’.

There were a few things that, after watching this once before at night, that I was in love with. I loved the reanimation scene of Frank’s body. It was absolutely grotesque and ballin’, all at the same time. Stop-motion animation, like in Sam Raimi’s The Evil Dead, just gets my horror juices flowing. I wish more movies went back to the days of the clay. Accompany this with a Mummy worthy stand in of Oliver Smith as Frank’s decayed, yet regenerating body and you have the creepy crawlies when you see his muscles moving over bone.

The images of Hellraiser.

There were a few things that doesn’t work either. The believability of Frank and Julia’s affair. I liked the tie in to the sadomasochism with their violently physical relationship, but there was no real sizzle at any point in the movie. Yes, you get a bit creeped out when she kisses Frank’s unfinished body, but what can you do? Another thing. The strangely over the top acting from Larry Cotton. I don’t know what this guy was shooting for, but it really was absurd. Thank God for the Cenobites coming in to bring some acting chops (pun intended with Chatterbox) to this film. Kirsty wasn’t too bad, I mean, they invited her back for the second…

So pair these lacking parts with a breakthrough into the genre of gore/horror, and you have my favorite genre. When you can overload someone’s senses with horrifying images and a few jump scenes, what’s better than that? And the simple fact that Clive Barker’s vision for this film sparked 7 other movies? Let me get a piece of that action. With these cult classics comes some of the best horror of its time, and one of my favorite horror series in the collection. Thanks Netflix! A solid 7.3 out of 10 for this groundbreaker.