The Dark Knight Rises: I Was Born In It…

Sorry I’m a bit late on the uptake with reviewing this movie, but I did see it, so I do need to review it. This movie, as the whole series does, holds a lot of mixed feelings with me. People moan and complain about the past Batmans (never had nipples, I get it), and rant and rave about how this series is the end all be all of Batman fandom. That’s great, neat-o. People have all different kinds of preferences when it comes to comic book 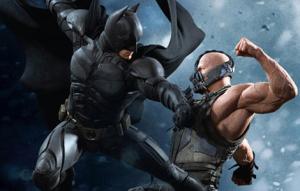 Hello there, Mr. Batman (in a Sean Connery voice).

heroes and the types of ways that they’re represented, but get off my back when I say I am a bit more nostalgic and partial to the original Tim Burton films. Jesus…

But, that doesn’t mean I didn’t enjoy these movies. We all must remember that these are movies about fictionalized characters from comic books made mostly for the demographic of children to teenagers. Being in college, I can claim, just on the border, that it still applies to me. And hell, these movies only apply to people my age they’re so damn dark these days. I never read The Dark Knight series, and I don’t plan to (not a big comic person). Christopher Nolan can do what he wishes, but just because he made Memento that film kids orgasm over, doesn’t mean he’s the best director and visionary of all time.

And therein lies where my grudge starts. I enjoyed Batman Begins for its iconically classic cheesy action lines and origin story. For a lot of other fans, that movie is shit in comparison to The Dark Knight. Sure, in hindsight, any movie is better than its predecessor (very rarely). But please, respect the originators. The Dark Knight was good as well. Great story, not the best film of all time, because remember, only dramas and artsy films win Oscars, and as much as I would like that to be changed, it won’t. So stop pretending that this movie deserved Oscars, it ain’t gonna happen Nolan.

And then, it all started. Nolan made Inception. The stupid dream within a dream jokes started. This film may be visually pretty, but in lacks when all the hype built around its release left it wanting something. And then, as if to pay homage to a film that has nothing to do with the Batman series, to service the fans, Nolan does something I find strange and deplorable. He puts Marion 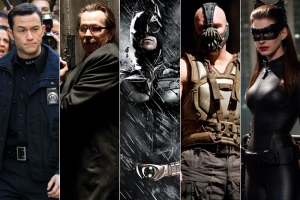 Cotillard, Tom Hardy, and Joseph Gordon-Levitt all into the Batman series. With plenty of other candidates out there to try out, he did that whole in-circle movie inclusion thing. All I’m saying is, if I were a director, I would want to work with lots of varying talent and not stick the same old actors into every movie. I wouldn’t have been surprised if Nolan replaced Christian Bale with DiCaprio…

Now that my rants over, let me start a conflicted review about The Dark Knight Rises that people probably won’t read because I’ve already forced out everyone who lives and dies for this series anyways…

So, I gotta say this movie was really hit or miss for me. I love Christian Bale. Plain and simple. His depiction of Batman is

Christian Bale, may you never change.

satisfactory, and one of the only things that keeps me watching these movies. Sure, he does the whole deep voice thing, but isn’t that to entirely mask his identity from other people? He messes up once in the movie by continuing to do the voice although Catwoman knew who he was. But maybe it’s just a mentality thing.

The other thing that made me watch this movie, an amazingly and surprisingly good performance from Anne Hathaway as Catwoman. I’ve loved her ever since The Princess Diaries, and this movie solidifies that she is an actress of all genres. She’s witty and sensual in a way I didn’t know she could be, but not a pushover or bimbo as some comic book villainesses are depicted. A perfect counterpart and conflicted villain of Robin Hood status for this movie.

The only other reason I liked this movie? My adoring nature for

She even makes the orange look classy.

Joseph Gordon-Levitt. I’m talking Brick, even throwbacks to when I used to watch 3rd Rock From The Sun occasionally. The Lookout, 50/50, his hits just keep rollin’ on. He was one of those sleeper actors that, once given the chance, showed he could do great things. And his twist reveal at the end of this movie was worth waiting for.

Now come the hang-ups I had about this film. First off, it was too long. I don’t know what makes Christopher Nolan pack so much material into a movie I felt could be 2 hrs tops, but he exhausts every single thing he can thing to put in a script and doesn’t understand the meaning of “edit”. Once it hits Batman in the prison of doom, I started to fall asleep. After the last battle, I woke up for the unnecessarily long wrap up ending.

Do you see the likeness, brother?

Bane. Plain and simple, the way Bane is represented in this movie. It’s a big step up from the poison addled Bane of the Clooney times, but it ends up amount to little better than a lackey. I had a friend tell me all about how Bane was so smart and could beat Batman physically as well as mentally in the Dark Knight Series. What do I find out? Bane is a pawn in a much bigger game. And what’s with that voice? Did Sean Connery get a Vader mask and forget to go through puberty? This comically funny voice ruined any chance at making him a legitimate contender for good villain in this movie. Cillian Murphy’s appearance again as Scarecrow in this movie was more entertaining and evil than Bane was. Sad.

Marion Cotillard. Her twist ending as yet another villain biatch in a Christopher Nolan film saddened me. It felt like an unnecessary cop out and exhaustive effort on the writer’s part to make this a cyclical film. Even if this is how the Dark Knight comics went, change it. It sucked.

There’s a lot of debris in this movie…

film with a cliffhanger stuck on for good measure. (Seriously, people complain about how explosions take over substance in Bay’s films? Nolan should take a quick peek in the mirror.)

That’s not to say the movie wasn’t entertaining. As most action films for me (and this is nothing more than a “psychological” action film) there are good and bad parts. This was really divided down the middle for me. I would watch it again, and it would become one of those classic movies me and my roommate quote to pass the time. I don’t mean to over emotionally disrespect on anyone who really liked this movie. It may have just hit me at a bad time. Only time truly will tell. But, as for the overall delivery of this movie, in all its components, I’ll give it a 6.6 out of 10.