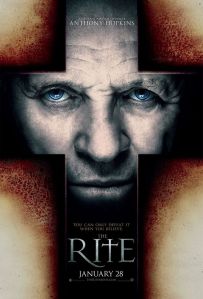 I gotta tell you, I’m a sucker for exorcist/devil related films. Any horror movie that tries new ways to prove the Devil walks the earth, I’m on board with believing it. These movies are usually more frightening than gore/slasher/paranormal films. Why? There are a lot of people out there who pray for their immortal souls. Why? Because demons and the Devil himself walk among us, waiting to corrupt us and enter our bodies. In The Rite’s case, no human being is an exception. We are all judge and condemned by spiritual forces. By God himself.

Now, I’m a realist. But I love losing myself in movies like this. Any preacher/demon interaction scenes give me goosebumps.

A good shaking of the faith scene here and there is good too. And I love directors/writers who push the boundaries on exactly what it means to be possessed. Different symbolical entities that manifest themselves in unspeakable ways are always something of an interest of mine. Without a strong biblical background, I love the ways the Bible is used to push the envelope with demons and what they can do on a mortal plane.

But anyways, enough of my obsession with the possessed. This movie follows the religious experiences of one Michael Kovak (Colin O’Donoghue). I’ve not seen this guy in any other films, but I was quite impressed with his “I don’t believe in faith” performance and the scientific approach he took. But Michael has two options in his father Istvan’s (Rutger Hauer) eyes. He can either pursue the life of a mortician or that of a priest/preacher. Choosing the less morbid/path his father didn’t choose, Michael begins his training as a priest.

Michael's first experience with an exorcism.

But his faith has never taken any form in Michael. And so Michael’s religious teacher, Father Matthew (Toby Jones) (Great little performance from a great English actor.) suggests Michael take an exorcism class in Italy. It is here that, with no faith in Father Xavier’s (Ciaran Hinds) teaching, is asked to seek the exorcistic teachings of Father Lucas Trevant (Anthony Hopkins). And with this, Michael is shown the tricks of the Devil, and the demons in himself he must conquer.

Now, I need to extoll how good Anthony Hopkins performance is. For the first half of the movie, he plays the nonchalant exorcist. This guy goes around curing people of the Devil himself, no big deal. This guy could care less about whether or not Michael believes in the Devil. He plays the carefree teacher who doesn’t care about his pupil. But then, out of nowhere, due to a shaken faith, Anthony Hopkins channels straight Hannibal Lecter. Could not believe where this came from (can’t tell). But you have to watch how amazingly evil Anthony Hopkins becomes. (Interesting note, there’s a mention of a “Welsh priest.” Coincidence that a movie based on true events would include a role with a Welsh older man? Gotta be fate, or gotta be Hopkins.)

Another little kudos for this movie: special effects. There are 3 scenes in which computer graphics are

Anthony Hopkins. Are you scared yet?

employed. That’s it. Everything else: make-up artists/actual tricks of the camera. When a movie can pull of subtle elements of horror without overdoing the special fx function, then it deserves to be noticed. I feel as if this movie was overlooked as far as horror movies go. This movie has a great balance of horror and plot. Something to watch and take stock in. And that’s worth the few intense horror scenes that’re shown. This movie almost felt like it was the prequel/setup for The Exorcist. (Michael Kovak goes to Chicago to be a priest. Coincidence?)

Pray for your sins. The Devil is coming.

Great Italy shots of Rome and Vatican City. Beautiful buildings to function as B-roll between scenes. The buildings looked (could have been?) Actual religious buildings in Vatican City. It was a great visual experience. I give credit to Mikael Hafstrom, the director of this film. Having some horror movies under his belt already, this Swede really has it down in his 13th film. So thank you, all that worked on this exorcism film. It was great. 8.8 out of 10.