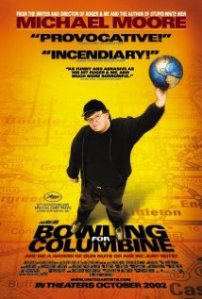 In one of the only documentaries that I respect of Michael Moore’s, Moore investigates the gun culture that takes America by storm. Looking at it from the angle of the Columbine High School Shooting, Moore suggests that the gun nuts of America and the way in which we perceive the 2nd Amendment is basically bonkers. Anyone can get a gun and they’re not always used for self defense or hunting. From the get go, you know where Michael Moore is coming from, and pretty much this whole documentary ain’t pretty.

Named after the fact that Eric Harris and Dylan Klebold went out bowling the morning before they tragically went wrong, Bowling for Columbine takes us to the ten pins. After some frightening images here and there, Michael Moore can never seem to help 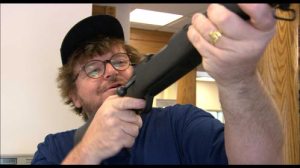 A frightening image of a man.

attacking the administrations in power (more often Republican than Democrat) and the wrong things they always do (never the right). With a documentary such as this that tackles everything related to and around guns, Michael Moore correctly attempts to narrow down the cause for all the gun violence in America.

He compares the U.S. to other countries, examines what other people have blamed for gun violence, and brings it all crashing down on Charlton Heston, head of the NRA. In what I thought was his best 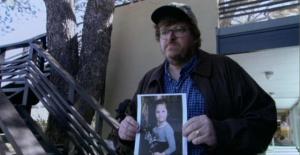 Let me just scare Charlton Heston into saying he’s sorry. Will that help?

segment of the documentary, Michael Moore allowed Marilyn Manson to defend himself with a wider audience than he may get otherwise. (Not to say he doesn’t, he’s an amazingly talented and magnetic performer.) Manson proves himself to be an intelligent and understanding person (contrary to the images and rants against him) and shows that compassion and listening may have helped the shooting and others around the world.

But I stop here for a moment to acknowledge information that has come to my attention. Thanks Wikipedia, although you may be wrong some of the times, you bring things to light I never knew. In the 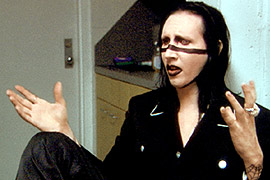 criticisms of Michael Moore’s documentary, he is annihilated. Some of it may have been by conservatives who believe in the right to bear arms, but a lot of it is coming from those he wronged in the film and otherwise. He was wrong about Lockheed and the particular plant he went to. He was wrong about the violence rates and some of the causes. And he ambushed Charlton Heston (as I felt he did) and inaccurately portrayed Trey Parker by associating him with the cartoon he showed minutes after.

Here’s where most people should come up against a brick wall with Michael Moore. He’s fat. He’s gross. These two aspects of his outer appearance would frighten most people he would talk to or try to approach. (I can understand that police officer wandering off when Michael Moore complained about the Hollywood sign. He had better things to do.) When listening to him talk and seeing the way he presents himself, it almost appears that he has a mental disorder. No joke. The way he holds himself in his documentaries gives a lot of people pissed off impressions of him. And sometimes rightly so.

One of the more well done parts with Moore helping out victims of Columbine.

Because it didn’t just stop here. He goes on to make 4 MORE DOCUMENTARIES ATTACKING THE REPUBLICAN ADMINISTRATION. At this point, he has turned into a huge gargantuan baby who is fed up with the system. He whines and puts up his yellow police tape and carries his bag around crying for money for the people. His head got bigger than it should have after the success of his first few documentaries and he thought that was a green light for as much more as he wanted to make. For shame.

So although I liked the idea and parts of this documentary, when Michale Moore puts his name on something, expect the huge range of bias he’s bringing to the table. Don’t take everything at face value. Because although in this very documentary, Michael Moore says that America has a state of fear going on, he is 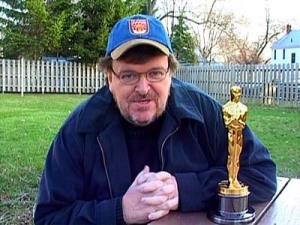 Well deserved? You be the judge.

perpetuating it and stirring things up more by showing us why we should be afraid and not other things like invigorated to fight or do something. Damn it, Michael Moore, show some class. And that’s my rant. Bowling for Columbine, 6.1 out of 10. Michael Moore as of today, a whiny baby 0 out of 10.