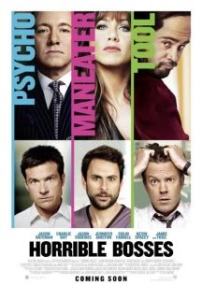 So this movie probably is no longer in theaters, but when me and my roomie all the way out there in London (this is a shout out E. Miss you.) caught this movie in theaters, it was in its 6th week showing. I think that itself says a lot about just how good this movie is. Plus the aged ticket vendor woman who told us this adult movie full of swearing, drugs, and new age humor for the 20 year olds was “funny as poop.” So yeah, I had to check out this movie. I mean, come on, Jason Bateman and Charlie Day in the same film? Perfect. This was a movie worthy of its under-hype, so to speak.

In this film of every Average Joe’s fantasy, three friends Nick 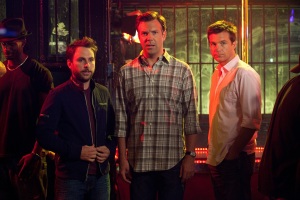 (Jason Bateman), Dale (Charlie Day), and Kurt (Jason Sudeikis) all hate and want to kill their bosses. Nick’s boss is a psychopathic withdrawing bastard (Kevin Spacey) who forces Nick to stay late, work often, and never give him that sought after promotion. Dale’s boss is ironically a maneating sex addict (Jennifer Anisten) who just wants Dale, despite knowing full well that he’s engaged to marry. And Kurt’s boss, the toolish son of the former boss who kicks the bucket and takes over by default (Colin Farrell). With this trio of terror, the boys just don’t know what to do to rid themselves of these terrible bosses with a job market where there’s no chance of redemption.

Until one day, Mutherf@#$er Jones (Jamie Foxx) stumbles upon them. And by that, I mean Nick and the gang to rovin’ around in a black neighborhood and stumble upon one mean Jones who’s willing to help them get rid of their bosses for a small fee.  And what does he do? He becomes their “murder consultant,” and helps them to kill each other’s bosses. What transpires is one of the funniest series of events that I’ve ever seen on film in the last 5 years. Other than 30 Minutes or Less, and that review will be coming shortly.

The good and bad. This film was shorter than I wanted it to be. This film needed to be longer. This 98 minute film could’ve been fleshed out to a 2 hour movie and I wouldn’t have complained for a second. There’s always more comedy that can be shoved into a film, and this movie could’ve used it for the full $10 movie theaters are charging now. Other than that, maybe Jason Sudeikis wasn’t the best SNL choice to go with in this film. I didn’t mind him, but at the same time, I didn’t really notice if he was funny at all.

It was mostly on Jason Bateman and Charlie Day, coupled with Colin Farrell’s hilarious scenes of

These 3 brought the house down.

cocaine and Kung Fu, that brought the brunt of the comedy in this film. I love the way in which Farrell can make fun of himself and not always go for the better roles that cast him in a better light (I’m just glad he doesn’t do movie like Alexander anymore…). But yes, Jason Bateman performs in his prime (Arrested Development level) and I’m happy to see he’s really putting work in this year with The Change Up and an Arrested Development movie in the works.

Charlie Day. Thank you for living.

Charlie Day. What is there to say about Charlie, member of one of the greatest trios to ever grace cable television on Always Sunny in Philadelphia. His signature character of the bumbling idiot shines through again in a Hollywood blockbuster meant for his caliber of acting skills. I know it may seem that Charlie Day will be typecast forever, but I could care less. His fantastic attitude and demeanor as a character actor could be the same in 1000 films and I’d watch every one.

Kevin Spacey gives a great dickish performance, in coupling with Jennifer Anisten trying on some level to reclaim some never found sex idol roles in this film. Sure she looks nothing like her normal self in this movie, but

Let the On Star begin.

damnnnn. Wow. With some great On Star humor and some great banter between Jason, Jason, and Charlie, this movie performs on par with The 40 Year Old Virgin, #1 in my favorite comedies of all time. (Since then Judd Apatow has never made another funny movie.) I give credit to Seth Gordon in this breakout directing “debut”. His work on The Office, Modern Family, and Parks and Recreation gave him some experience going into a full length Hollywood film. And definite props to Michael Markowitz and John Francis Daley (among others) for great dialogue between three great characters. 8.8 out of 10.