Bleach: Shounen on a Giant Scale

With the new circuit of conventions on the East Coast comes a new batch of cosplays to plan. And what caught my eye this summer, as my girlfriend suggested was Sosuke Aizen, main antagonist of the hit shounen series (still running) Bleach from Japan. (As all anime are usually from  there.) Not knowing a thing about the character I would attempt to portray, I thought, heck, let me take a stab at watching some Bleach. I had no idea what was in store for me for the next 5 weeks. With incredibly long battle scenes of at least 2-3 episodes in length, filler SEASONS and the occaisonal humorous episode, this show throws a lot at you in what I

feel is a reasonably paced amount of time. And the more you watch, the more you feel for certain characters and the more you feel like talking about it all the time (I wish I had a Bleach buddy to discuss the finer things with…). With such a cult following (very similar to Naruto) Bleach has become a staple I feel any anime fan should at least tune into every once in a while. 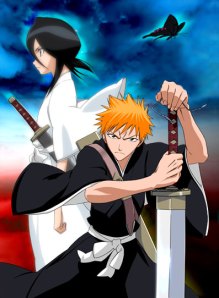 So I’m not going to delve to deeply into the story, so I’ll keep it restricted to the first couple of seasons. I already ruined one spoiler for you, so I hope it doesn’t deter you from watching at all. Ichigo Kurosaki is a typical 15 year old high schooler. Well, almost. He has the ability to see spirits that haven’t crossed over and he doesn’t really know why. But this hypersensitive awareness to the Other has caused him a bit of trouble. Which turns into a lot of trouble. That he may inevitably face for the rest of his life.

One day, while walking home from school (insert whistling skip here), Ichigo encounters something he’s never seen before. (Which, based on how often it happens in his hometown of Karakura Town, I’m surprised he hasn’t seen it before…) Rukia Kuchiki, a black robed Shinigami Soul Reaper is battling what appears to be a skull-masked monster. After a few episodes, in her weakened state, she can no longer battle and lends almost all of her power to Ichigo. In a sudden flash and transformation, Ichigo is transformed into a Soul Reaper himself and embarks on countless adventures of struggle and strife.

Due to Ichigo’s acquirement of Rukia’s powers, Rukia is taken prisoner by her

brother Byakuya Kuchiki and Renji Abari, and sentenced to death. Ichigo and his friends, Orihime Inoue, Yatsutora Sado, and Uryu Ishida, must all band together and reach the Soul Society, afterworld in which the 13 Court Guard Squads reign supreme over all souls and the dealings with the Hollows. (Hollows end up being a main form of opponent of Ichigo in the first and successive seasons, just in different forms.)

Ichigo fights to save Rukia!

After coming to and entering the Soul Society’s inner chamber, known as the Seireitei, Ichigo and Co. must battle hordes of Soul Reapers, both weak and powerful. Beginning his own path to strength, it is with and against the Soul Society and the Court Guard Squads that Ichigo finds his place in such a new world. With new enemies and challenges that seem to pop up out of nowhere as the seasons go, it may seem (as Ichigo’s voice actor said reluctantly, yet happily, that the show may never end, but at least he’ll continue to get paid for it.) 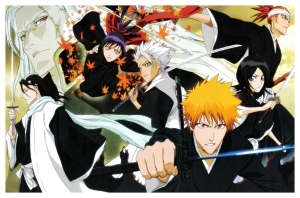 An immense amount of badasses.

All-in-all, with such an expansive cast with so many characters, this show is unbelievably immense in its scope and plot. And it’s mainly due to the writing and characters behind it. Although many fans may think the show should’ve ended long ago, I’ll have to see once I get farther (I’m on episode 212.). But there needs to be a lot of credit given to the vocal cast of this show. This show, although it would be just fine subbed, may credit it’s American fan base success to Johnny Yong Bosch, voice of Ichigo Kurosaki, our hero. With his deeply troubled teen facing a whole lot of changes in life way beyond that of anyone else due to its mythical quality, Bosch adds an at times playful yet at most times serious voice to a complex character.

Seeing as there are so many characters, I can’t really give credit to all those who lends their great voices to the show. So, for starters, Derek Stephen Prince is owed some credit for his snarky, unabashed portrayal of Uryu Ishida, the 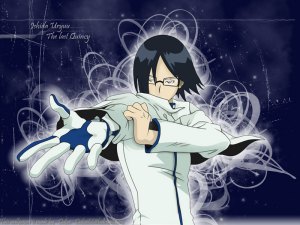 last of the Quincies. And, although he may not speak much, Jamieson Price gives a greatly underappreciated voice as Yatsutora Sado, the deeply softspoken Hispanic wonder. Gin Ichimaru, voiced by Doug Erholtz, is another voice that stood out to me with its snake-like charm and venomous words as another worthy opponent. Karen Strassman gave a semi-heartbreaking performance as Momo Hinamori, the lieutenant of Sosuke Aizen (voiced by Kyle Herbert), a woman in love with duty and the will to follow. Byakuya Kuchiki is amazingly voiced by a badass, Dan Woren. His I-don’t-give-a-shit attitude really shines through with that heart of gold underneath with

Woren’s voice. David Lodge, a voice actor I’m not that familiar with, adds a new voice I haven’t heard before with the grave undertones of Kenpachi Zaraki. And last but certainly not least comes Liam O’Brien. His amazingly recognizable voice lends itself perfectly to the soft spoken Jushiro Ukitake. And that’s only to name a few. After a while, characters voices become synonymous with the character portrayed on screen in perfect sychronization.

Now, the animation is the good and bad thing about this show. As it progresses, through the past few years, it has gotten better. It’s never been completely terrible, but I admire and try to find anime that have a more fluid style to their action scenes. This show has improved, but I find there are more stationary shots dealing with dialogue and explosions than actual fluid swordfights. Although a part of this show deals with powers and sword attacks not in the short term, there is an element of strategy among the characters I can admire. 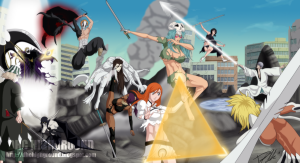 Something to look forward to in Bleach.

Apart from being in the top 10 longest running anime, it would be nice to see this show concluded in a way that won’t have been conceived out of a sense of pressure due to its length. I would rather have a harmonious ending with all the seasons fitting together in what becomes a well planned final battle between the characters that matter. Also, I wouldn’t mind if some of the main good guys perished every once in a while, it seems like (with most anime of this style) that no main characters ever die. It might add an element of drama not before captured in this show. Just a thought.