Let me start off my saying this series did do me head in. I’ve learned after a second trip with Karl Pilkington around the world, that you can do a load of amazing things in less than a year (proper funding needed, of course). But if a major programming station is footing the bill and your friends find you some wild experiences, go with it. Karl may think he hasn’t changed, but you can tell right from the get go, he’s a lovable guy who’s just like me. (Back to that later.)

In Series 2, we follow Karl’s choices off a huge generated list of “kick the bucket” like wishful experiences before you die. And even though he may choose things like Whale Watching and Desert Island, we know that isn’t all

Karl and some good ole Americana.

Ricky Gervais and Stephen Merchant have in store for him. He may eventually get to “swim with the dolphins,” but he has to travel Thailand and be dressed up as a ladyboy before he even steps foot in the water in Australia. I laughed right along with Ricky Gervais in part two of the most expensive prank ever. 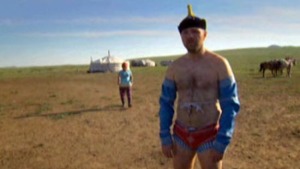 But I was a bit more proud of Karl this time for sticking up for what he wanted to do. He refused the bungee jump, as I would have. But, along with the bucket list things he did, he got expenses paid trips to Japan and Thailand. Ever since I discovered the wonder that is Thai cinema, I have been dying to go over there. Please Sky 1, pick me up as a travel host and transport me over there! But Karl pulled it all of in stride. If someone that stubborn can make it in Japan or Thailand and still do amazing things, sign me up.

I loved the little breaks Karl took during his work over in other countries. That is to say that the English speaking countries weren’t as fun because he wasn’t dictating the conversation or speaking for the locals in a hilarious way. He went to a cheap Ugandan flea market before seeing the gorillas. And he took his time there as well. Whenever there was an opportunity to jump in and dance someplace, Karl took it

The face of a scared man.

immediately. He may seem daft and apelike, but that man can light up a room with his goofy dancing.

And what’s to make it better than that Karl ends the show on a touching note. He has his revelation on Mt. Fuji, but Gervais and Merchant just knock it down. I, over the course of this show, have come to love and respect Karl Pilkington. I find his insights to be funny and all of his scenario situations are exemplary and logic (to a point). When I travel over to the UK someday, I’m not gonna wanna go running and looking for Clive Owen or Emma Watson. I’m going to find the nearest info booth and look at the worker and say, “Right, where do I find Karl Pilkington?” No joke, I want to sit down with this man and become his friend.

Only one of those is true… Karl.

Why would I say that about a dull, homely man like Karl? Because I am a dull, homely man like Karl. I don’t enjoy traveling or big crowds. I don’t like trying new foods or doing anything I know I will fail at no matter what. And I want to meet a man who can inspire me to do it by saying, “Look, we’re about the same right? If I can do it, so can you.” And I believe meeting Karl Pilkington, of all people, can make that happen. You hear me, UK? When this whole college thing is done, I’m comin’.

So I think it says loads about what I thought of the show and the content of what Karl Pilkington is as a person to say I want to meet him first and foremost. The show is entertaining and eye opening, funny, and extremely witty coming from a person

Don’t all British mind like a bit of drag?

everyone calls a div. To say I wouldn’t mind being Karl Pilkington is no stretch of the goal I could reach for. I even hear his voice in me head now. What a mental thing that is. Well, add that to me bucket list, meeting Karl Pilkington. Cause this show and the series as a whole (including Karl) deserve a 10 out of 10.