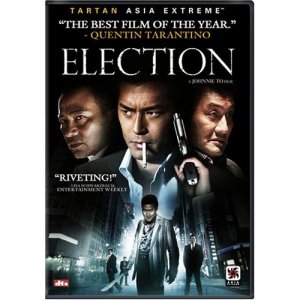 After a long hiatus, I’m back with a vengeance (hopefully) after some getting back into the swing of things here at college. This is my senior year, and this blog better take off, or I’m gonna be an English major out roaming the streets like a drifter. That’s kind of a joke and kind of not… Anyways…

I don’t remember this movie that clearly, but if I watched it, I like to give a little bit of an impression on it. From what I remember, Election is a Chinese movie about the election of a gang member to lead a sect of the Triads. It’s Lok (Simon Yam) versus Big D (Tony Leung Ka-Fai), and the stakes are high. The old ass bastards of the Triads select the member to lead the gang for two years, and the world is a changing. With Lok’s commitment to hard work and Big D’s commitment to bribes, it all comes down to who sides with who.

There’s some inter-gang fighting, some martial arts, and a whole lot of dramatic dialogue (from what I remember). The movie was a bit dark, but certain parts lagged when it came to moving the film along. It really didn’t stand out to me, and that’s probably why it hasn’t stuck in my head these last two months. I’ll probably just leave it at that. It premiered at the Cannes Film Festival, and I’m sure it was a good movie, as most foreign films are. The ending was memorable, and it was cool to see a foreign perspective on the Triads instead of an American one.