The Next Three Days

This is one of those movies I had never heard anything about when it was first released, and became pleasantly surprised when I finally watched it. Russell Crowe is usually always a solid actor for me. A Beautiful Mind, Cinderella Man, Body of Lies, etc. He always comes across as clutch. So why would I have not checked out this great little thriller flick about a desperate man/dad trying to break his wife out of jail? The premise may be a little bit 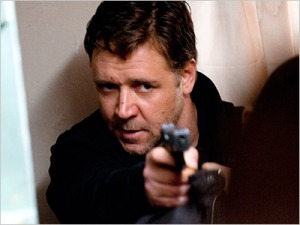 An actor of ballin’ proportions.

unbelievable, but I always like to believe in a little bit of luck and a stroke of genius.

So the movie starts out on a pretty iffy note. A cat fight between working women. Elizabeth Banks plays Russel Crowe’s wife in this one, Lara Brennan. John Brennan is a well to do educator at a local school (or college, something or other) and loves his wife very much. But she appears to be a bit of a hothead. Arguing about boobs and whatnot, the night ends on a sour note. After the next day and some hours of work later, Elizabeth Banks returns home, finding some suspicious blood on her trench coat. Minutes later she is arrested by the police and charged with the murder of her boss. The hinging evidence on her conviction? A popped button on the “supposed other killer’s” jacket.

A happy family (without Ty Simpkins).

The years start to pass and John and his son Luke (Ty Simpkins) must cope without a wife and mother. Luke seems not to care and dumb old Elizabeth Banks seems tired and can’t even get an appeal. Even with Daniel Stern as your lawyer, Russell Crowe can’t catch a break. So he decides to do the unthinkable. Break his wife out of jail in an ingenious way. With some help from the great convict cameo by Liam Neeson, Russell Crowe has mere minutes to break his wife out and get out of the country. Can he do it?

Obviously I’m not gonna tell you the ending. But Russell Crowe is a straight boss in this film, as his ridiculous commitment to acting

A great scene a la The Fugitive. Looks like Banksy is a little worried about her acting career…

always shines in all his films. Elizabeth Banks, I could go without her being in any other movies. Her blonde and semi-intelligent facade is stellar-ly annoying and without question one of my least favorite actresses. It’s a good thing she’s in jail for most of this movie, because she has next to no screen time. Perfect. Ty Simpkins breaks onto the screen as the catatonic wonder, just as he did in Insidious. That kid could get any job… as a coma victim.

What I liked about this film? The preparation and plot that went into the execution of this film. It’s not really geared around action and drama, it’s more about the cold calculation that goes into doing such a risky thing. He’s almost caught multiple times and he even throws up because of how scared and nervous he is. He’s an average Joe and it

Liam Neeson, talking about breaking out of jail… and finding his daughter… and training Batman… and punching wolves…

shows in his frailty. But he’s a smart guy. And what I loved is that he used research and even Youtube to do some serious damage in the breakout department.

The acting across the board is pretty good in this film. Russell Crowe, ballin’. Elizabeth Banks, regrettable. Ty Simpkins, coma. Liam Neeson, badass as per usual since Taken. They even gave some opportunity to a deaf man who can ride a motorcycle like a boss. One thing that baffles me though is the repeated use of Olivia Wilde. She seems like a beautiful and kind person, but… what the hell? That woman has no remarkable acting skills. Dat shizz needs to stop, and now. I don’t like movies that use eye candy as a selling point. (Ahem *every Megan Fox film ever created* Cough) Oh well…

I tried to believe the situation despite the extenuating circumstances, and it still comes out to be a pretty solidly entertaining film. It didn’t

Could you leave your child at a gas station? All catatonic and whatnot?

do that well by critics’ standards, but to hell with professionally paid critics. I feel like most critics (older people than me, of course) have lost touch with what makes a successful and entertaining film these days. And with a Hollywood machine that makes things for profit, I can say without a doubt that the “art of film” is dead and really never was a factor in my lifetime. I know it’s harsh and critical of me to say, but that’s just how I view films. I am a pretty jaded person about the whole thing, I guess. But I love films anyways. Judge me if you want, let me know.

So I think of The Next Three Days as one of those films you show to new groups of friends every once in a while. It’s a thrill ride with well thought out planning and has a semi-satisfying ending. Comment on what you think about this post, but I’ll give Russell and his ballin’ acting in this one a 8.1 out of 10. 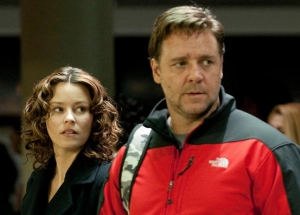