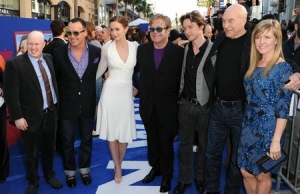 So there are very few reasons why this movie was at least decent. But the biggest reason this film flopped, straight up, is Jack Black. His atrocious act of not acting is what plain and simple killed this movie. It might’ve had a chance at being a decent children’s film if it had been any other comedic actor. Hell, Paul Rudd (my favorite comedic actor) would’ve made me buy this film before I watched it. It would be more 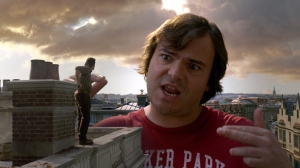 entertaining with Cedric the Entertainer. I think this was Jack Black’s attempt to make a bit more bank on another terrible children’s film. I dread the day that Kung Fu Panda 2 comes out. And that’s soon. Ugh.

Besides Jack Black, there were some decent actors in this film. Jason Segel pulled off a more than decent English accent, which I commend highly. He is, I would say, one out of three actors that made this film okay. (It was only 85 minutes long, but any scene of Jack Black alone was agony.) Emily Blunt 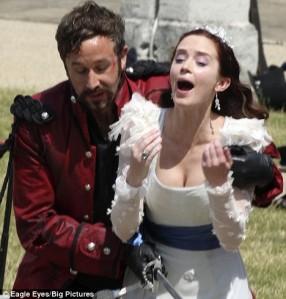 You capture that Princess, Chris O'Dowd. You rule.

was quite beautiful and charming in this film, and, not having seen a lot of her films, this movie didn’t destroy her career. And, most importantly, Chris O’Dowd of The IT Crowd was in this film. He is, quite literally, the backbone of comedy in this film. He had more comedy in his moustache in this film than Jack Black had in his entire, gelatinous body. (And he was 100 times their size.) He was cynical, and always in the position of protagonist, and it worked out great for him. I’ve never seen him in a villainous role, but this was great. He keeps getting better.

Okay, now I should probably fill you in on the plot. Lemuel Gulliver (Jack Black) is a mail room clerk who wants to impress an editor at his work, Darcy (Amanda Peet). In order to do so, he fakes a travel piece, and then travels to the Bermuda Triangle to do a piece on the area. He is sucked into a reverse whirlpool and lands in Lilyput, the island of the small people. There he meets Princess Mary (Emily Blunt), her soon to be husband General Edward (Chris O’Dowd) and her father, King Theodore (Billy Connolly). He’s imprisoned, released, and saves the town with the help of fellow small person and Princess Mary’s true love, Horatio (Jason Segel). And that’s basically it.

Wedgie the shizz out of that waste of time actor.

I give this movie credit for one thing besides the supporting cast. The effects. In whatever way they had Jack Black interact with the small people, it looked spot on realistic. The interactions looked real, I mean. The tiny sets meshed perfectly with the close up shots on the smaller characters and the set uses were interesting. So I give the special effects crew a lot of credit for really creating a backbone for some of the comedy. (i.e. Urine fire) So, accompany that with a great performance from Chris O’Dowd and you have yourself a barely B-rated kid’s comedy. 4.4 out of 10.

It’s been a solid week since the last post and I’m ready to get back into it after a great spring break. Speaking of spring break, I saw The Adjustment Bureau over break. Let me tell you, it did not disappoint.

This movie is coming from first time director, second time producer, and fifth time screenplay, George Nolfi. Not familiar? Well, this guy is a pro with Matt Damon. He’s written the screenplay for three of Damon’s movies now. (Besides Adjustment, he’s done Ocean’s Twelve and The Bourne Ultimatum. Great stuff.) With all this work with Matt Damon, why wouldn’t Nolfi choose Damon for this movie? Besides Matt Damon’s acting chops, he can pull off the occasional (more than that) move in any of his movies nowadays.

This movie is quite great. If I had to compare it to anything, I would call it a more realistic version of Inception, with quite the romance on our hands. David Norris (Matt Damon) is a hood thug turned politician running for senate and seemingly winning. After a scandal, Norris decides to throw in the towel and take a job at a big company instead. And all this after meeting a girl, Elise (Emily Blunt). Months pass and Norris and Elise happen to run into each other on a bus. But was it just chance? Or are there bigger powers at work here?

David and Elise are tossed into a wild chase involving the aptly named “Adjustment Bureau,” giving rise to the question of whether or not we’re actually in control of our own lives. I would beg to differ and argue that some people are destroyed by their fate, but that’s a whole different story.

Okay, so what stood out to me in this movie is the tastefully done special effects, intermingled with great cinematography. The effects aren’t too flashy and all up in yo’ face, they stand respectfully  behind the cinematography, as should be expected. With this base, we have on top of that some great acting. Of course, Matt Damon, Emily Blunt. But the two who really sold it for me was Anthony Mackie and John Slattery. Slattery of course gets his acting chops from Mad Men, but what surprised me in this movie is how y0u’re not really supposed to like him, but he still comes off as that cool customer you wish you could be. In direct opposition to him is Anthony Mackie, another Adjustment Bureau agent who has followed Damon throughout his life. Looking back on his career, I’m surprised I’ve missed Mackie, but now I’m sure I’m going to go back and check him out. (i.e. Notorious as Tupac, The Hurt Locker, Freedomland, and Half Nelson.) He’s been doing great work since about 2002, and it’s always great to find those actors who fly below the radar.

Only problem with this movie? TERENCE STAMP. Hollywood has got to stop letting this guy act. Seriously? He takes the most random roles that forces me not to be able to take him seriously. Come on. Yes Man? No sir.

This movie is a good one. With a great script, good direction, and great acting, this movie was made to do well. It leaves you with a great message in a not so familiar way. But you do have to ask yourself, would I change my fate for love? 7.7 out of 10.