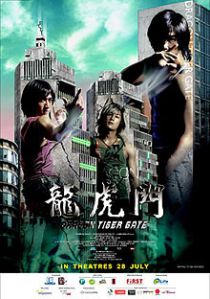 All hail the great and mighty Donnie Yen! All become confused by the content of Dragon Tiger Gate! This film had a whole lotta promise and became strange as it progressed. It almost feels like some strange live action tribute to an anime. Oh well, Donnie Yen is in it. In this film of a powerful martial arts dojo and the threat looming over them of an evil master fighter, a handful of scenes redeems what was otherwise a comedic endeavor.

The film centers around two brothers in combat, Dragon Wong (Donnie Yen) and Tiger Wong (Nicholas Tse). After a long history of brotherhood between the two as a couple of wig-haired ruffians, these two go on to bigger and better things, in opposite directions. Dragon becomes the hard brawler of the Triads and Tiger fights for the justice of their dojo, Dragon Tiger Gate. The two worlds collide when the two cross dukes in a restaurant when a deal goes horribly wrong. 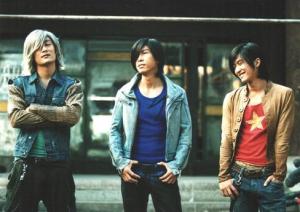 They have the same hair as children…

The gang is led by Ma Kun (Chen Kuan-tai), this old badass whose daughter and himself can send a softball yard with one swing. Connected to the Luocha cult, led by Shibumi (Louis Koo), it all starts with the exchanging of the Luocha plaque. And then all Hell breaks loose. From the very beginning, there is a shed of light. There are some big fights scenes with a lot of stunts and falls. It’s lookin’ ballin’s and fine. And then there’s some lulls in the action. And then a scene or two of fighting. And it goes this way for a while, culminating in the strangest of boss fights I’ve ever scene. But what can you expect from this anime/Dragonball Z inspired film? 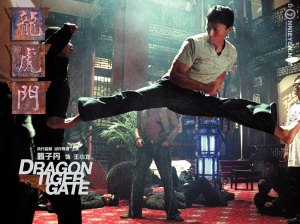 It’s disappointing to me that Netflix chooses not to show certain foreign films in their original language with subtitles. This is a movie that desperately needed the original voices to save it from the mockery it got in English. This film has some great locations and sets combined with a B-C rated plot, but it just becomes moderately laughable when its done in English. The voice actors (which, I think some of who are the original actors…) don’t have the ability to match the emotions of the character’s facial expressions and actions. It sends a shiver of shame down my spine.

I did like the three main characters though. There’s Dragon and Tiger, half brothers til the end. And my personal favorite, Turbo. Shawn Yue plays this supremely comedic action hero named Turbo who specializes in nun-chucks, is the weaker of the three, but he has all the heart in the world. The Asian version of Rudy. Master Wong may defeat him one too many times, but he vows to become a great warrior. There’s lots of defeat, a strange power gaining scene in this tall pagoda tower with anal beads and an old man, and some cheesy CG effects towards the end. 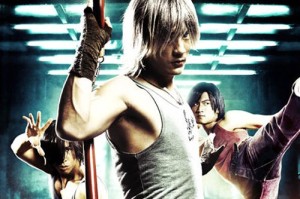 The movie ends worse than it began, but there’s a great use of weapons and martial arts skills. I was impressed with Donnie Yen’s stunt coordination and fight scenes, which was well worth the watch. I recommend the original version and avoid all the classic hilarity of a dubbed. All-in-all, it’s an entertaining dramatic martial arts film with a plot. Those are sorta rare, so check this one out. A decent 5.5 out of 10.