Before I start this review I have to admit that I check Wikipedia before I get too deep into a show. I wanna know the characters I’m looking out for and the basic premise before I dive in. I did this for Ga-Rei: Zero. And boy, was I surprised. There was no Kensuke Nimura (Todd Haberkorn). Although he was in the last minute of the last episode. Every other character was present in this anime, and I finally understood after all 12 episodes that this was a before the manga story that explained how the characters got to where they are. So much more sense now.

So thisstory is about Kagura Tsuchimiya (Leah Clark), a spirit hunter who fights off demons with her samurai blade. She is descended from spirit fighters like her parents and it is one day that her mother dies and passes on the family’s spirit, 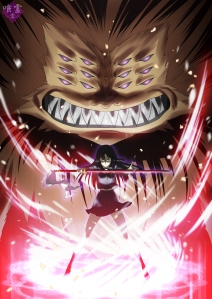 Ga-Rei Byakuei. Going to live with her family’s relative, Yomi Isayama (Alexis Tipton), she hopes to become stronger for her father, but not without resentment. Months pass as the two fight different level classifications of demons until one day everything goes wrong. And then that’s kinda where the anime ends. It’s left open ended for the manga arc to pick up where this built upon, but who knows?

The fighting in this show is rather bloody and intense, quite interesting to see for me not having watched many shounen (is that what this is?) with female protagonists. It just gives credence to the idea that girls can kick just as much ass when it comes to shows like this. (They really are the dominating forces in this one.) The subject matter is rather dark, owing to the fact that nothing good comes out of this situation. I mean shoot, the first episode establishes a group of characters you expect to follow the entire show and then subsequently eliminates them with Yomi. Pretty redonkulous.

Other than that, it was a decent show for its brevity and promises of a continuation. The voice acting was decent from a group of as not well known voice actors from Funimation. I was really happy for the establishment and buildup with a new, interesting way of looking at the spiritual side to “exorcism”/demon fighting in anime, which I always appreciate (although I’m a huge fan of Bleach and am excited for the new season dubbed). I can’t say enough that I liked this show and hope for a continuation visually.  I’d give this show a solid 7.5 out of 10.