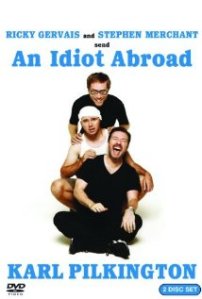 … Or as Karl Pilkington would’ve liked to call it, “Karl Pilkington and the Seven Wonders”. Either way, executive producers Ricky Gervais (star and creator of UK’s The Office) and Stephen Merchant (co-creator of The Office), along with Sky1 programming, made this an experience that Karl would never forget. In 7 episodes (and a hindsight 8th episode), Karl Pilkington visits the seven wonders of the ancient world. What happens in the meanwhile makes all the comedy.

I love Ricky Gervais’s idea for this show. He calls it “the most expensive prank on national television”. He wants to throw Karl out of his comfort zone and make him do 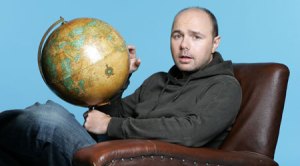 This… is Karl Pilkington.

terribly uncomfortable and wacky things he would never do. If Karl brings something up (like rather living in a cave than in a nice house so he can see the nice house) they do that. His sometimes backwards and small minded opinions on the world come out constantly and he must deal with those consequences. 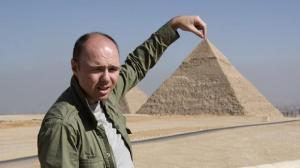 That’s what I loved about this travel documentary. Karl is constantly talking. (He says he hates noise, but a lot of it is coming from him.) He complains, in a very comedic way, although he may not know it, and has this constant set of stand up comedian like scenarios and jokes when he talks about native cultures. He won’t try any foods (sensitive gag reflex, he says) and his three favorite phrases are: 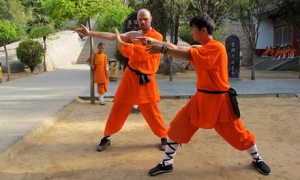 A little bit jealous of the Shaolin Wushu…

He is unabashedly forward with people and, for some, that may come off as insensitive and stupid. For me, it was comedic timing and forward humor at its best. He has this insane amount of diction in his head that he can apply to any situation in order to describe it to another layperson such as himself. He is thoroughly unimpressed by every wonder (“It’s alright…”) and finds any way to use Sky1’s money in order to relax when he can.

But that’s where that stops. Gervais and Merchant are constantly calling Karl up in order to get him to do funny things for the camera. He awkwardly rides a camel, wrestles with pro wrestlers in Mexico, is unwittingly asked to stay with a gay crossdresser in Brazil, and is 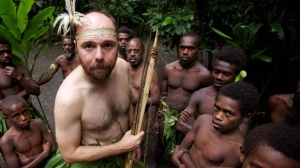 Like a needle in a haystack…. (Preview of Series 2…)

always being pushed to live in terrible hotels and hostels. Seeing Karl as “the kid crying in the corner getting poked with the stick,” really is enjoyable television. I do feel bad for him sometimes though… 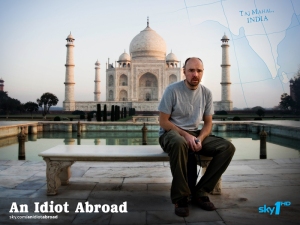 Is he truly an idiot? That face kinda says so…

Either way, Karl Pilkington gets to do some incredible things and see some incredible sights. He showed me, and all the other thousands of viewers who have watched him, how to rough it in other countries and where/what to steer clear of. Karl goes well beyond my own comfort zone and travels and does things I would never enjoy doing. If I had the opportunities he had, there would still be no show. So I salute you, Mr. Pilkington, for doing what Ricky Gervais and Stephen Merchant made fun of you for. Now, on to Series 2: The Bucket List of Karl Pilkington! 8 out of 10.