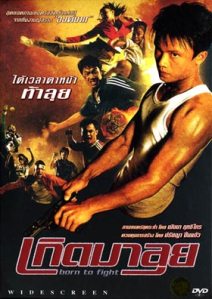 So there’s this guy. Dan Chupong. And he’s pretty good at Muay-Thai boxing. He’s been in a few films and definitely poses a threat to Tony Jaa. Interesting? ou bet he is. Like his fellow Muay-Thai fighter, Dan Chupong changed his first name for a more international appeal and should be hitting it big any day now. Little known fact, he was in Ong Bak 2 and 3 as Tony Jaa’s main antagonist, the crow creature/master fighter (?). But not to be outdone by Tony, Dan Chupong has begun his own career in the action film business in Thailand. His first big hit? Born to Fight.

So, in this film, Deaw (Dan Chupong) is a policeman, investigating a illegal trading syndicate headed by General Jang Sei 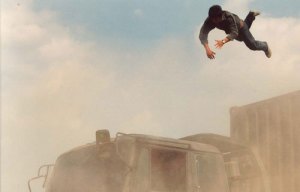 This could be... painful.

Yang (Nappon Gomarachun). In the ensuing fight, Deaw’s partner, Lowfei (Santisuk Promsiri) is killed and Deaw swears revenge against the evil General, who is subsequently arrested and placed in a high security jail.

Years later, Deaw has decided to accompany his sister and her olympic team of Thailand to a small village to help relieve their poverty and poor livings. All seems well (and the creepy dad of one of the girls completely agrees) until SUDDENLY… A militant terrorist group swarms into the small village (of all the damn villages) and begins mercilessly destroying the villagers, men, women, and children alike. Once they’ve done slayed about half the villagers, they round up the rest, excluding Deaw, into the center of the village. Their reasoning? They want the general released in exchange for the villagers. Fair trade? Dan Chupong would beg to differ. 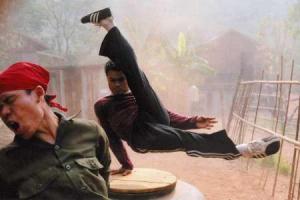 Ever think you'd see an ass-kicking this way?

And from this point on, a bunch of olympic athletes, along with Deaw, begin to work and twirk every. last. soldier. At this point it’s guns versus buns (of steel) and you know the soldiers stand no chance. If this movie speaks to any horrific disaster of the last 50 years, this movie says that ordinary people can destroy the shit out of any armed and dangerous terrorist group that makes the mistake of attempting to invade their shanty town. And with what you may ask? The natural landscape of rubbery tin roofs, hardened wicker balls of steel, and a plethora of soccer balls kicked yards away with deadly 3-D accuracy.

What is nice about this movie is that Dan Chupong isn’t the main stunt actor in this battle of sports. Although he lays low with the village idiot who is a master of California Knockout, he obtains some guns. Which, in fact, is this movie’s letdown. Tony Jaa doesn’t need guns. Dan Chupong does. Is that cheap? Well, Dan is his own man, and can decide if he wants to be unfair for himself. But I have to give him credit, he can really use a gun with supernatural deadly accuracy.

But yes, the stunts are good and real (as Panna Rittikrai shows at the end of every film, his stunt actors getting rather horridly injured) and the action is intense, although the special effects may lack that pizzaz. I gotta say that nuke is rather a bust. But, other than that, there is some actually decent acting from the 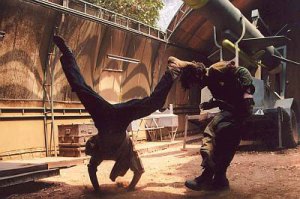 It just. gets. insane.

villagers that inspires true tears, or, at least, with me. That is definitely something lacking in Tony Jaa’s films, other than Jaa himself. He is a regular Greg Kinnear. With a jam packed action scene once all the plot has been laid out and all seems lost, then this movie is really worth the watch. And guess what? Another Dan Chupong review is on the way. 7.5 out of 10.