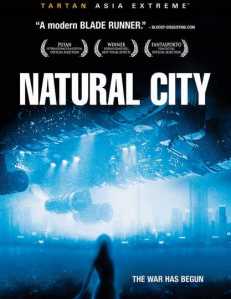 I really didn’t know what to expect when I started watching this movie. What I wasn’t expecting was the formulaic Korean drama. What do I mean by that? Simple.

A Korean drama is one in which a couple in love usually has one of the lovers die in a horrendously heart wrenching way. This leaves the other lover alone to mourn and deal with all their feelings. This is a sci-fi film about cyborgs, androids, and

The picturesque cityscape really stands out in this film.

humans and a plot to bring down the futuristic city from within. I had no idea the Koreans could incorporate such a soap opera-y plot into such a steampunk film. Good on ’em for that one.

So “R” (Yoo Ji-tae) is a policeman in a futuristic society in which people can’t tell humans apart from androids and cyborgs. There’s a distinct difference though. Androids were never human; cyborgs have been outfitted with a cybernetic chip that controls and

Blood and love. All in one.

helps them function. R is one of those rogue cops who never follows the rules and does his own kickass thing. After botching up a destruction mission at a local processing plant, R must reconcile with the consequences.

R has fallen in love with a table dancing cyborg. Ria (Seo Lin) has but a few days left to live, and this film follows R’s decisions into how to save her from decimation. He finds salvation in an orphaned prostitute named Cyon (Lee Jae-eun), and finds that her existence is also in the interest of the androids attempting to use human DNA for some nefarious purpose. With the strange Cypher (Jeong Doo-hong) on the loose, R and the police force must find their own means to an end.

The look and feel of the film is very 1980’s Bladerunner feel. Yoo Ji-tae functions as a suave and gritty Harrison Ford,

Damn it, gotta love those views.

patrolling the streets for his own personal gain. There’s not much to speak of with character development on the side of the androids or cyborgs, but the presence of these untraceable electronic beings is a frightening concept. They can knock a man’s leg clean off with one punch for God sakes! Never thought I’d see that kind of special effect in my life. 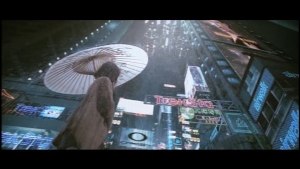 Tell me that’s not Bladerunner, right?

The guns are clunky, the special effects and digital graphics are dated (even for 2003), but I liked the storyline all the same. It was more of an artsy film than anything else, and it was all about the feels. The emotional range required for understanding this movie from start to finish is not for the weak willed. It has undertones of dystopian elements, and questions just exactly what it means to be human. The ending is long and tragic, and is obviously created to pull at the heartstrings of those who watch it. It got me there towards the end, and I’d love to know what other people thought of it who saw it. Good or not? Let me know!

I’ve always liked Yoo Ji-tae (I hope I’m not spelling that incorrectly…) since I saw him in Oldboy, and I find his acting

A bit of fighting for the action fans.

style to be brutal at the same time that he is a fragile human being, just like the rest of us. This pretty boy can pack a punch with his acting, and I’d advise watching out. He just might lay you out on your back. 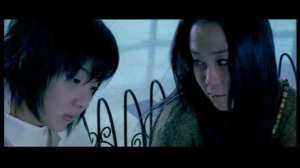 There’s no true way to describe what/how to take anything away from this movie. It’s one of those seeing and believing situations where you just have to watch it and attempt to understand what the movie is throwing at you. I’m not entirely sure what I was shown in this movie and if I even got it. So just check it out for yourself, especially if you’re always ready for a melodramatic cry. It’s a good one for that. 7.2 out of 10. 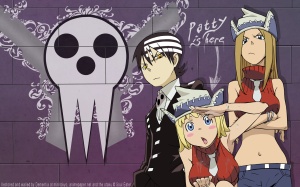