Higurashi When They Cry

I love horror movies. The guts and gore, the intense scenes of pain and suffering, even the intense sense of terror it all brings. No. I’m not a morbid person. I think quite highly of human life and its preservation. But I find that now, When They Cry holds a special place in my heart, right next to Saw.

This show, for lack of a better word, is intense. I’ve seen my fair share of anime by now that show the occasional spurt of blood. I’ve never seen an animated situation ever make me squirm though. (Watch the Eye Opening arc and you’ll know. Ha. Eye opening.) These characters, although most in their teens, are some twisted people, although for me, redonkulous at the same time. These characters plot out (and get away with) murders, brutal assaults, and even the occasional torture. But what kind of a reviewer would I be if I didn’t give some back story.

The whole story takes place in a small rural village known as Hinamizawa, the former site of a dam construction that would have taken over the entire town. But, in an odd series of events, all chalked up to the Oyashiro-sama Curse. This is the town’s savior and protector who wards away the demons and keeps the town safe. He’s quite the violent type who kills and spirits away though, all on the town’s only festival, the Cotton Drifting Festival. This story frames all the arcs of the series and lays the groundwork for an all too eerie storyline. 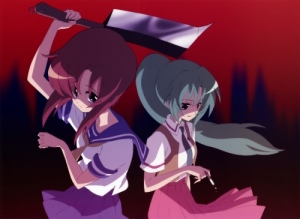 There are five main characters the develop the stories of each arc. All five of these character reside in a one classroom schoolhouse of 15 students. First we have Keiichi Maebara, the only of the boys who, for me, plays as the protagonist at least 50% of the time. He has just recently moved to Hinamizawa and usually finds that the village is messed up. There’s Rena Ryugu, the ditzy girl who’s in love with cuddly things. She literally thinks everything tiny and innocent is unbelievably adorable. There’s also Mion Sonozaki, the green haired dominatrix who runs the gaming club at her school. She’s quite the leader and does her utmost to please her family. Along with these three comes what I’d like to call the adorable double: Rika Furude and Satoko Houjou. These two lay waste to everything with their cuteness and great personalities. You could almost call these two half of a whole cuddly teddy bear.

First impressions. I had watched the first episode a while ago and thought, how is this show frightening? You don’t get any sense of foreboding out of any of this. Typical school-age anime. BUT NO. Now that it’s been months and I’ve picked it up again, it’s anything but. Every arc starts off with a cutesy, “relaxer” episode, followed by 4 or 5 episodes of paranoia and fear. The first arc, Spirited Away by the Demon, is my favorite. It mirrors most horror movies I’ve come to love. (i.e. Orphan. And don’t say that movie’s B.S., cause it isn’t.) It was fantastic. Every arc. About the arcs though. Every arc is either a question or an answer arc. One lays out a problem, and another arc, some of them are in the Kai season, answer it.

The anime started off as a video game. Awesome enough as that is. There you go, chew on that, savor it. Just imagine how amazing this video game must be. Well I read it. It’s a purely read and solve the mystery type game. Some people might like that. I also might at any point beat myself to death with my keyboard. Not my kinda game. But that’s for each person to decide.

The animation of the anime is quite good. The voice acting (subbed, not dubbed, mind you) is ridiculously fantastic. The screams and laughs are harsh and evil. Great combo. One arc, and I won’t say which, is just ridiculous. Most horrific thing in the entire first series. I almost felt as if it wasn’t one of those typical slash and hack horror rides. It was more one of those tastefully done twisted rides that doesn’t leave you hating everything at the end. (But I don’t have a preference as far as hack/slash vs twisted. I love Saw for its twisted mentality, but I love The Hills Have Eyes for its hack/slash approach. I digress.)  This series is worth the watch for its plot, its characters, and its mystery. At every point it’ll ask you to question what if? and who? and most definitely why? 8.4 out of 10.