This movie has been a personal favorite of mine. It’s touching and heartwarming nature, despite the context and parts of the film, have made it a classic since the day it came out (December of 1997 to be exact). Pulling off the feeling of being filmed at the time of the content’s occurrance, this atypical film about the Holocaust and its effect on a recently formed and loving family reshapes just exactly what the years of WWII were. And I would argue, for the purpose of this film at least, that despite all the death and destruction, there was an underlying element of hope.

There are two halves to this movie. Sorta like Hostel. Not one parts boobs and one part blood (not to degrade this film to a horror movie, as good as that horror movie may have been for the genre). This particular movie is one part love and whimsy and one part survival and protection. Directed, written, and starring who I would consider to be the

Greatest family of all time? Yes.

greatest foreign actor of all time, Roberto Benigni, comes a movie that holds within it just what it means to be a decent human being in a time of great struggle. Begnini plays Guido Orefice, a peasantly and pleasantly kind and funny man out to make his way in Italy. He finds love, adventure, and the courage to do for his son what I imagine would be the hardest thing on Earth. 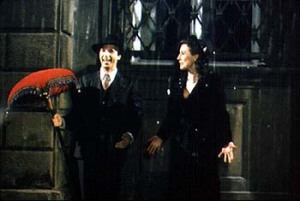 Let’s start with the beginning of the movie to keep it light. Guido comes to meet this beautiful girl while travelling with his friend. This brings about one of the greatest lines of all time. “Buongiorno Principessa!” Upon every time that Guido runs into the love of his life Dora (Nicoletta Braschi, his actual wife) he utters this phrase, surprising her and sweeping her off her feet with love. Eventually, through his slapstick-like antics, he goes out of his way to encounter Dora and steal her from the stiff and businesslike man who has been arranged to marry her. 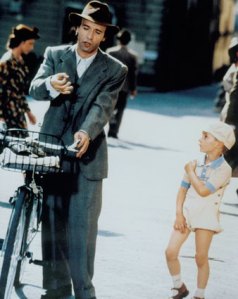 I have to say that I love these opening scenes in this movie. With the first 50 minutes of the film comes some of the best crafted scenes of chance and happenstance that I’ve seen in any similarly styled movie. Convincing an Italian government man to eat what someone else didn’t want, attending the school in which Dora works by impersonating that man, and mesmerising Dora with all the things that happen on their romantic date in the rain is just straight out of the older films of the 30’s, 40’s, and 50’s. By even evoking this style comes a sort of magic you wouldn’t expect from a movie of the 90’s.

And then comes the turn. Happily married, Guido, Dora, and their small

A father who will do anything for his son.

wonderful child Giosue (Joshua, performed by Giorgio Cantarini) live happily in a fantastic old mansion of Guido’s uncle’s. In the rising regime of the Italians comes Mussolini and his sympathies and alliances with Hitler. What does that mean exactly? That means the persecution of Jews. Guido, a Jew himself is hauled off one day with Giosue and his uncle. Being the person that he is and the fun and laughable father that every child would need at Giosue’s age, Guido comes up with the idea to shield his son from what is actually going on around him in the Italian Axis Nazi camp.

Throughout the second half of the movie, there is still humor. There is still love felt between Dora and Guido and the son they have raised. But there is a looming danger of death around any corner. Giosue must hide at all times from the German guards in order to avoid the gas chambers that eliminate the young and elderly. Guido must perform hard labor in the yards with next to no food, water, or rest. And yet, every day Guido comes to find some way to describe their experience in this concentration camp as a game. A game, that, if won, will bring the winner a tank. Through every loving action of his father, Giosue comes to realize, as an adult we never actually see, that his father made the ultimate sacrifice in order to save him and his mother.

This is wonderful to know. Life truly is beautiful.

With a heartbreakingly sad scene towards the end, you still see Guido shining until the very end. Guido and Giosue are never in pain, never upset, never crying or despairing over their situation. Despite what every viewer of this movie knows about the Holocaust and what could happen to any of these characters, you have this hope for them that they will make it out. And, if not, you realize just how amazing of a dad that Guido truly is. If I had to give him a level of Dad Points for this film, he would set the high for it. Let’s see:

In the course of this film he:

1. Finds love and creates a child.

2. Cares for that child so deeply that he will do anything in order to make his son’s life better and despair free.

3. Sacrifices his life in order to save his son’s and his wife’s.

4. His son remembers the sacrifice his father gave and is forever indebted to him.

5. Guido as a dad was just to legit to quit.

You bring together all of these elements and you have a Dad that gives a million and one percent. For sure. And, told in one of the most amazingly

heartfelt and romantic ways possible for any film of this genre, and you have made a classic ahead of its time. I am in love with this film. Its title truly does justice to what the aim of this film was. Life is Beautiful. So appreciate it while you have it and know that with the love and life you put into it, great things can come of it. 10 out of 10.