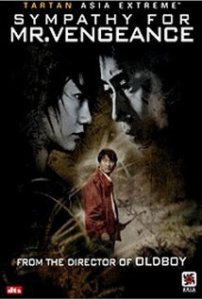 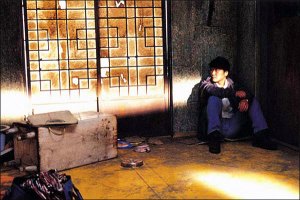 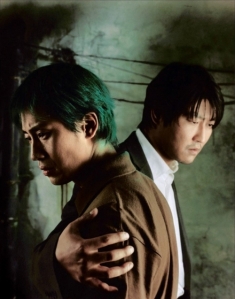 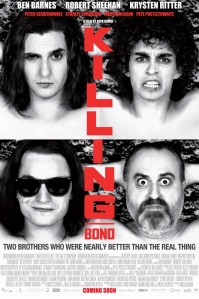 What would it have been like growing up living in the shadow of Bono and U2? Well Neil McCormick, author of Killing Bono: I was Bono’s Doppelganger knows exactly what that feels like. And his book turned out to be quite a good movie based on his experiences. With a huge interest in seeing Robert Sheehan in a role other than Misfits, I sat down to check out Killing Bono. In an odd turn of events, this is one of those films of one-upsmanship. I find McCormick’s character to be intriguing and tragic, especially with his circumstances and the adversity he faces. So let’s blast out to some U2… and Shook Up.

In the late 70’s, Paul Hewson, soon to be known as Bono (Martin McCann) and his friend David Evans (The Edge) would form a band that would sweep the world, in a similar fashion to The Beatles. Neil McCormick’s brother Ivan (Robert Sheehan) was recruited at first by Bono, but it was Neil’s (Ben Barnes) decision to keep him from the band. Holding this secret inside, Neil will do anything in his power to beat Bono and his fast rising star. With travels to England, a few 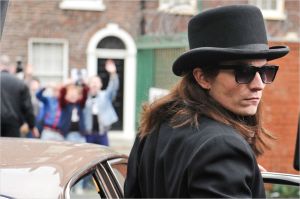 A little bit of Martin McCann as Bono.

relationships, and some fiddling around with record producers, It is up to Neil to prove to his brother and everyone that his mistakes were made for a reason.

And it’s a long journey from the bottom to the top (or as close as it gets). This movie has some twists and turns (on a downward spiral), and leaves you realizing that it doesn’t matter if Neil succeeds, it is up to him to do what he thinks is best for himself, and realize he cannot choose for others. He can only  be as good as he himself can be. Now there’s a bit of some moral wisdom to dish out at the end of a film. 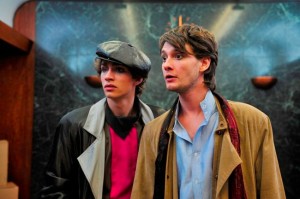 A little taste of the McCormick brothers!

I had only seen Ben Barnes in a few things before he burst onto the scene in this film. Stardust and Prince Caspian in the Narnia series to name the few. But this is one of those out there roles for Barnes. He’s all over the place, he’s ecstatic, he’s cocky and ready to roll at any moment. This is a hard role to pull off if you don’t have the personality for it, but Barnes does a good job of it. I wouldn’t have minded to see Robert Sheehan in the pivotal role, but this was all good all the same.

But my what a young actor Robert Sheehan is turning into in the world of movies. First there’s his strange appearance in Nic Cage’s Season of the Witch, and then followed by this movie? Soon he’ll make a name for himself as a period piece actor in the American film world. And I hope his unforgiving comedy will be able to come across the “big pond” in order to become a mainstay in America. I see big things for this young star, and I wish him the best. 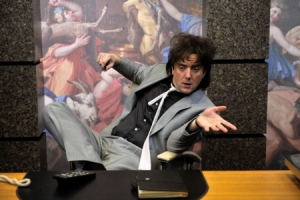 It is rather unfortunate that this is Pete Postlethwaite’s last performance before his death. This actor who I will always remember as the whimsical man who gave James the seeds that would send him on his journey in James and the Giant Peach. In this film, he’s a bit of a different character. Pete plays a garishly homosexual landlord with a penchant for large parties. Helping Neil and Ivan along the way in London, it is Pete who brings together Gloria (Krysten Ritter) and Neil as Karl, Gay Landlord Extraordinaire. 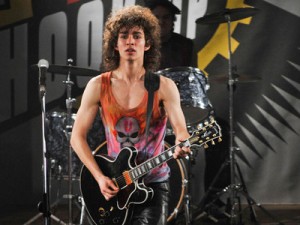 That’s some great hair there, Robert.

And you can’t forget Peter Serafinowicz as Hammond, the ridiculous record producer. First he was Pete, the dick roommate in Shaun of the Dead, but he has gone on to do some great T.V. work Look Around You and various other writing and starring in British television. He was the voice of Darth Maul for god sakes! What an accomplishment! This strangely wonderful man is just the kind of quirky actor this film needed.

Oh, and we have to talk about the soundtrack! This movie didn’t directly feature any U2 tracks, this features all original (or did Neil make it?) music for the film, or something or other. And I really enjoyed the music. Ben Barnes had a great musical performance and really captivated what it meant to be a popular band in the 1980’s. Couple this with a combo of darkish humor and drama, and you have a film about triumph and revenge. I’d give this film a watch for any U2 fans. 6.9 out of 10. 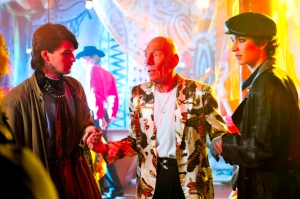 Let’s get some dark eyeliner on and hit up this club.