I am glad to hear the author of American Psycho, Bret Easton Ellis, disowned this film. This film is trash. Being a gigantic fan of Mary Harron’s American Psycho, I went into this one knowing it wasn’t going to be as good as the first. But I had to idea how bad this was going to be. I was in for 90 minutes of comedic pain. This movie does in fact shame Patrick Bateman and his legacy.

So what should I say about this movie? Well, Mila Kunis is average. I’ve never expected much out of her from any film, so I’m never disappointed. Oh well… As for playing the

psychotic main character who will ironically do anything to get into Quantico for criminal profiling? Oh how funny that is… When you see a movie and William Shatner is a better actor than a lot of the other people? That’s emotionally disturbing.

The plot. Rachel Newman (Mila Kunis) is taken on a special date with her babysitter. It’s Patrick Bateman, and you can bet it’s not Christian Bale. They got a toolish looking Cro-Magnon man to take the role of his stunt double or some shit. Rachel stabs him and this is the point that she decides she wants to kill other serial killers. What a rational and normal turning point for a 12 year old child. Let me also remind you the terror and gore in this movie is below par. Below humanly realistic levels. It’s SyFy $2,000 budget cheesy. Sickening in itself. 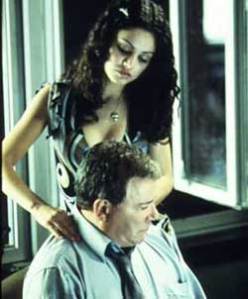 Giving the best actor in the film a back rub…

Now at a prestigious psychology school, Rachel plans to do anything to get to be Prof. Starkman’s (William Shatner) teaching assistant. She has 3 other competitors, so what do you think she does? Obviously asks them out to a diplomatic dinner or lets her grades do the talking. No, she kills them. Blandly. Thus becoming what she wanted to fight. How sad.

With a constantly running inner dialogue and cliche puns and lines, Mila Kunis attempts to embody a emotionless corpse. She accomplishes the emotionless thing. She’s not that good of an actress. She just looks good on camera. There’s a constant soundtrack overpowering the movie with some lighthearted

Thanks to whoever made this picture.

There is no semblance of reality in a film that claims the opposite of American Psycho 1. First of all, I can’t call this American Psycho 2, so I’ll call this Psycho B.S. : The Movie No One Should See. Good running title. The police are terrible with missing person’s reports. The bumble around and allow Mila Kunis to kill in broad daylight. She chokes out this dude with a condom. How many B.S. flags do I need to raise? She leaves dead bodies lying around and has a rotting corpse in her closet. She would’ve been caught after attempting the first one. She’s in a COLLEGE DORM. There are people everywhere who would figure something is up. Everyone in this film is stupid.

But what can I expect from a movie directed by Morgan J. Freeman. He’s the dude creating/directing all the 16 and Pregnant episodes. He’s perpetuating a idea that it’s cool to get pregnant in high school to be on T.V. Those girls don’t need attention, they need to be placed in boxes. That show is a what not to do when it comes to sex or anything of the sort when it comes to living. I don’t feel bad for them or Freeman’s work. It’s all shit.

Basically, don’t watch this movie. It is a travesty to American Psycho and horror movies everywhere. Case closed. 0 out of 10.