The Kids Aren’t All Right 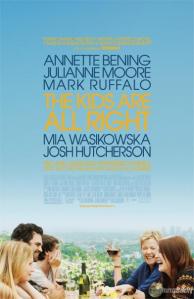 My mother, (see Everything I Know about the U.K. … I Learned from the BBC blog on WordPress.) got the movie The Kids Are All Right (2010) from the library. Not knowing a thing about this “critically acclaimed movie,”we as a family decided to give it a watch. Let me just say you see more sex acts in the first hour than you would see in most HBO or Skinemax shows. This, to say the least was a bit alarming. (Mind you I’m open to plenty of movie styles, but I’ve never been very keen to unneeded sex scenes in movies.) The idea of this movie is quite interesting, what I would call one of those Sunshine movies. What I mean by Sunshine is a movie that is given a quirky edge with heavy and hard topics, some of the more popular ones being homosexuality and death. (Examples being Little Miss Sunshine and Sunshine Cleaning. Get it? Not my bag though.) But yes, the plot of the movie is that Julianne Moore and Annette Bening are lesbians. Even the director’s a lesbian. And what do lesbians want? Children. The have one part of a two part equation for this. What do they need? Some Mark Ruffalo action. Lo and behold, two children, Mia “Alice” Wasikowska and Josh Hutcherson. Joni’s (Mia) on her way out of the house and ready for college while Laser (Josh) has a tool for a friend, and seemingly no other friends. At least Joni has a dumb slut for a friend and an Indian kid who reminds me slightly of the love interest in The Lovely Bones (and don’t get me started on that let down.) Laser (Hippy homage to Dodgeball?) wants to meet his biological dad, Paul (Mark Ruffalo) and it takes off from there. Not to toot my own horn, but I did call the need for penis/straight sex in this movie and found it to be a realistic dilemma (sort of). All in all, I didn’t find this movie to be quite the rabble-rousing, critical acclaim film I felt it was when I saw its ratings in Entertainment Weekly. I have liked Oscar buzzworthy movies in the past, this one in particular just struck me as bland. Mark Ruffalo was great, I have a real respect for him. (If you’ve seen Reservation Road, you’ll know why.) I’ve never gotten over Julianne Moore’s role snatch of Clarice in Hannibal or her performance in Evolution shortly after. Mia Wasikowska was quite good for such a small career under her belt, but what got me was how underutilized Josh Hutcherson was in this movie. He had his tuffle with his toolish friend and that was about it. Ever since he was in Little Manhattan he’s been doing great work and I’ve found him able to handle more than he’s been given. (Firehouse Dog… come on…) Other than that, this movie was okay and I’d give it a solid 7 out of 10. Until next time (and that might be soon) welcome to the abyss, I hope you’ll stay for a while.