This stoner film classic (a title I wouldn’t normally give this film, but apparently is its category/genre) is a movie I’ve been aware of for a while and have watched at least a dozen times on Comedy Central. Sitting down to watch it, uncensored for a baker’s dozen made it all the more satisfying. This outlandishly dull/dark comedy film with its underlying marijuana jokes (by that, I guess I mean jokes that would be found funnier if high) and hilarious insults, this movie kicks a lot of ass. And takes no names. Well, it takes some. But this film incorporates the great tribute to the comedic road-trip (i.e. Dumb & Dumber) and ridiculous occurrences (i.e. Meet the Spartans/any spoof movie with random appearances of randomness) and molds these two concepts into one great head trip of druggie proportions. But at the same time, it works for non-stoners like myself, with its hilarious actors.

So Dick Murphy (James Roday, star of Psych) is a down on his luck T-shirt decal shop. He’s been recently broken up with, repossessed, and poor. With nothing else to ride on, him, his brothers, and a few college friends take on the enormous

The Murphys and some strippers. Rolling hard.

task of stealing a bunch of weed from a U.S. growing site that their hippie parents used to frequent. With obstacles and hardships aplenty, its a wonder they get anywhere at all. I mean, come on, geese that attack at the provocation of a car horn. Damn, dirty goats? It all adds up to a failed trip in the making.

But no, these 5 determined men won’t give up at all in their quest for the nugs. Despite police, border patrol, and an unkind Southern hermaphroditic waitress, these men will stop at nothing to make bank with bud. After every scene, every line, I find something new and funnier to laugh at. Despite seeing it so many times, the movie just gets better with age, like a fine wine. I tip my hat Thomas Haden Church (Sideways and Spider-Man 3 actor, but more importantly Brendan Frasier’s antagonist 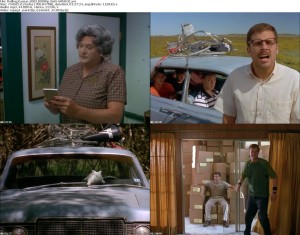 A couple of great scenes. Who knew?

in George of the Jungle) the director and writer and 2-part actor in this film for the ages.

There are some hilarious not well known actors in this film. Sam Huntington plays the crippled and angry Dinkadoo Murphy, better known as “Dinkus”. Although he has been getting more work since this and his other smaller bit roles in a few comedies, I find Sam Huntington to be far funnier than he is given credit for. Dinkus’s character is no different with his hilarious outbursts and insult thrown at anyone who pisses off the boy in the wheelchair. Charlie Finn plays Kevin Haub, confused and slightly retarded friend of the Murphys who battles the entire movie with the idea that he might be gay (inset horn sound here). This clueless character is unlike any I’ve seen before, and I could only liken it to Dumb & Dumber. Ryan McDow plays (as a one time role) Hunter Bullette, the anti-social narcoleptic with a kind soul but hulking whale body. Filling out the cast in Rip Torn, known simply as Oldman, the messiah who leads the boys to the promised land of Mary Jane. Rip must be a natural comedic actor, because ever since Dodgeball, I’ve seen him in EVERYTHING.

With such a great cast and such a simple idea, this movie is definitely worth a few views. High or sober, it doesn’t matter, I’m sure it can be appreciated by everyone. With the pursuit of a dream and some major bones, this film brings the American West into perspective painted on a faux-highway of gold bricks. With nothing safe, why wouldn’t you risk your entire livelihood for weed?