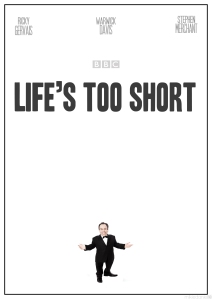 Ricky Gervais and Stephen Merchant have done it again, this time exploiting the little people. Or as they like to be called, dwarfs. The dwarven kind in this mockumentary are represented by Warwick Davis, dwarf star extraordinaire. In a fake and awkward version of his true life, Warwick Davis explores what it’s like to have no work, a divorce, and unending amount so debt. And I laughed through every second of it.

Thanks to HBO, this show and Ricky Gervais’ Animated Podcast were brought to my 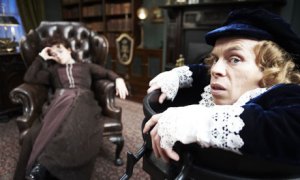 attention at the same time. I love both of them and this show was just quicker to finish (other review coming shortly). Life’s Too Short follows Warwick Davis, the person and the character, around for 7 episodes seeing just what kind of mischief he gets into in his typical life. But this isn’t your average Warwick Davis, the lovable Wicket Ewok we see when he was 11 in Star Wars: Return of the Jedi. This is something more horrendous. 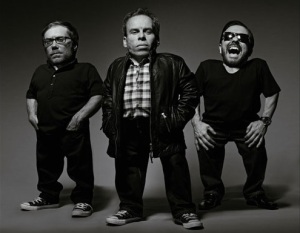 Warwick in this show is a selfish, deceitful, and overall poor sport actor down on his luck. He feels his fame should be giving him more than it is right now and he won’t let anyone get in his way. He has small man syndrome (and appropriately so) and is always offended by midget. I have a fear of midgets usually (saw Chucky too early and connected the two) but when it’s Warwick Davis, you have to love him.

I mean, look at his career. There’s Star Wars, The BBC specials of C.S. Lewis’s Narnia series, and the amazing Leprechaun series (I love it and always will. Too funny and classic.) The 10th Kingdom, my favorite, and the Harry Potter series as Flitwick, the Charms Professor. He has a better and more lucrative career than a lot of little people, and people love him for that. I haven’t seen Willow yet (a running joke in the 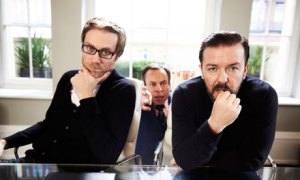 show) but I damn well plan on watching it now.

This show highlights everything that Gervais and Merchant wanted to do in The Office. After meeting Warwick in Gervais’ Extras, they started talking about this project. With my hopes up for more than a Christmas Special (come on Season 2…) I really enjoyed this awkward social situational comedy from the masters.

Every episode hits you harder than the last, with some great star appearances thrown in. I must say, I don’t like Johnny Depp, but in this show he really knows how to make fun of himself. Liam Neeson was hilarious (although unintentionally), and Sting was just a dick. I loved Warwick’s dimwitted assistant, Cheryl (Rosamund Hanson) and everything she said and how she said it was pure comic gold. I know it’s wrong to think that when Warwick falls over during the show is the funniest part, but it’s one of those old gags you never get tired of seeing. Warwick himself was funny, but he knows how funny it is for a little person to struggle in normal everyday things.

Critics said this show was too awkward and similar to The Office that Gervais and Merchant were just getting lazy. Sure they were lazy. But they were lazy with a formula that was going to work from the

beginning no matter what. I sincerely relish awkward moments in TV and movies (especially real life) and seeing a show that focuses on it to the point of painful, that’s spot on comedy. The drier and darker the better. Although I did at some points want Warwick to win some of the moments in life, it just wasn’t in the cards. Oh well, you win some, you lose most.

So with an awkward show like this and a dwarf who can poke fun at themselves, it’s fun to watch a car wreck comedy. Don’t wanna look, but can’t stop. Oh, and here’s the real Warwick for ya, just so you know where he’s coming from. Enjoy just like I enjoyed Series 1. 8.6 out of 10.